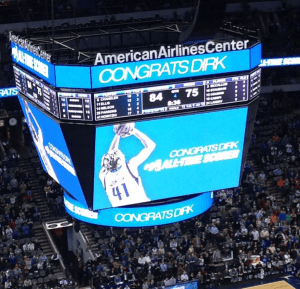 An odd twist of events occurred on Tuesday evening at the American Airlines Center in Dallas, Texas, events which happened to leave witnesses within a perplexing state of shock. Two separate games were being played within the same exact game and the details appeared to be completely ineffable to the naked eye. The game between the Dallas Mavericks and the visiting Sacramento Kings was split up into smaller sections, each and every section shining with a peculiar greatness that will be remembered in both franchises’ history. Unlike in the years before, the Mavericks knew not to underestimate this brand-new team from the River City: The Kings were bolder and brighter than they had been in the past decade. Along with very grown-up DeMarcus Cousins, a once temperamental dark spot on the sun, the Kings had completed a deadly and youthful arsenal with the spectacular offensive brilliance of Rudy Gay. “There’s no player in the league who has averaged more points in the last two games this year than Gay,” Mavericks coach Rick Carlisle expressed during Tuesday morning’s shoot around. “He’s a great player. He’s a great offensive player and we gotta do a job on him.” It was clear that the Mavericks would have their work cut out for them.

But no one was expecting this.

There was a collective groan from the crowd when Cousins put his Kings on board first, the first of six that the former temperamental center put up during that dismal first quarter. Sacramento (particularly Gay) stacked on point after point in the midst of an 8-0 run and it wasn’t until the eight minute mark when Dallas finally scored their first points as Devin Harris nailed a jumper. The Kings charged with a viciousness that this Mavs team wasn’t accustomed to seeing. The home team was down 17-4 after playing only less than seven minutes, and was quietly falling to a visiting team who had not won at the AAC in 20 games. By the end of the first, the Kings were ahead 32-14 with the Mavs shooting 23.5 percent against the Kings’ 47.6 percent.

Twitter seemed to explode under the weight of, what looked to be, a “beauty before age” blow out. 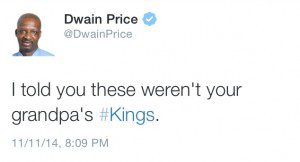 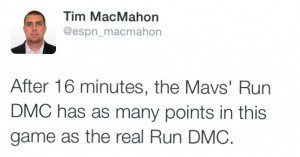 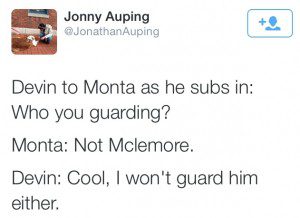 The second quarter was much of the same with Ray McCallum and Omri Casspi dropping back-to-back threes in order to put the Kings up 38-16. With 8:58 left in the half, Sacramento had created a 22-point lead as the Mavs only shot 31.8 percent from the field. Then, finally, Dallas’ stars started to shine a little brighter. Chandler Parsons, who had appeared to have had the mojo sucked out of him during the past few games, gave the home crowd a burst of energy by nailing a vociferous three. And with that, the Mavs went on a 10-3 and cut their deficit by 10 points, trailing only 40-52 with 3:45 left to go in the half. By the time both teams retired to the locker room, Sacramento was only up 57-48, with Gay leading in points with 17, while Dirk Nowitzki held his own with 11 points for Dallas.

Now, it’s important to remember that the third quarter has been a problem area for the Mavs this season and was usually set to the score of some terrifying slasher flick, so if Dallas were to take this game, they needed to perform an Oscar worthy third quarter. And out of nowhere, Monta Ellis showed up. Parsons showed up. And the big German himself, a man who was only two points shy of passing Hakeem “The Dream” Olajuwon on the NBA’s All-Time scoring list, showed up. The Mavericks took their first lead of the night at the 5:57 mark and after an impressive buzzard three from Ellis at the close of the third, Dallas was up 78-72.

The story of the night came from the vocal Dallas crowd during those final 12 minutes. Given, this was Nowitzki’s night since he was only two points away from achieving, yet another, historical milestone, but the fans in the building seemed to take a fever dream of a rare moment and turn it into a splendid and intoxicating reality. At 9:46 central time, one would have gone deaf when passing by the AAC on that chilly night. Fans surrounded Nowitzki with their blazing love after a jumper sealed his fate in the history books, and he now stood at number nine on the All-Time scoring list. Witnessing the admiration and the love the fans heeded for their Dirk as they started a chilling chant of “MVP” as Nowitzki stood tall at the free throw line, was nothing short of compelling. After being pushed by the extreme nature of fan energy in the building, the Mavericks would stun the Kings and rally right on past them, winning the game 106-98.

“Yeah, it was special to do it in front of the home crowd,” Dirk said of his milestone in the locker room following the game. “They knew exactly how many points I needed and then I made that one jumper at the top of the key and I missed like two or three before that but then I made it and they gave me a standing ovation so it was a special moment.”

The tremendous come back from the home team would take a backseat to Dirk’s achievement, and even Carlisle knew it. “It’s unbelievable, the accomplishment, but he’s going to pass more guys coming up,” he said during the post game interview. “It’s just a tribute to his greatness. Guys like him that live their entire life committed to excellence are able to do things like this and that is why he is so special.”

The Kings, who started out appearing bulletproof, were lost in the echo of the crowd’s rejuvenating screams of joy after losing the battle in the paint that evening. “Their guards got into the paint and when you turn the ball over that many times, you can’t set your defense,” Kings head coach Michael Malone said following the loss. “As their team was attacking in transition, Jameer (Nelson), Monta, and Devin Harris were getting to the rim. Obviously, we gave up some threes tonight as well. Chandler Parsons, who has gone 0 for 11 the past three games, was able to knock down five threes tonight. Offense is the beginning of defense.”

Dallas, now 5-3, continue their home stand and go on to face the Philadelphia 76ers on Thursday evening.