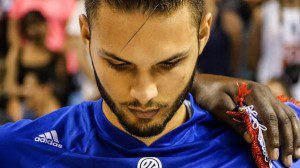 The Orlando Magic’s Evan Fournier has been a revelation for the team so far this season. Not many people expected him to have this much impact in his first season in Pinstripes, considering the player he replaced was a fringe All-Star the previous season. Fournier would continue to make more believers out of doubters with a fantastic career night in Madison Square Garden.

The Magic once again got off to an offensive groove, knocking down 10 of their 16 first quarter field goal attempts. Who led the charge? It was Evan Fournier that got things rolling for Orlando as he knocked down 5 of his first 6  shot attempts and put up 15 points in the first quarter.

The Magic managed to take a 10 point lead against the Knicks coming out of halftime, but in a game of runs, no lead is ever safe. The Knicks, led by J.R. Smith & Carmelo Anthony, obliterated the double digit deficit with a 16-4 run and even managed to take a 2-point lead heading into the final stanza of the game.

It was anybody’s game at that point. With Carmelo in foul trouble, the Magic took advantage. Evan Fournier came up big for his team, knocking down two clutch free-throws to give the Magic a 4 point lead. Carmelo would quickly answer, knocking down a huge three-pointer to cut the lead to one. Next possession, Fournier split a pair of free-throws and the Knicks had one more shot at the game. With the game in his hands, JR Smith’s attempt went wide, and the Magic walked out of the Big Apple with their 3rd win on the season.

Evan Fournier led all scorers with a career night of 28 points. Nikola Vucevic added another double-double on the year with 20 points, 13 rebounds. Tobias Harris finished with 12.

Carmelo led the Knicks with 27, followed by J.R. Smith with 19 off the bench. Iman Shumpert, and Jason Smith both had 10 apiece.

The Magic return to Orlando to face the second overall pick, Jabari Parker and the Milwaukee Bucks on Friday.