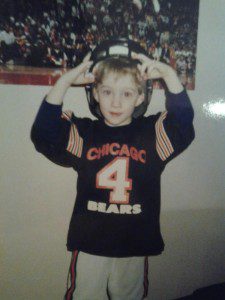 At some point during the first half of the Green Bay Packers’ thrashing of the Chicago Bears on Sunday Night Football last weekend, my girlfriend Maria asked my Dad and I why we cared so much that the Bears were losing. Now for someone who doesn’t care all that much about sports, no answer would be deemed acceptable. We couldn’t just say, “It’s our favorite team,” or “We’re both lifelong fans,” because a non-sports fan wouldn’t get that. Those kinds of answers don’t resonate with people who don’t take sports way too seriously.

I tell Maria all the time that she needs to watch the movie Fever Pitch. Now sure, I’m a fan of the flick because I find Jimmy Fallon hilarious, Drew Barrymore adorable, and I think they have pretty good chemistry throughout the movie. It’s a romantic comedy that masquerades as a sports movie, but there is a lesson to be learned if you are dating a real sports fan, like Drew Barrymore’s character does in the movie. Real sports fans tend to be delusional, passionate, and non-sexually monogamous (if that makes sense). It’s why the Drew Barrymore/Jimmy Fallon relationship ultimately works in Fever Pitch (oops, should’ve hit you with a Spoiler Alert there).

Lindsey (Barrymore) falls for Ben (Fallon) because she sees the way he loves the Boston Red Sox and believes that he could love her that way too. Ben loves Lindsey because she loves him back and that’s something the Red Sox can’t do. Or something like that. Either way, a major point of the story is Lindsey having to learn what it’s like to date and be a sports fan, and deal with all of the heartbreak that comes with it.

I’m not quite as crazy as Ben—though this probably has to do with the fact that I don’t have season tickets to any of my favorite teams like he does; otherwise, I’d be right on par with him—but I do belong to that very large group of sports fans who are delusional and unwaveringly passionate. My Dad put it best: “Having a team that you are unconditionally committed to is a hard thing to describe. It is comforting and torturous at the same time.”

That’s a perfect way to describe it. I put way too much into games which I have absolutely no control over and cried because of wins AND losses. I’m going to opt not to reveal the last time I did so for either result. Some people reading this will know what I’m talking about and easily relate to me. Just like me, they know the thrill of victory and the agony of defeat all too well. Other people reading this probably think I’m an emotionally fragile freak who has no life. I can’t completely disagree with you.

The Chicago Bears are my longest running favorite team.  I was basically born into it in 1992 and am happy to say that I’ve been a part of that group for almost 23 years now. Even though I missed the 1985 Bears by almost seven years, I still hold on to that team and all the other great Bears teams and players like I was there when they were around.

Now more than ever all of the great Bears teams seem long-gone, and for me, almost non-existent. It’s not like Chicago has had an overwhelming amount of success in my lifetime. Since 1992 the Bears are 176-185 (counting their nine games this year), with five playoff appearances (1994, 2001, 2005, 2006, and 2010) and one Super Bowl loss. Sure, Bears fans aren’t quite as tortured as other fan bases—hello to all of my friends back home who are Buffalo Bills fans—but it’s not like I’m a 22-year-old kid from Boston who started loving football right around the time Tom Brady came into the league and now I’m here complaining because my team hasn’t won a Super Bowl since 2004. I have legitimate reasons to bitch.

For the first time in my life, my favorite football team completely, unequivocally sucks at football and can be classified as a total disappointment. You can go back through the Bears’ year-by-year record and you’ll see that there were some crappy teams over these last 22 years, and I’m no stranger to that. I’ve been a fan of bad football teams, but at least they were supposed to be bad. The NFL is a quarterback-driven league, right? Well every quarterback essentially falls into one of three categories. Either he can be in his prime, past his prime or someone who never had a prime. Since 1992, the Bears have started 26 quarterbacks.

Before I continue, a few thoughts on this exercise:

You get the point, right? I grew up cheering for a team that annually had a very low offensive ceiling. Until Jay Cutler, Brandon Marshall, Alshon Jeffery, and Matt Forte came along our offense was a disaster that was spearheaded by the aforementioned quarterbacks and playmakers like Marty Booker, a past-his-prime Muhsin Muhammad, Cedric Benson, Anthony “A-Train” Thomas, Johnny Knox, Bernard Berrian, Curtis Conway, Rahsaan Salaam, Marcus Robinson, Curtis Enis, David Terrell, and Tom Waddle. Every single one of those players led the team in either rushing or receiving yards from 1992 through 2011.

For the majority of my existence the Bears trademark has been a disciplined and opportunistic defense that always hovered between league average and historically impressive. The offense was generally the issue for the reasons that I just explained. Over the last five or so years, that narrative was slowly beginning to change. For the first time in my existence, the Bears acquired a quarterback who many believed was actually more than just a game manager when they traded for Jay Cutler in the 2009 offseason.

Forte has been one of the best all-around running backs in the league since he was drafted in 2008 and the dynamic wide receiver duo of Marshall and Jeffery was considered one of the most explosive tandems in the NFL. Before the 2013 season, the Bears hired offensive mastermind Marc Trestman to take the reins as head coach from defensive-minded Lovie Smith. This was supposed to be the year that the Bears offense fired on all cylinders. It was also supposed to be the year that a young and injury-plagued defense started putting it together.

And now, as a fan of the team, I’m conflicted. I will be a Chicago Bears fan until the day I die—or until the day the NFL ceases to exist; whichever comes first. That isn’t my conflict. I’m not jumping to another team. However, I am conflicted as to whether I should be rooting for my team to win or lose for the remaining seven games of the season.

At 3-6 the Bears would need to rattle off a 7-0 stretch to end the season with a shot at the playoffs. Even then, it’s not a certainty that they’d make it. The last thing I want is for another season to go by where the Bears post a 7-9, 8-8, or 9-7 record, just good enough for Phil Emery, Marc Trestman, and the McCaskey’s to just shrug their shoulders and say, “Eh, it’ll be better next year.”

It won’t be better next year. It’s just not that simple. This isn’t a team that is one piece away, even if management, personnel, and fans want to believe. Shoot, I believed it. Before the season I actually talked myself into believing that if the defense could be league average the Bears had a shot to make the Super Bowl. You know what that makes me? Let Gnarls Barkley tell you.

At this point I’m ready for a total overhaul. I’m ready for a culture change. I’m ready for Trestman to go, Emery to go, Cutler to go, and for the McCaskey’s to sell the team to someone who actually gives a shit. The only way that happens is if the Bears blow their next seven and more and more stories about how atrocious the team is and how inept Emery and Trestman seem to be continue to get released. The Bears have the oldest roster in the league and more holes than Swiss cheese, so this likely won’t be an overnight transformation into a juggernaut. But I can be patient as long as tangible moves are being made to ensure a better future for the team I love, whatever those moves may be.