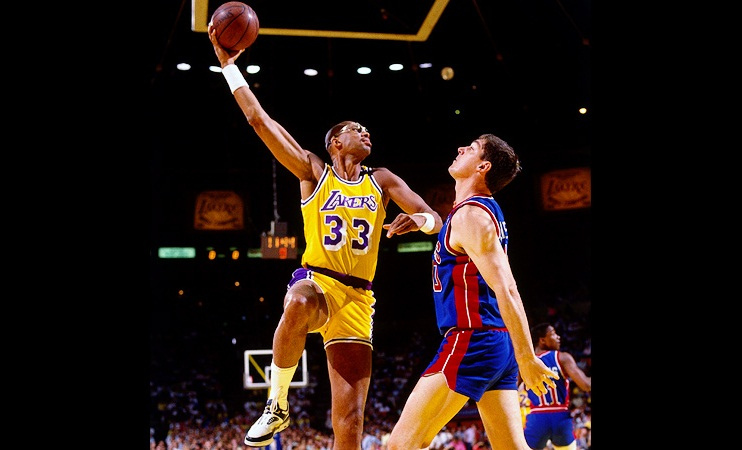 It’s Friday, and that means it’s time for another edition of TGIFF: Thank God It’s Flashback Friday. The past couple weeks I’ve tossed two 1st Round NBA playoff games your way so you can get used to the process. Today, we’re taking the metaphorical swimmies off and diving into the deep end. It’s time to go back in time to an NBA Finals Game 7!

The Lakers entered the 1988 NBA Finals as the defending champions on a quest to repeat. In case it wasn’t common sense for everyone to realize that this was LA’s intention, Pat Riley let everybody know after the Lakers won the 1987 NBA title by guaranteeing another one the following year. The Pistons on the other hand were possibly a successful Isiah Thomas inbounds pass away from facing off with the Lakers in the Finals. Of course though, Larry Bird stole the ball and found a cutting Dennis Johnson for the game-winning layup in Game 5 of the Eastern Conference Finals and the Celtics went on to win the series in seven games.

The Pistons would end up defeating the Celtics in the 1988 Eastern Conference Finals, and eventually hold a 3-2 series lead against the Lakers in the Finals. In Game 6, Pistons point guard Isiah Thomas badly sprained his ankle, but still put forth one of the all-time great postseason performances in league history, scoring 43 points total, including 25 in the third quarter alone. The Lakers would steal Game 6 by one point, forcing a Game 7 in Los Angeles. Of course, for a Game 7 of the NBA Finals, it’s only fitting that I break out a retrospective running diary of the 2nd half of the game, right? Well, whether you like it or not, that’s what you’re getting. But first, a shortened, first-half version of my handy-dandy notebook.

The 1st Half Notes

The 2nd Half Diary

12:00 left in the quarter- Dick Stockton comes back from the halftime break and tells us that the team that has led at halftime in each game has gone on to win each respective game. Well, Detroit is up 52-47 at half, and they chose to start John Salley in place of Rick Mahorn to begin the 2nd half. A scorching-hot James Worthy had 20 points in the 1st half and Chuck Daly needed to do something to slow him down.

9:28- Stop me if you’ve heard this before; the Lakers are getting out and running and Detroit can’t do much to stop it. The Lakers wing players absolutely flew down the floor and Magic Johnson never—repeat, NEVER—screwed up those three on two breaks. In fairness though, Magic didn’t have guys running the floor who were spotting up for three’s when they could be getting easy layups. I love basketball, and in a lot of ways I’m very happy with the way the game has progressed over time. I’ll never get why teams squander easy chances for two points on three on two, four on two or even two on one fast breaks in exchange for looks from downtown. Didn’t any of these guys watch the Showtime Lakers and how they ran on fast breaks like it was an assembly line?

7:30- Kareem Abdul-Jabbar gets his first basket of the game with a patented skyhook. Kareem is one of the best players of all-time, but there is just no denying the fact that by 1988 Kareem was pretty washed up. Sure, he drew a foul late in Game 6 and coolly knocked down two freebies to give the Lakers the lead and the eventual win, but he was largely a non-factor by this point in his career. And as Bill Simmons mentioned in The Book of Basketball, he looked like an alien. It’s true, I can’t deny it.

6:40- After another Lakers fast break score Chuck Daly calls a quick timeout as LA’s lead balloons to seven-points. For anyone who has been waiting for a mention of Bill Laimbeer being an asshole, the time has come. For no good reason Laimbeer gave Byron Scott a shove as the two teams were heading to their benches. Scott pushed back, Kareem and Rodman got involved and then things fizzled out. Reason number 158 that you know this game was played in 1988 and not 2014: only Bill Laimbeer got a technical foul. Nothing for Scott. Nothing for Kareem. Nothing for every other guy who got involved in the dust up. It took the refs about thirty seconds to even realize that anything was going on.

6:40- Reason number 159 that you know this game was played in 1988 and not 2014: there is a ton of exposed thigh in this basketball game, and I’m not talking about the Laker girls. #NutHuggers

6:40- Reason number 160 that you know this game was played in 1988 and not 2014: the clock and scoreboard isn’t an every second fixture. You only got glimpses of the score after a made basket and I’m pretty sure mentions of the time were totally random. Like there was some dude sitting in a production truck somewhere whose sole job was to make sure the time was shown sporadically, only he’d disappear for four minutes at a time.

4:40- The Lakers open up the 3rd quarter shooting 11 for 11, and all of their looks were good looks. It’s like watching a machine that’s firing on all cylinders. Layup. Layup. Mid-range jumper. Layup. Three-pointer (yup, they actually took a few three’s back in the day). Layup. If you’re a basketball purist like myself it’s beautiful to watch.

3:30?- Another layup for the Lakers as their lead extends to 10. By the way, I’m really enjoying the Stockton/Cunningham announce duo. Stockton is an awesome play-by-play guy and he mixes in a fair amount of semi-obvious statements that keep me giggling. At one point in the third quarter he nonchalantly tells us “the Lakers are playing like they really want this.” That’s profound stuff right there.

2:30?- The Lakers and Pistons both go small, and I’m going to go out on a limb and guess that the Pistons chip away at the lead with a Vinnie Johnson, Joe Dumars, Adrian Dantley, Dennis Rodman and John Salley quintet on the floor.

0:00- Well, the Lakers lead stayed at 10 once Detroit went small, so thus far we can’t determine if I’m wrong or not. I can determine that if the Lakers shoot 147 percent from the field again in the 4th quarter they are going to win this game by a significant margin. All shooting percentages are approximate.

4th Quarter 10:38- A wide open Michael Cooper three-pointer extends the Lakers lead to 15—their biggest lead of the game—and results in an angry Chuck Daly calling another timeout, followed by a pissed-off and totally ineffective Isiah Thomas throwing the ball at Cooper as the Pistons went to their bench. Would you believe me if I told you the refs didn’t call a technical foul?

9:40?- After Mychal Thompson misses a wide open alley-oop layup off a nice dish from Magic, Salley gets a layup at the other end. Billy C. comments on how with Salley you can see a star being born. Yes sir, a movie star!

6:42- With the Pistons on a 6-0 run and Isiah Thomas on the bench, you have to wonder how a healthy Isiah changes this series. Does Detroit close it out in Game 6? Would they have been able to beat LA, in LA, in a Game 7, if Isiah were able to play more than 28 minutes? We’ll never know for sure, but it’s easy to assume that they would’ve. Game 6 was stolen from them and they hung around in Game 7

5:20- Just thought you guys should know that this is an old man on the Pistons bench—I’ll assume that he’s an assistant coach—who has just a wonderful blondish-white bowl cut. It’s a glorious mane.

4:04- After a Magic Johnson baby hook to push the Lakers lead back up to eight we immediately get a split screen view of Chuck Daly and Pat Riley. I like this late-eighties technological innovation and wish it were something the league still utilized today.

2:45- O.K., we’ve had five split screens of Daly and Riley in the last 80 seconds. I retract my previous statement. I don’t need to see a duo of flustered coaches every 15 seconds. Oh yeah, a Dennis Rodman fast break layup has cut the Lakers lead to two. I don’t have any idea how Detroit is in this game. Their best player is sitting on the bench and they’ve relied on an unhealthy dose of Vinnie “The Microwave” Johnson in this fourth quarter to get back into it. Just imagine if Tony Parker went down in Game 7 of the NBA Finals and Patty Mills were carrying the Spurs late in the 4th quarter. Actually, that’s a bad example because that would most likely end up working for San Antonio. Just imagine if the Clippers were in the Finals and Chris Paul couldn’t play and suddenly Jordan Farmar was jacking up a ton of shots. That’s what this feels like.

1:14- Magic Johnson splits a pair of free-throws and the Lakers are up 103-100. Even though I know the result of this game I’m tense right now. It seems like Los Angeles should be up big, but Detroit really dug in in the final quarter, holding LA to three field goals in these last six minutes of the of the game.

1:05- Bill Laimbeer gets a pretty clean look from downtown to tie the game but can’t hit it, nor can he collect the long offensive rebound chance afterward. Lakers ball.

0:30- A pretty wild sequence: With the Lakers up by three points James Worthy attacks the rim but gets blocked by Salley. The Pistons get out and run and Dennis Rodman takes a totally ill-advised jumper. Here’s where things get wacky. Byron Scott skies for the rebound over Salley and Laimbeer and comes down out of bounds. I’m not saying he might have come down out of bounds or it’s a possibility he was out of bounds. He was out of bounds. Even with fuzzy video quality, it was pretty clear that Scott’s right foot was out of bounds. No call. No review. And Scott ended up knocking down two free-throws to ice it for LA.

0:00- Reason number 161 you know that this game was played in 1988 and not 2014: after the final buzzer sounds and the Lakers clinch a second straight title with a 108-105 win, the crowd at the Forum storms the court. Shit, with two seconds left and the Pistons inbounding only down by three points there were fans filtering onto the court. That just doesn’t seem fair. Isiah getting hurt isn’t fair. Fans having to watch professional athletes compete for a title wearing bottoms that reveal more than you’ll see in the Miss USA Pageant isn’t fair either. Life just isn’t fair. At least you know you get to come back here next week for another trip down memory lane.

If you want to watch the game in its entirety, you can do so by clicking here.