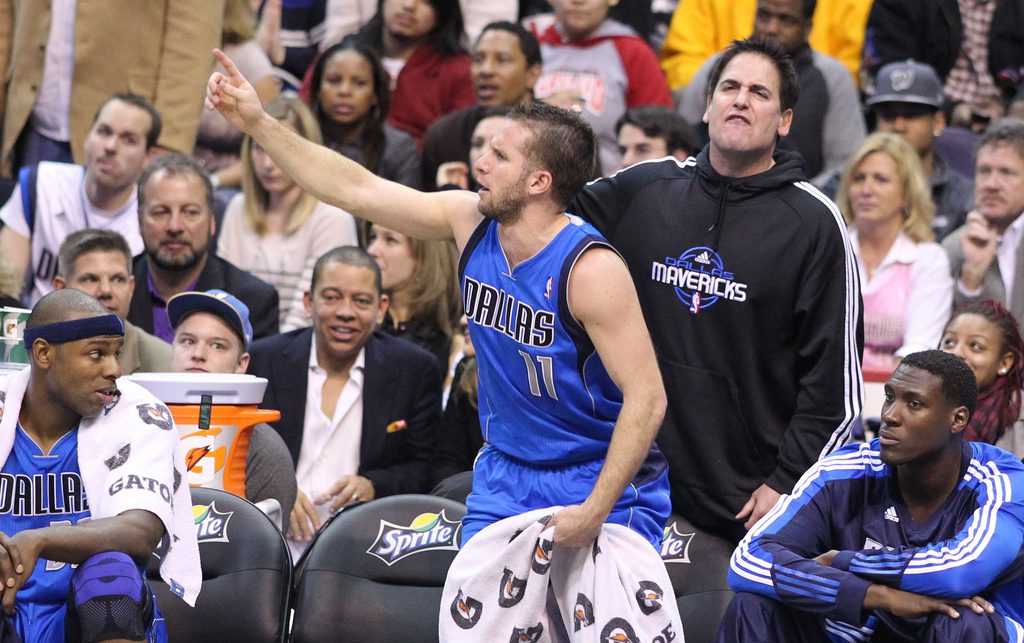 In this surprising edition of “What the F**k Was That?” the Dallas Mavericks set a new standard of creativity while Tyson Chandler, their starting center, was sidelined with back spasms. On Sunday evening, Mavericks coach Rick Carlisle, in his anticipated 1,000th game, was faced with a puzzling dilemma: Who was going to play the 5-position with Chandler out against the very physical, not to mention powerful, Oklahoma City Thunder?

The starting lineup seemed dexterously manufactured on the whim of a crazy man, not by the calm and salient coach: Monta Ellis, Chandler Parsons, Dirk Nowitzki, Rajon Rondo, and J.J. Barea, with Nowitzki playing center and Barea playing the three-position. What, what?

“I was taking a nap this afternoon and I had a weird nightmare about coaching against a Don Nelson team,” Carlisle said of starting a small five. “Then I got up and checked my phone and there was a text from Casey Smith saying Tyson was out tonight. So it just got me thinking that we needed to try something different against this team because athletically and strength wise, we just don’t match up.”

The key to conquering this game would end up being the ability to contain Russell Westbrook, who has been a powerhouse in the absence of Kevin Durant. Dallas opened up the game with an 11-4 run and drew first blood, but after a Thunder 8-2 spurt, the Mavericks were forced to take a time out with 5:04 on the clock, leading only 24-20. Parsons caught fire during this time by shooting 6-of-8 from the field and tacked on 15 points in order to push the Mavs forward 33-26 by the close of the first.

“I just got in a rhythm early,” Parsons said of his offensive performance. “Got an easy basket, the rim just opened up and was able to hit some shots early. I just got hot and stayed aggressive.”

During the second quarter, Dallas would go on a late 11-0 run, hoping to take a significant lead into the locker room, but glitches (such as Devin Harris’ odd looking three-point shot and a failed Raymond Felton appearance) would send the Mavs into the locker room leading by only six points, 64-58. OKC outshot the Mavs 54.2 percent to 46.7 percent in addition to a 27-19 rebounding edge. However, Dallas made 13 points off 12 Thunder turnovers, which kept them slightly ahead.

Gasps of panic from the home crowd at the American Airlines Center would dominate the second half as Rondo was treated for a cut above his eye, which appeared to make him look nauseated as he continued to play. Not only that, but the edge that kept Westbrook at bay was starting to dull, and OKC came roaring back to tie it up due to poor rim protection. However, the real scare of the game came with only a couple minutes remaining in the fourth, when Ellis collapsed to the ground clutching his left ankle. After a few beats of hugging the floorboards, Monta rose and made his way to the bench on his own accord but walking gingerly. The Thunder took advantage of an Ellis-less team, and attempted to slow down the already seemingly tired looking offense, only to awaken some sort of sleeping dragon. The Mavericks would go on to win 112-107, Nowitzki leading the way with a season-high 30 points for the Mavericks as opposed to Serge Ibaka‘s 26 points for OKC.

“Look at the rebounds, they were a wipeout,” Carlisle pointed out. “We lose by 16, which is better than the Lakers game where we lost by 23. In a lot of situations where we could have had rebounds, there were loose ball fouls called and Dirk was shooting free throws, which helped us as well. Not everybody was shooting the ball great, but we scrambled well all night and that’s the reason we won.”

The Mavericks look to Tuesday evening where they face the visiting Washington Wizards.