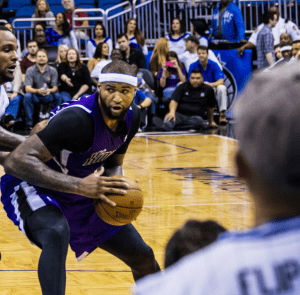 The Sacramento Kings displayed their tendency to give up leads late in contests against the New York Knicks on Saturday night, allowing the game to enter overtime before pulling out the 135-129 victory.

With all the uncertainties that have brought a dive in the Kings’ performance this year, from the elongated absence of DeMarcus Cousins to the firing of Mike Malone, games against sub-par teams like the Knicks have been problematic.

In the first quarter, however, Sacramento jumped on New York’s lacking inside presence by abusing Cole Aldrich down low and feeding Cousins in the paint over and over. He got off to a fast start as the Knicks clearly lack big men with the ability to slow dominant offensive centers. Quincy Acy and Amar’e Stoudemire were also sidelined for this matchup, making playing defense on Cousins that much harder.

He finished the game with 39 points, 11 rebounds, four assists, and a three-pointer.

Rudy Gay held the responsibility of checking Carmelo Anthony, whose natural scoring ability hasn’t slowed despite a terrible New York offense. Both players had impressive offensive performances despite the pressing defense they played on each other.

Gay had 29 points, three assists, and two rebounds. He took 21 shots from the field.

As well as the Kings played early in the game, they managed to open the door for a Knicks comeback by loosening up on defense and allowing Anthony and others to take open shots. Tim Hardaway Jr. contributed 19 points in 29 minutes throughout the game, and Cole Aldrich put up 18 points and grabbed seven boards. The contributions came from many sources as New York played themselves back into the game.

Sacramento allowed New York a chance to take the game in regulation on a mid-range game-winning attempt from Anthony, but the shot was blocked by Gay whose defense didn’t waver, despite the 43 minutes he played.

The overtime possession would feature Cousins continuing to attack Aldrich in the paint until he fouled out of the game. He delivered the Kings to this win in overtime, as they lacked on both sides of the ball toward the end of regulation.

“We had ups and downs and lost the lead,” stated Corbin. “But to fight the way we did in overtime and get this win before the road trip says a lot about who we are.”

Alongside Cousins’ and Gay’s performances throughout the game was that of Darren Collison, who scored the ball ultra-efficiently and shot 90 percent from the field with three three-pointers. Cousins, Gay, and Collison combined for a massive 95 of the Kings’ 135 points.
Sacramento has issues to address when it comes to holding onto leads and closing out games, but the upside to this overtime victory is that Cousins took over the game when he needed to. He owned the last few minutes of overtime, dominating the match ups he saw down low.