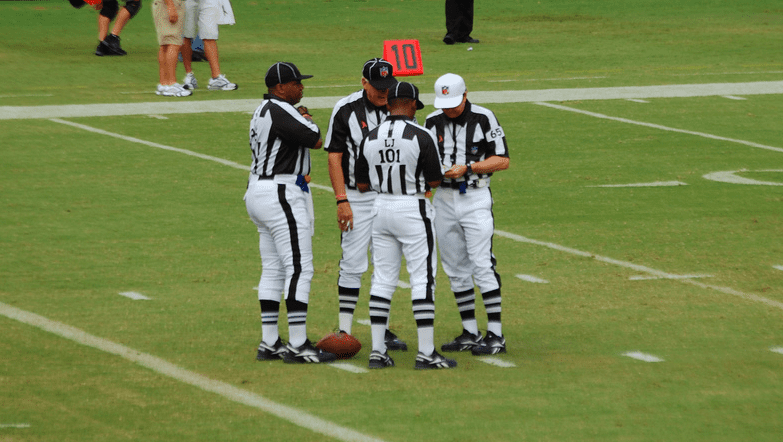 The NFL Wild-Card Weekend produced a lot of very predictable games and outcomes (so much as that I was 4-0 on my picks), with one game standing above the others on all levels. The Dallas Cowboys beat the Detroit Lions in a style that has yet to find a name this past Sunday. At the center of the back and forth was a controversial call, then non-call that could have changed the game.

As always, I feel the need to mention the fact that I am a Cowboys fan. So please believe me when I say that the pass interference call on Anthony Hitchens was indeed pass interference. Pete Morelli and his crew threw the flag, I believe the call was announced to the stadium, Anthony Hitchens even looked like he knew he was guilty, and yet the flag was picked up. The flag was actually thrown by the back judge, who would have seen mostly the back of Lions wide receiver Brandon Pettigrew. The head linesman disagreed, and ultimately Morelli sided with him. It is worth noting that the crew Morelli was given was not his normal officiating crew. In the playoffs the referees are jumbled. Some would argue this helps reduce player favoritism, or that it makes it harder to bribe an entire crew of officials (though I imagine people in Detroit assume the fix was in).

As someone who intently watched the entire game, I thought that overall the officiating was average. Calls were made and missed on both sides. Detroit got a correct call of “running into the kicker” that changed things from Dallas taking over on the Detroit side of the 50, to the net outcome of the extended drive which ended with a Lions touchdown. Dallas got called for offensive pass interference on a “pick play” (a player acting as a barrier to a defender attempting to cover someone, without actually blocking them). On two seemingly identical plays Detroit was not flagged for running into the Dallas punter, or for a pick on a pass reception that extended a Detroit drive in the second quarter.

If you are a football fan should you be upset by this egregious error in officiating? Yes, you have every right to be, specifically if you’re a Detroit fan. Even as a Dallas fan I hate the idea that as Dallas goes on in the playoffs the discussion will be “well, they shouldn’t even be here, if not for that missed call, that wasn’t even really missed.” With that said, players and coaches can’t change these things, all you can do is go out and try show that you are the better team, no matter the circumstances.

Ndomukong Suh had his one game suspension lifted by a league arbitrator (the one game would have been this one). The only person saying that this wasn’t just was Aaron Rodgers (the player Suh stepped on to earn the suspension in the first place). I didn’t hear one player or coach for the Dallas Cowboys saying anything negative about the decision, and they were all asked. The Lions had their chances to win the game that were not that one missed call. Putting aside the fact the Lions opted to pass the ball on a third-and-one instead of running for it. The Lions had over two minutes and two timeouts to score the go-ahead touchdown. The Lions had the entire third and fourth quarter to score more than the three points that they did put on the board. Let’s not forget their defense did allow the Cowboys to put up 17 second-half points. No game comes entirely down to one play.

If Dallas had lost I firmly believe that the critics of Tony Romo wouldn’t have burned him at the cross for his efforts. He posted two touchdowns with no interceptions, a QB rating of over 100 and he was given next to no time as he was sacked more than I can count on one hand and was hit virtually every time he threw. Dallas had a myriad of plays where they made critical mistakes during the game, and pointing to any one of them as the sole reason for the loss (had they lost) is foolish. Yes, the play was so obvious a blind person watching a different game likely could have still made it, but don’t think that this one play was the lone reason Detroit is heading home without a victory. The referees did certainly have an impact, but they didn’t decide the outcome of the game. The collective play of the Detroit Lions compared to that of the Dallas Cowboys for four quarters was the deciding factor. The Cowboys were the better team on the whole that day. The net result bore that out, not the referees.