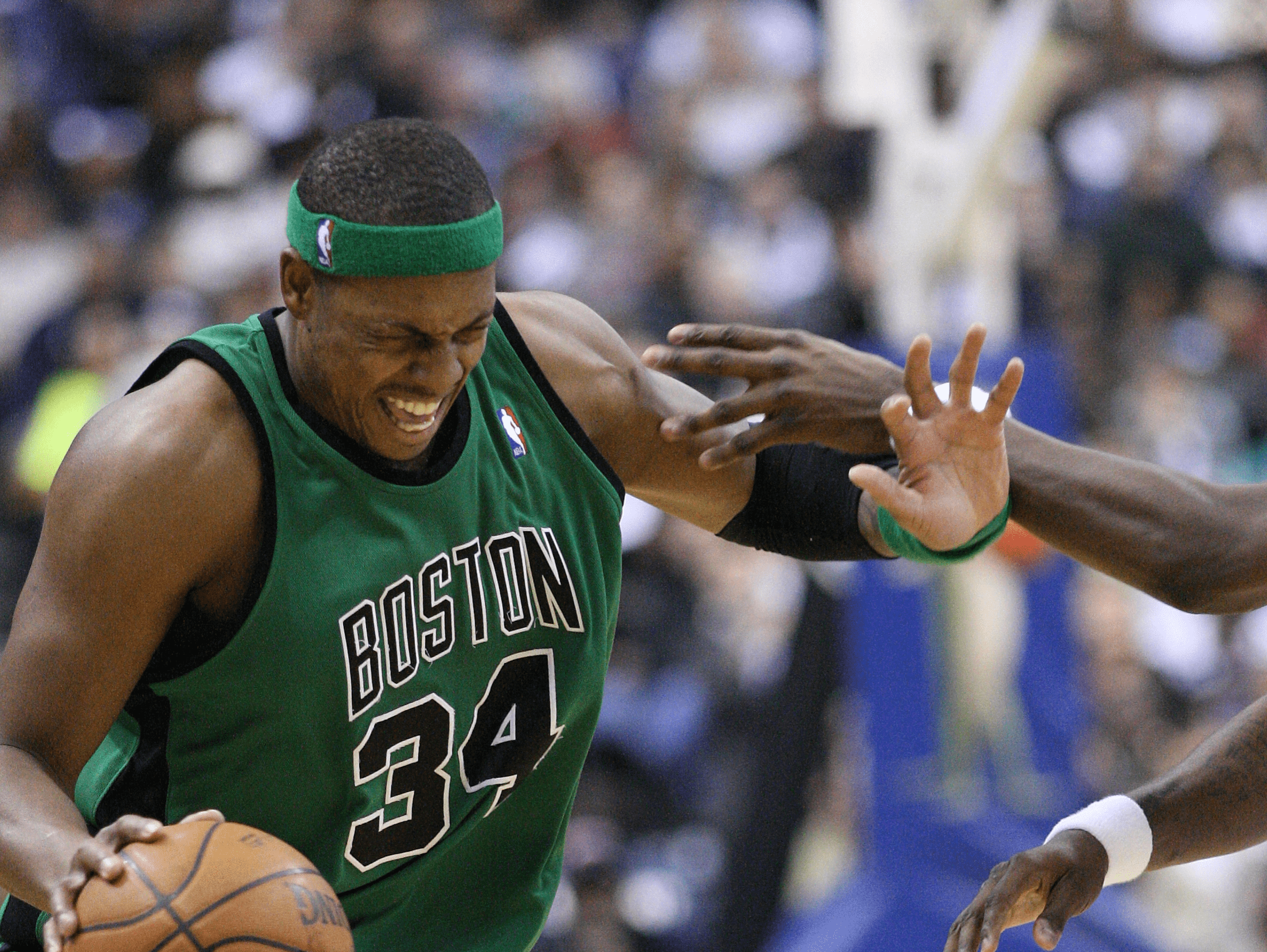 I certainly hope everyone had a delightful holiday season. It’s been quite a while since we’ve flashed back to a classic game in NBA history, and I’m more than ready to hop back in that metaphorical time machine and take it for a spin.

Wait, what? You’re already discouraged because we’re going back to arguably one of the worst time periods for Eastern Conference basketball, even worse than it is today? I haven’t even gotten into the running diary yet! Look I get your frustration. The majority of this game was tough to look at, but I promise, this rock fight is worth watching. The New Jersey Nets were the top team in the Eastern Conference during the regular season, but dropped Game 1 of the Eastern Conference Finals to the frisky third seeded Boston Celtics, led by Paul Pierce, Antoine Walker, and the aura of Celtic pride. Coming into Game 3 the series was tied at one game apiece and the then Fleet Center crowd was all fired up for a meaningful Celtic playoff game after a decade-long drought.

It’s the NBA on NBC! That’s something to be excited about guys! And to be honest, it was probably the fifth best part of this game behind: A) (SPOILER ALERT!) The huge Celtics 4th-quarter comeback, B) Watching Todd MacCulloch play meaningful minutes in an Eastern Conference Finals game, C) Seeing Paul Pierce without that patchy facial hair, D) Remembering that Jason Kidd used to blow kisses towards the basket before taking free throws.

The announcers for the game were the always fantastic Mike Breen and a stealthily underrated PJ Carlesimo, making his first appearance in a Thank God It’s Flashback Friday column. The starting lineups for the game were Jason Kidd, Kerry Kittles—such a fun name—Keith Van Horn, Kenyon Martin, and Todd MacCulloch for New Jersey, and Kenny Anderson, Paul Pierce, Eric Williams, Antoine Walker, and Tony Battie taking the floor for the Celtics. Coaching for the Nets and Celtics are Byron Scott and Jim O’Brien respectively. I can feel how underwhelmed you are, and for good reason.

The first three quarters were not only boring, but a blowout. New Jersey jumped out to a 22-6 lead early in the 1st quarter, and then after allowing Boston to cut the lead to six in the 2nd frame, the Nets went on a 16-2 run to end the 1st half and extend their lead to 20.

The Celtics trailed by 25 with 13 minutes left in the game. At that point Boston had 49 points, Paul Pierce was 2-14 from the field, and it looked like there was a better chance of Zazu becoming “The Lion King” than there was of Boston winning this game. But you know how the NBA is. So let’s dive right into this 4th quarter and watch what would at the time be the largest 4th quarter deficit overcome in an NBA Playoff game.

12:00 minutes left in the quarter- The Celtics trail 74-53, and like I said, things look murky at best for Boston. Right out of the gate, Pierce drives to the hoop and gets a pretty easy lay-up. The comeback begins! I have to say, Carlesimo and Breen frequently praised both the Nets and Celtics for playing good defense in this game, and eight times out of ten I was leaning towards “bad offense” over “good defense,” but New Jersey did make it difficult for Pierce through the first three quarters.

10:30- And just like that, the Celtics have cut it to fourteen thanks to a ‘Toine Walker lefty lay-in followed by a Pierce “And One.” That doesn’t sound like a milestone, but at the time it was the closest the Celtics had been to the Nets in probably an hour real time.

10:04- Granted, Richard Jefferson was a rookie, but what Paul Pierce has done to him on three out of five possessions in the last two minutes is pretty embarrassing. Each time Pierce caught the ball on the wing and just blew by an at-the-time-very-spry Jefferson like he was stuck in quicksand. Yes, quicksand. Just let Shane Falco tell you about how much trouble quicksand can be.

I digress. The Celtics deficit is cut to 12 and Byron Scott takes a much needed time out.

9:56- Coming back from the timeout we have Lewis Johnson interviewing NBA Commissioner David Stern. I have to hand it to the Fleet Center crowd, they were so loud throughout the interview that I couldn’t even hear what Stern and Lewis were talking about. I don’t suspect that Lewis Johnson asked the Commish how flagrantly he was going to eventually have the referees attempt to keep the Los Angeles Lakers alive in the Western Conference Finals, but I can’t be totally sure. Anyway, back to the game.

9:10- Reason #49 you know this game was played in 2002 and not 2015: The Nets have appeared to begin doubling Pierce whenever he catches the ball, and on the first possession it led to a wide open elbow jumper for Kenny Anderson. In today’s NBA, Kenny Anderson isn’t getting minutes and somebody is getting a wide open look from downtown. Either way, Anderson buried it and the Nets lead has been cut to ten.

5:46- Reason #50 you know this game was played in 2002 and not 2015: Aaron Williams has been the workhorse for the Nets offense. Actually, what am I saying? This isn’t an indicator of 2002. It’s more of an indicator of a team that is eventually going to get unmercifully swept in the NBA Finals. Williams converts on a driving shot, draws the foul and the Nets go back up by 12 with his free throw.

4:00- Alright, we’re going to pause this game with four minutes left and take a breather. We need to go over a few things. So far in the fourth quarter Paul Pierce and Aaron Williams are the two leading scorers. Tony Delk has played a major role for the Celtics—he buried a corner three and has made a bunch of hustle plays so far in the quarter—and Richard Jefferson was replaced by Keith Van Horn because he was having so much trouble dealing with Paul Pierce. Jason Kidd hasn’t scored or assisted on a made basket in the quarter despite playing all eight minutes so far. I swear to God this game actually happened. I’ll even give you the link to it and everything.

And as if this weren’t difficult enough to believe, the Celtics still trail by ten and they do eventually win this game. O.K., let’s get back to it.

2:41- A running diary is sort of tough to conduct when there are a lot of whistles and a ton of free throws, and in some respect it makes the game a little anticlimactic. In this one, it tells a pretty interesting story. Over the last 80 seconds of game action Boston has outworked New Jersey at all five positions on each end of the floor, and it paid off in three trips to the free throw line simply because New Jersey’s defense on the perimeter was lazy. It’s 88-84 and once again, the Fleet Center is electric. Thank God that arena isn’t called the Fleet Center anymore.

1:15- With the Nets lead down to three, Rodney Rogers steps in and draws a charge on Nets guard Lucious Harris, who was wearing a Rip Hamilton mask before Hamilton even made it cool. Just for the record, the crunch time line-ups for these teams are Tony Delk, Kenny Anderson, Paul Pierce, Antoine Walker and Rogers for Boston, and Jason Kidd, Harris, Kerry Kittles, Kenyon Martin and Aaron Williams for New Jersey. And yes, it was an absolute certainty that one of these two teams had to play in the NBA Finals. Now you know why I’m all for an adjustment to the NBA Playoffs format.

42.1 seconds- As Paul Pierce steps to the line with the Celtics down by just a point, a graphic flashes on the screen that in NBA Playoff history teams that led by 19+ points entering the 4th quarter were 171-0. Well, that was about to change and not in New Jersey’s favor. Pierce, as cool as the other side of the pillow (© Stuart Scott), knocked both free throws down and the Celtics, whose only lead thus far in the game had been 1-0 in the opening minute, were now ahead with 42.1 seconds left.

On the next possession Kerry Kittles threw the ball away and Kenny Anderson’s lay-up attempt on the other end was goaltended. Boston, now up by three points, would tack on one more free throw and eventually win the game by the final score of 94-90.

I’m not sure how much of the credit/blame pie should be given to the Celtics (for making the amazing comeback), the Nets (for giving up 41 points in the 4th quarter and completely locking up offensively) or the refs (for putting the Celtics at the free throw line 21 times in the 4th quarter). Just kidding about the refs, we can’t say they dictate games. Well, until next week, when I go back to 2002 and look at a Western Conference Finals game.

After watching the game in its entirety again, you can’t discuss the comeback without throwing some blame at Jason Kidd (he was 0 for 5 shooting in the 4th quarter and had more assists than turnovers), Richard Jefferson (for being so badly beaten by Pierce early in the 4th quarter that Byron Scott had to turn to Keith Van Horn and Aaron Williams instead), and the Nets team as a whole for taking their collective foot off of the gas pedal.

Additionally, it needs to be mentioned that Antoine Walker gave a rah-rah speech to the rest of the Celtics at the end of the 3rd quarter and it possibly turned the game around. Pierce attacked the basket relentlessly because his jumper wasn’t falling early, and he got the calls and cashed in on the free throws. Boston got random contributions from guys like Rodney Rogers and Tony Delk. The biggest reason why Boston ended up winning is because they never stopped playing hard, and the Celts fans in attendance responded to that in a big way in the 4th quarter.

The Nets would go on to win the next three games of the series, so this one doesn’t hold up quite as well historically as if Boston would’ve made the Finals. Either way, it’s worth remembering and definitely worth watching. If you want to watch this game in its entirety, you can do so by clicking on this link.