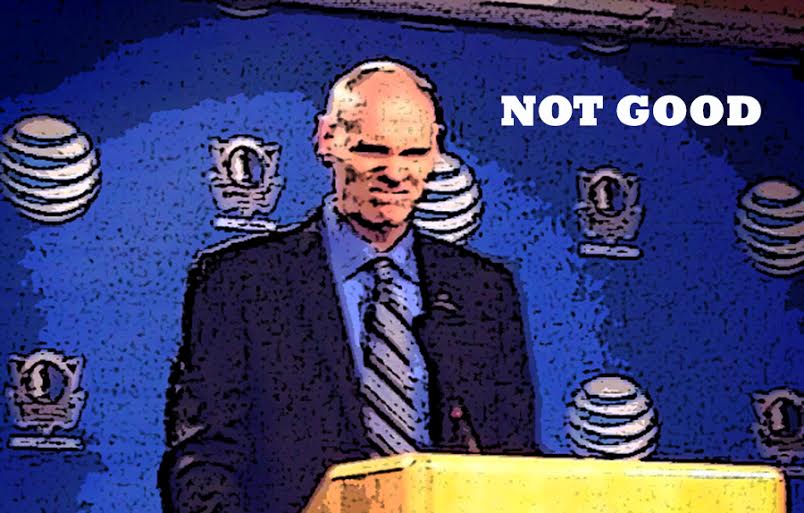 The smell of an approaching storm fills the air as lighting strikes from a lavender cloud on the horizon, and you wait for the eventual dread to consume as it inches forward. Only this storm has a particular name to it, a particular sour taste. The name?

You know—that one time they went 41-41 and finished last in the Southwest Division? That one time in 12 years they failed to make it to the playoffs? Yeah, that time. That freaking time.

Dallas dropped their third straight game in to the lap of the awaiting Memphis Grizzlies Tuesday evening at the American Airlines Center as fans could only helplessly stare at the final 109-90 score. While their loss against the Chicago Bulls last Friday night was brought on by a lack of rebounds, this empty beating was brought on by turnovers.

“It was our downfall,” Dallas coach Rick Carlisle said after the game when asked about the abundance of turnovers in the first half.

“Our inability to sustain a high level, a kind of full capacity level, is our nemesis. We got off to a great start tonight, we had great intensity in the game, and then we had a couple of turnovers late in the first quarter (which) took some of the air out of us. And then their second unit just stepped up and they played great and we struggled.”

After the powerful start by the home team, the Grizzlies managed to erase a seven-point deficit in the first quarter and ended up tying the game going into the second, 24-24. The game managed to get away from the Mavs during the following quarter. With 5:12 remaining in the first half, the Mavericks had managed to give up 11 turnovers which resulted in 13 Memphis points. Despite Dallas shooting better from the field, leading in rebounds and points in the paint, the struggling boys in blue sulked into the locker room trailing 54-44.

“This is something we’ve never dealt with before as a team,” Chandler Parsons, who put up 19 points, said in the locker room regarding the team’s three-game losing streak. “We can’t allow this to continue. We’ve got to be better and have got to stop this streak here. We’re not a team to hang our heads and let losses affect us. We’ll be alright—we’ll watch film and get better.”

It became apparent in the third quarter; Dallas clearly appeared lethargic, which isn’t a good sign since they’re playing the Houston Rockets on the road Wednesday night. By the end of the third, the Mavs surrendered 21 points off 16 turnovers and trailed 86-72 despite shooting 52.6 percent from the field.

The one question that beheld Mavs fans during this particular loss was easy to put into words: Is it time to panic?

“I wouldn’t say panic,” Tyson Chandler offered. “We definitely understand that we need to come in and fix some things – we have to make some adjustments. This is the first time we lost three games in a row this season and we’re headed into a tough road trip, so these games are very important.”

While Dallas remains optimistic that they’ll prevail against a very fatal Houston Rockets team come Wednesday night, the exhaustion factor comes into play since Carlisle made the decision to play his leading scorers for over 27 minutes each, which will most likely wear on their already fatigued bodies, the 36-year-old Dirk Nowitzki in particular, who played 29 minutes during Tuesday’s matchup.

The Mavericks need to be more physical against Houston in order to prevail and stop the skid dead in its tracks—in order to avoid watching history repeat itself (unless, of course, it’s the 2010-11 season they wish to mimic). With the All-Star break quickly approaching, Dallas needs to find a way to become the storm itself instead of finding themselves the victim, anxiously twiddling their thumbs while watching it slowly approach.