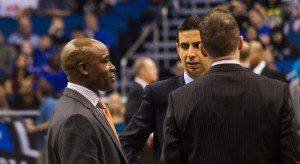 It’s been almost two weeks since the Orlando Magic won a game.

Since defeating the Houston Rockets, they’ve been in a free fall, losing nearly every game by double digits. Thursday night gave no indication that the losing will end soon, dropping yet another game, this time to the Milwaukee Bucks, 115-100.

A common theme that’s been occurring throughout the losing streak has been the slow and sluggish starts, and it was more of the same as the Magic came out flat to start the game. The Bucks, on the other hand, looked the exact opposite, as they were energetic, crisp, and executing well on both ends of the floor. In transition, the Bucks made a living, coming out of the first period with 13 fast-break points. The Bucks led 28-18 after the first.

In the second quarter, things went from bad to worse for the home team. The Magic couldn’t get anything going on offense, and their constant switching on pick-and-rolls led to one good look after another for Milwaukee. The Bucks were also able to force the Magic into 13 turnovers, scoring 18 points. The Magic would trail 59-44 heading in to halftime.

The Magic showed a glimmer of life coming out of the half, but like a scoop of ice cream in the hot sun, it didn’t last long. Orlando gave up several three-pointers to the visitors, which ballooned their deficit to 25. The fans let their frustrations be known, as the boo birds began to rain down in Amway. Looking disengaged, the Magic allowed the Bucks to push their lead even further to as much as 29. It didn’t help that the Magic turned the ball over 19 times, leading to 27 points. The Bucks led 96-71 to close out the third.

The Magic showed a little bit of life in the fourth quarter, cutting the deficit down to 15, but it was unfortunately too much for the Magic to overcome.

Jerryd Bayless led a balanced Bucks attach with 19 points. Khris Middleton and Jared Dudley both had 17 points. Brandon Knight had 16, O.J. Mayo had 13, and John Henson finished with 12 points and 11 rebounds. Giannis Antetokounmpo had 10 points on the night.

For the Magic, Victor Oladipo led the way with 21 points. Nikola Vucevic had 17 points and 14 rebounds. Willie Green had 16 points, with Elfrid Payton finishing with 15. Evan Fournier chipped 11 points of his own.