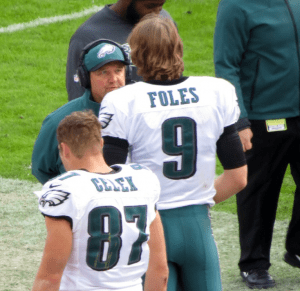 Every year my buddy Ben and I talk football when the Super Bowl is long since over. We talk about the schedule ahead, the free agent market, the draft, and all things that revolve around our teams. One thing we always kid with one another about is the amazingly ridiculous things that must be said inside the front offices of teams, in meetings between coaches, GM’s, and owners. We often take haphazard guesses at such conversations. Here is one such conversation between Chip Kelly and Jeffrey Lurie of the Philadelphia Eagles organization.

Jeffrey Lurie (JL) – Well Chip, that sure was a disappointing season we just had.

Chip Kelly (CK) – It sure was Jeff, but don’t you worry, I have a surefire plan to get us back to the playoffs next year.

JL – Ummm, Chip, your offense has already set records for the number of plays and the time taken to get a play off. You basically play a “hurry up” offense the entire game, but the calls still come in from the box. How on earth are you going to be faster?

CK – That’s simple Jeff. First; the plan is trade or release everyone on the team that weighs over 200lbs. Heavy players can’t move as quickly. Second; players are going to be put on a strictly controlled diet that will maximize their speed output. Third; I will get surgically implanted “chips” (wink) into their heads allowing each player to get all the information I give to the quarterback in a Nano-second.

JL – Chip… you’re an innovator. You’ve brought a college system to the NFL that no one thought would work, and made it work. You already monitor sleep patterns and do tons of things to ensure your players are at the peak of their athletic ability. But I somehow think that if our offensive line weighs less than I do we might have a problem blocking people. Also I’m not sure the league office or the players would look kindly on surgically implanted micro “chips” (eye roll).

CK – Well what did you have in mind?

JL – How about drafting a few players that played your system from Oregon? We could also look for players in free agency that fit the profile of smart and agile players with good endurance. Also, maybe we should think about slowing down the clock when we’re winning by a score in the fourth quarter? Having three and outs that take less than 10 seconds of game time doesn’t help our chances of winning.

CK – These are good points, and I will agree to work towards them on one condition.

JL – (muttering) I’m sure your wife is a very happy woman.