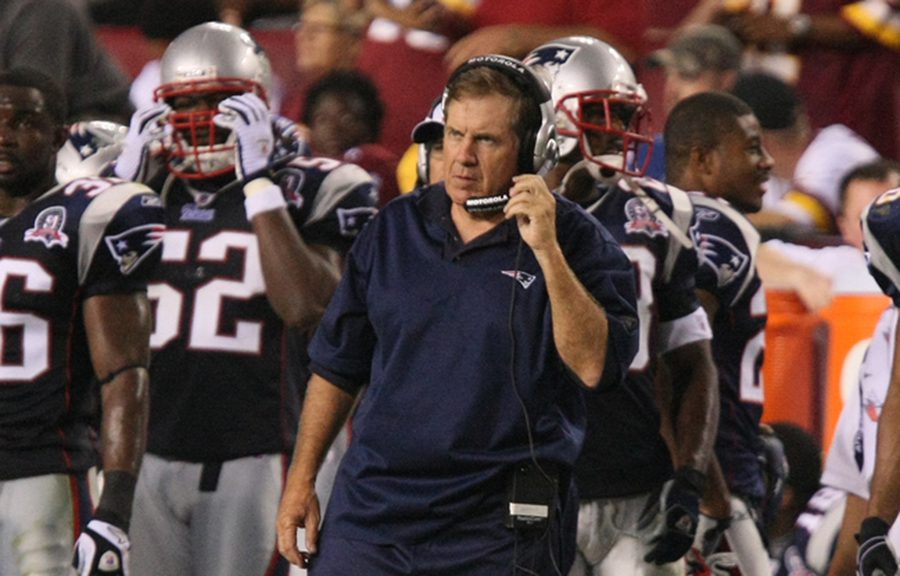 The NHL trade deadline is fast approaching, the NBA trade deadline just passed, and the MLB and NFL are both enjoying some downtime before potentially making some moves to gear up for their 2015 seasons, respectively. It is the responsibility of a general manager to make the trades that allow their coach and team to succeed, but I wonder why there aren’t more trades involving management?

The Tampa Bay Buccaneers gave up two first-round draft picks to acquire John Gruden, and the year he came on board he won them a Super Bowl. Granted, the success was short lived, as was Gruden’s tenure with the Bucs, but still, it shows what an amazing difference that management can make on a team. Here are a couple of trades I would like to see made involving team staff, rather than players.

Bill Belichick to the Oakland Raiders for Jack Del Rio and a first-round pick
The scandals in New England are beginning to get distracting, and the history of dishonesty and cheating isn’t what Robert Kraft wants his team to be about, but that is exactly what the Raiders are all about. Jack Del Rio is an OK coach, but the fourth overall pick might be enough to make the moving of coaches worthwhile for the New England Patriots.

Rob Ryan to the Buffalo Bills for a plate of hot wings
Ryan has been nothing but disappointing since he left the Cleveland Browns. His time with the Dallas Cowboys was mediocre at best, and his New Orleans Saints has been worse. How he got another job or an extension is so far beyond me I can’t see the reason with the Hubble telescope. His twin brother, Rex Ryan, has taken a new job as the head coach in Buffalo and I think having the two of them together just makes sense. A nice plate of wings from the world famous Anchor Bar might be payment enough for taking Rob off the books in New Orleans.

Paul Molitor to the Toronto Blue Jays for John Gibbons, a first-round draft pick and Toronto Maple Leafs tickets
Molitor went into the Hall of Fame as a Milwaukee Brewer, but were it not for back-to-back World Series wins with the Toronto Blue Jays and a World Series MVP, I’m not convinced he gets in. Gibbons seems not to care so much what is going on during a game, and for the Brewers that might be the perfect attitude. The Leafs tickets are there to sweeten the deal just a bit more than the first round pick already does.

Joe Maddon to the Baltimore Orioles for Buck Showalter
Maddon knows the American League really well after coaching the Tampa Bay Rays for as long as he did. His strength was getting the most out of his players, but he had some good ones. Buck has seemed to get okay players to play great, and the Chicago Cubs need that more than ever. A swap would give both teams a coach that fits better with what their team needs at this exact moment in time.

Steve Kerr to the Chicago Bulls for Tom Thibodeau and a whole lot of thanks
Thibodeau has done a great job with the Bulls, but the team is going to need some retooling and Derrick Rose might be the piece you need to trade to make it happen. Given the history, I don’t see Tom making that move, but Kerr would. Kerr was also a part of the Michael Jordan years in Chicago, so I’m pretty sure fans would be happy to see him back.

Erik Spoelstra to the Cleveland Cavaliers for David Blatt and a first-round pick
Unless you’re insane, you know the Miami Heat aren’t going to do much in the first round of the NBA Playoffs. Spoelstra can coach and win, and has a relationship with LeBron James. Blatt is competent and can work with the team in Miami to build for the future, and the future looks brighter with another first round pick.

Mike Babcock to the Florida Panthers for a first-round pick
The Detroit Red Wings are likely not going to be able to re-sign Babcock after this season, so why not trade him to a contender trying to get over the hump? There is some skill in Florida, and with the right coach, the Panthers might be able to edge out the Boston Bruins for a playoff spot. I’m sure the Red Wings have no interest in getting Gerard Gallant back in the deal.

Claude Julien to the Toronto Maple Leafs for two first-round picks
There is speculation that if the Bruins miss the playoffs, Julien will be fired regardless. The Leafs are so desperate for a coach that they wouldn’t mind giving up two first round picks to get a guy with the caliber of Julien, and with all the players they are looking at trading, the Leafs may end up with several first round picks this year. They already have two in the bag.