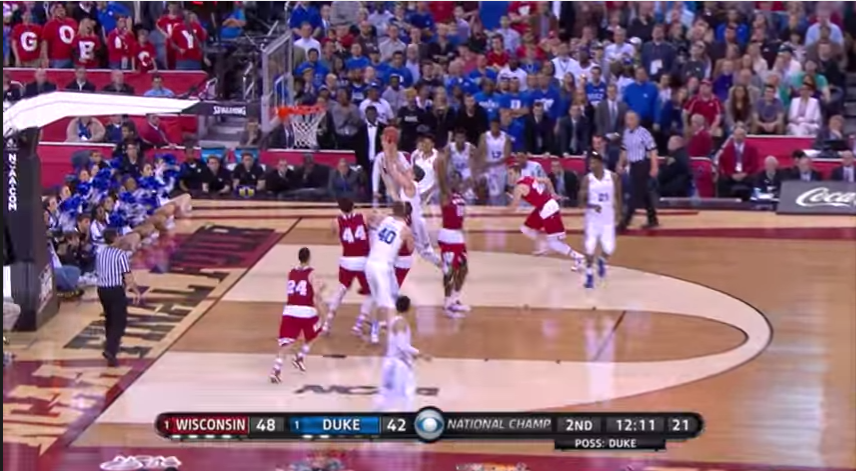 The dominant factor in this year’s National Championship game was the stellar guard play of Duke Blue Devils’ freshman  guards, Tyus Jones and Grayson Allen. Although, throughout the year most of the acclaim was credited to potential No. 1 overall pick Jahlil Okafor, but it was the overwhelming offensive onslaught of the young guards that led to Coach K cutting down the nets.

In a championship game quality possessions are placed at a premium and no position has more influence on quality possessions than the players dominating the ball. On the defensive end, guard play can have the potential to completely disrupt an opposing teams offense and cause such chaos that their entire game plan is stifled.

There has been much talk recently about the quality of officiating in the college game; however, this at times mediocre officiating tends to disproportionately affect big man. The same referees that caused Jahlil Okafor to sit the majority of the game with foul trouble, are the same ones that allowed Jones and Allen to get to the line, where they shot a combined for 12-for-12 from the charity stripe.

Tough games amongst quality competition are often decided by taking care of the ball and getting quality shots on a regular basis. That is the key to success at every level at basketball and every team needs to carry these qualities in order to have sustained success. For proof, one only needs to look back to last year and reminisce how the San Antonio Spurs dismantled the LeBron James-led Miami Heat. In the last five years it has never been more clear that without quality guard play, you cannot reach the summit of college or professional basketball lore.

Let us not forget the heroic performance of 2011 when we watched Kemba Walker struggle to score the ball, but still led the charge as the maestro behind the well-oiled machine that was the UCONN offense. He only managed to hit five shots from the field, but along with Jeremy Lamb he created an offensive attack that allowed ten different players to score from the field. Guards are the constant catalyst of the offense, so when it is clicking they should be awarded the credit for creating that type momentum.

In 2012, was stacked with great frontcourt players like Michael Kidd Gilchrist and Anthony Davis,  it was Doron Lamb and Marquis Teague that managed to lead Kentucky Wildcats to a victory. Kentucky’s bigs should be given credit for controlling the boards and blocking 11 shots that led to extra possessions, the bulk of the win stemmed from Lamb providing 60 percent shooting from beyond the Arc.

In 2013 Luke Hancock and Peyton Siva used more excellent shooting to lead Louisville Cardinals back from a deficit and beat another great guard in Trey Burke. Hellacious perimeter defense from Siva, and six-for-six shooting from Hancock proved to be too much for the Michigan Wolverines to handle.

No defensive effort may have ever stand out more than when Shabazz Napier and Ryan Boatright suffocated the Kentucky Wildcats with constant half and full-court pressure. This stifled the Kentucky offense for the entire game and kept them from ever even being able to take the lead as UCONN won its second championship in a row. Also, a smooth 22-points on the other end from Shabazz didn’t hurt their either.