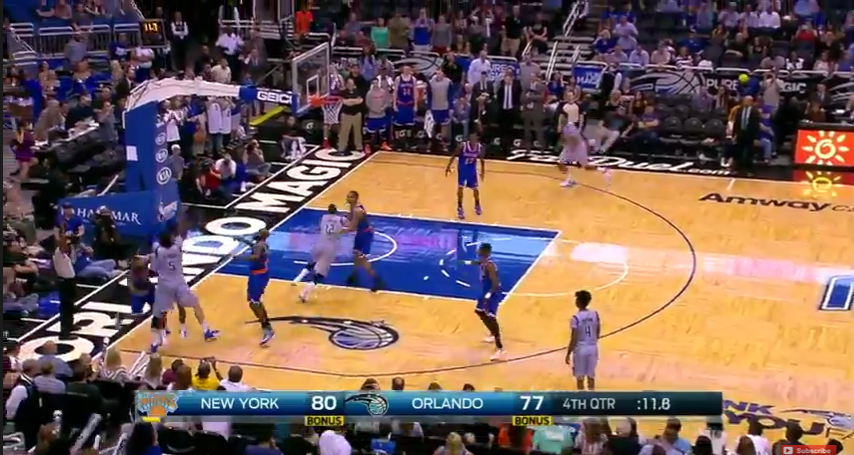 Fresh off taking the playoff-bound Toronto Raptors down to the wire before losing Friday night, the Orlando Magic returned to Amway Center one last time to face the lowly New York Knicks. After making the wrong kind of history, the Magic and Knicks went tooth and nail in the fourth, with the Knicks pulling out a narrow victory.

The signs at the beginning of the game were very telling of the kind of night the home team would have to endure. Offensively, Orlando simply couldn’t get into a rhythm, connecting on .375 percent ( 9-of-24) shooting in the opening period. Defensively, the Magic couldn’t find an answer to stop Knicks’ big man Cole Aldrich, who would score 14 of New York’s 30 first-quarter points. Orlando would fall down by as many as 10 before getting back within six heading into the second quarter. Magic trail 24-30.

Then the second quarter happened. The Magic and the Knicks would band together to set new NBA low. With the Knicks narrowly outscoring the Magic 8-7 in the second quarter — yes, the two teams combined for 15 points total –both teams set an NBA record of the fewest points scored ever. Both teams shot a combined 6-of-39 in the second, along with the Magic committing seven turnovers. Orlando’s seven points tied a franchise low with the 1996 team accomplishing that feat against the Detroit Pistons. The home team would trail 38-31 at the end of the first half.

After failing to crack double digits scored in the second, both teams came out looking somewhat like actual NBA teams. However, things continued to go south for the Magic. The Knicks out hustled the hosts and were able to get easy looks at the basket while the Magic were trying to switch from brain-neutral. Orlando would trail 61-50 at the end of the third.

With the help of Willie Green, the Magic would go on a furious comeback and eventually take the lead with just under five minutes left in the game. Both teams would trade leads before Aldrich tied the game at 73. The Magic would go up again before the Knicks tied the game. A possession later, Tim Hardaway Jr. drew a foul on Nikola Vucevic and would give the Knicks another two point lead following the free throws. Victor Oladipo would tie the game again at 77 before Hardaway Jr. knocked down the go-to three ball with just 12.6 left. Oladipo would miss the game-tying three and Orlando would settle for two, conceding the game to the Knicks.

In their last home game,  Victor Oladipo led the team with a game-high of 21 points. Tobias Harris followed that up with 15 points, while Nik Vucevic notched his 44th double-double on the season with 12 points and 13 rebounds  Willie Green finished with 11 points off the bench.