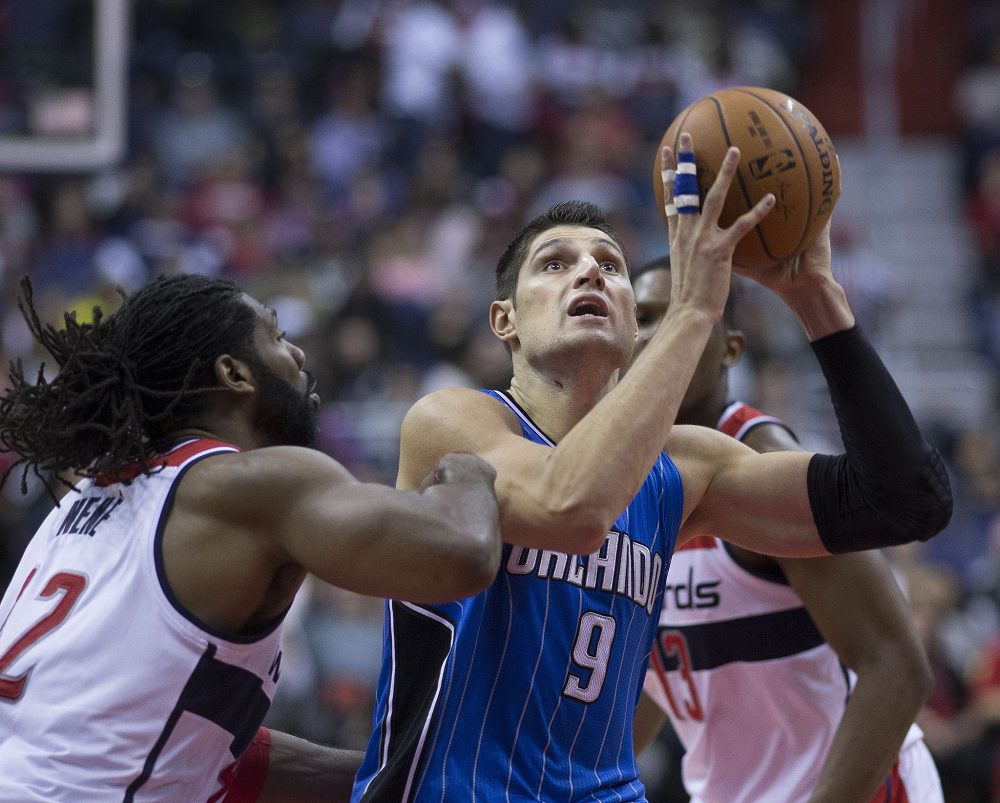 Normally I would have a witty intro explaining either why I chose to compose this column or what it’s significance is. I’ll level with you guys; there is absolutely no significance to this column and the reason I chose to compose it is because last week as I was wiping the sleep boogers out of my eyes on my way to work I began to ponder who the most best Nik, Nick, Nic or Knick in the NBA currently was. So here I am, leading off a week where I’ll be posting five columns in five days leading up to the NBA Playoffs, kicking it all off with the top ten Nik, Nick, Nic, and Knicks in the NBA. The bar has been set so low that I can only go up from here.

10: New York Knicks
I’ll be honest; I couldn’t be happier that Spike Lee had to sit through this crappy Knickerbockers season. I just don’t like him, even when he’s hanging out with Samuel L. Jackson and Barles Charkley. If this were a list of the most unwatchable teams this season, the Knicks would still be at the very bottom of the list, and Carmelo Anthony‘s presence during the first half of the season didn’t make a difference. I didn’t care to watch an unhappy, injured, past his prime star jack up a ton of shots in meaningless games … and if I did I would’ve waited until 10:30 pm East Coast time and watch Kobe Bryant do so for the Lakers. Anyway, I was going to use this section as a sort of semi-detailed sub-rankings of just the best “Knicks” of the season, but then I realized that somebody named Langston Galloway was going to come in first and I decided to scrap that idea. Anyway, the top five in some order are Galloway, Tim Hardaway Jr., Alexey Shved and I’m all out of guys. Great job, Phil.

9: Nick Johnson
There isn’t too much to say about Nick Johnson’s 2014-15 season. He’s played in almost as many D-League games as NBA games, but he does have two notable highlights this season. First, a game-winning lay-up against Minnesota back in December:

Second, a tip-dunk against the Kings where he almost momentarily rested his nards on the back of Ramon Sessions‘ head:

8: Nik Stauskas
Stauskas hasn’t had a particularly strong rookie season and his status for next year’s Nik, Nick, Nic and Knick Power Rankings is up in the air. By April 2016 he’ll probably have already legally changed his name to Sauce Castillo.

7: Nick Collison
So let’s get this straight: Collison has carved out a nice career himself as an energy guy off the bench for the Seattle SuperSonics and Oklahoma City Thunder. He hasn’t been considered a “star” since the conclusion of the 2003 National Championship Game and he hasn’t averaged double digit points or rebounds in a season at any point during his NBA career. He’s 34-years-old and he plays about 16 minutes per game. And in February he got a two-year contract extension worth roughly $8 million. To boot, he has a great head of hair and courtside seats for every awesome Russell Westbrook performance this season. There is one word to describe Nick Collison’s 2014-15 season.

6: Nick Calathes
Calathes has found a comfortable niche as the Grizzlies backup combo guard. He’s a Tony Allen type stopper defensively and that could be why The Grindfather tried to knuckle up with Calathes during a Griz practice in early March. Either way, Calathes is in a contract year and his per 36 minute numbers are pretty encouraging. Given a little more playing time he could be a bench contributor for a number of contenders next season. Bonus points are awarded to Calathes for succeeding at a moderately high level in the NBA despite looking like a English professor.

5: Nikola Pekovic
Bonus points are awarded to Pekovic for succeeding at a moderately high level in the NBA while looking the most like a James Bond villain. Frankly, I’m sort of scared to drop Pek any lower than five on this list. This is one bad ass Montenegrin and you can’t talk me out of putting him in the top five, even if he’s only played in 31 games this season.

4: Nic Batum
I have hope for Batum even though his 2014-15 campaign has been as shaky as his approval rating in Spain. Batum’s numbers were down almost entirely across the board (the biggies took a hit; points, rebounds, assists, field goal percentage and three-point percentage all dropped pretty drastically) but the second season can save Batum. The Frenchman’s numbers improved during the postseason last year and Rip City is going to need that sort of effort to once again advance past the first round, especially without Three-and-D specialist Wes Matthews around for the postseason.

3: Nick Young
Truth time: the first draft of this column was finished without including Nick Young, because who the hell doesn’t refer to the Lakers wing as Swaggy P? I totally forgot that Nick Young was this individual’s given name at birth. You’re probably asking yourself why Swaggy P, who had his down year cut short because of a fractured knee, isn’t getting points deducted due to the Sauce Castillo Corollary? It’s because he’s dating Donnie from The Wild Thornberry’s. I mean, Iggy Azalea.

2: Nikola Vucevic
Four Vucevic points that go into his ranking:

A: Whether you pronounce his last name with the first “c” making a “ch” or an “s” sound, the name Nik Vucevic is among the most fun in the league to say out loud. Personally, I’m a “ch” guy, but I won’t cramp your style if you prefer the soft c.

B: Outside of Boogie Cousins, Vucevic is the most statistically impressive center in the NBA. And yes, that is as surprising as it sounds.

C: If you’re a believer in the Orlando Magic rebuilding project, then you know that Vucevic sticking around is vital. The three guys Orlando needs to keep going forward are Vucevic, Victor Oladipo and Elfrid Payton, and yes, it does break my heart to leave Tobias Harris out of that mix but there is a certain Duke Freshman who could fill that small forward void quite nicely if the balls bounce the right way for the Magic this May. Vucevic needs to remain in Orlando though. He’s the only player that the Magic acquired in the Dwight Howard trade that is still on the roster now and if he’s still there at the start of next season the trade will feel more and more like a win for Orlando.

D: Even though Vucevic had an All-Star caliber season he hasn’t played a truly meaningful minute in two months. That’s not the case for our number one Nik, Nick, Nic or Knick.

1: Nikola Mirotic
Since March 1st the Bulls rookie power forward is a 19-point, eight-rebound guy and he’s carrying the Bulls offense every fourth quarter. That’s not a matter of opinion; it’s a fact. Mirotic is the top fourth-quarter scorer in the entire league and while I’m skeptical that a rookie Montenegrin can really be the crunch-time scorer on a title team, it’s better than some of the alternatives that the Bulls have had in years past. Andrew Wiggins is probably still the Rookie of the Year, but Mirotic’s month of March has made it interesting. At least he’ll be going home with some hardware for his individual efforts this year.