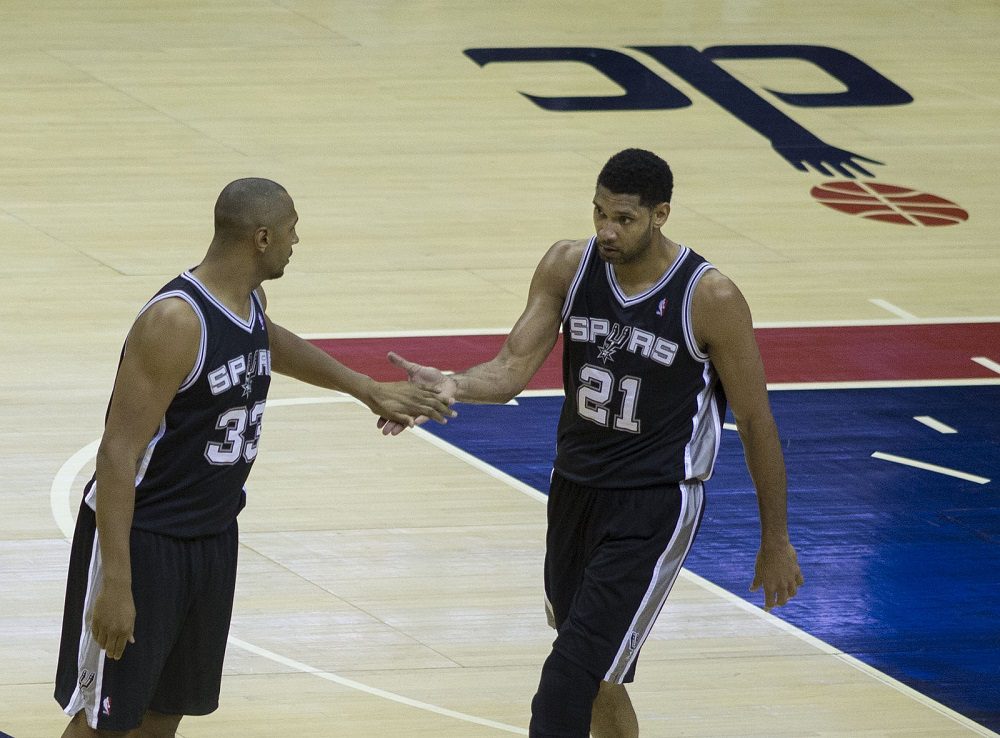 Hey wrestling fans, remember back in the day how every Hulk Hogan match was the same? Hogan would march down the aisle to one of the all-time great entrance themes, clear his opponent from the ring and then tear his shirt to the delight of the crowd. The match would formally get underway and at some point, some sort of villainous act would give his opponent the upperhand. To young, new or totally oblivious fans Hogan would appear to be on the verge of defeat. Only he wasn’t.

That little sequence that begins at about the 3:25 mark where Hogan excitedly kicks out of a pinfall, shakes uncontrollably as he’s taking punches, wags his finger in Mutombo-esque fashion, sends his opponent into the ropes, delivers a big boot and then hits his opponent with his patented Leg Drop is better known as “Hulking Up,” and it’s how just about every Hulk Hogan match ended for at least a decade.

It hasn’t been quite a decade, but the San Antonio Spurs have been sucking us in with the NBA version of this routine for five or six years. For the better part of half of a decade, we’ve spent the majority of each regular season wondering, “Is this the year the Spurs can’t do it anymore?” The Spurs have hit their bumps in the road throughout this time frame (most notably their 1st Round defeat at the hands of the eighth seeded upstart, and now consistent west contender, Memphis Grizzlies), but this comparison is loosely based on a retired professional wrestler’s often-duplicated in-ring routine, so it’s not going to be an exact science. More often than not though, any Spurs-related narratives turn out to be nothing more than hasty expectations and wasted words on a team that is annualy referred to as too old or collectively past their prime. Usually at the height of those sorts of claims is when the Spurs will usually stage a basketball version of “Hulking Up.” Take a look at their recent track record:

2009-10: The Spurs finish the regular season with a 50-32 record and enter the Playoffs as a 7-seed, their worst finish in the Duncan/Popovich era. Naturally, the Spurs upset the Dallas Mavericks in Round One, but lose to Phoenix in Round Two.

2010-11: The worst regular season of the Duncan era leads to doubts of how much the Spurs have left heading into the 2010-11 season. San Antonio starts the season 46-9, momentarily quieting the critics. However, they are upset in Round One by the Grizzlies.

2011-12: Many assume the Spurs run at the top of the Western Conference is finally over. San Antonio stumbles out of the gate to a 12-9 start, but proceed go 38-7 the rest of the strike-shortened season. They win 21 of their last 23 regular season games and their first ten in the Playoffs. They blow a 2-0 lead to the Oklahoma City Thunder in the Conference Finals.

2012-13: Once again, the Spurs’ dynasty is assumed to be toppled after blowing a 2-0 lead in the Playoffs the prior year. San Antonio enters the postseason as a 2-seed and win eight of their first ten postseason games on their way to the NBA Finals. In the Finals, the Spurs suffer one of the most devastating losses in NBA history in Game 6, and proceed to lose in Miami in Game 7.

(Are you noticing a pattern?)

2013-14: The Spurs come into the season and it’s almost inconceivable to think that after losing in such devastating fashion in the Finals that they could get there again. San Antonio responds by winning 24 of their last 29 regular season games (including a 19-game win streak) and claim the 1-seed in the West. In a rematch of the previous season’s Finals, the Spurs defeat the Miami Heat in five games to win the fifth title in the Duncan/Popovich era. Evidently, they never stopped saying their prayers and eating their vitamins.

And then there is this season.

The Spurs spent the majority of the year on the edge of remaining in the Western Conference Playoff picture and panic set in early. How much do the Spurs have left? Is this just a championship hangover or is their finally time up? They won the title last year, what do they really have to play for this year? Are Tim Duncan, Tony Parker and Manu Ginobili just too old? You know, all of the same, recycled storylines we’ve heard over the past five years.

As per ushe, the Spurs stormed back and are heading into the postseason as one of the favorites to win yet another NBA Title. They’ve won 11 games in a row and 21 of their last 24. As was the case with Hogan too, it’s the same old shit, different year.

In the early days of the Duncan/Popovich partnership the Spurs were, for lack of a more creative term, boring. Look, I don’t know what else to tell you. It’s not a reflection of Duncan’s all-around talent or Pop’s brilliance on the bench … the NBA as a whole just wasn’t as fun then as it is now, and neither were the Spurs. Over the years, the Spurs have not only embraced a changing basketball landscape; they’ve set the bar for how effective AND how fun the pace-and-space era can be. And now it’s the tastiest recipe for success out there. The team with the best record in the league is coached by a former Spurs player who mentioned Popovich as an influence in his coaching style. The team with the second best record in the league is coached by a former Popovich assistant. The team with the third best record in the league is the San Antonio Spurs.

It’s the same thing with Hogan’s “Hulking Up” routine. It’s been copycatted by plenty of baby faces who were created in the Hulk Hogan mold. Hogan pulled off this end of match shtick better than anyone else who has performed it over the years, but here lies the biggest difference between Hogan and the Spurs, and obviously there are plenty of them:

As the years have gone on Hogan’s “Hulking Up” routine has started getting old, mainly because the Hulkster got old. In Hogan’s early days even though it was cheesy, it was also believable that he could “Hulk Up” because of his stature, charisma and larger-than-life persona in and out of the ring. But as he got older and continued to wrestle even as his already limited in-ring skills were in decline, the “Hulking Up” routine got tired and sad. Even if we know it’s all part of (SPOILER ALERT!) the scripted show that wrestling is, it’s just difficult to believe that a sixty year old dude can take that kind of beating and then shake it all off and come back to defeat his opponent. If anything, the simple idea of “Hulking Up” is ruined now because if a twenty years past his prime Hulk Hogan can do it, anybody can do it.

In basketball it’s different. There is no script to follow and the results aren’t pre-planned (unless of course Tim Donaghy is involved). So when the Spurs tiki-taka teams to death and continue winning almost two decades after this insane run of excellence began, it’s just a testament to a brilliant coach (Popovich), unselfish stars who are making an impact far longer than we ever expected they could (Duncan, Parker and Ginobili), and a crop of young guys who are either next in line to carry the torch for the franchise (Kawhi Leonard) or better than they would be elsewhere because they have bought into the Spurs system (everybody else).

The best part about this Spurs run of excellence and their annual “Hulking Up” routine is that it will never grow tired. It will never seem phony. When they aren’t good enough to do it anymore they’ll just stop doing it. Our memory of how freaking great this team has been will never ever be tainted by watching some old, and somewhat sad version of it when we know that it shouldn’t work anymore. Instead, we’re watching an old, and improbably better version. And let me tell you something brother, that’s not at all normal. Enjoy it while it lasts.