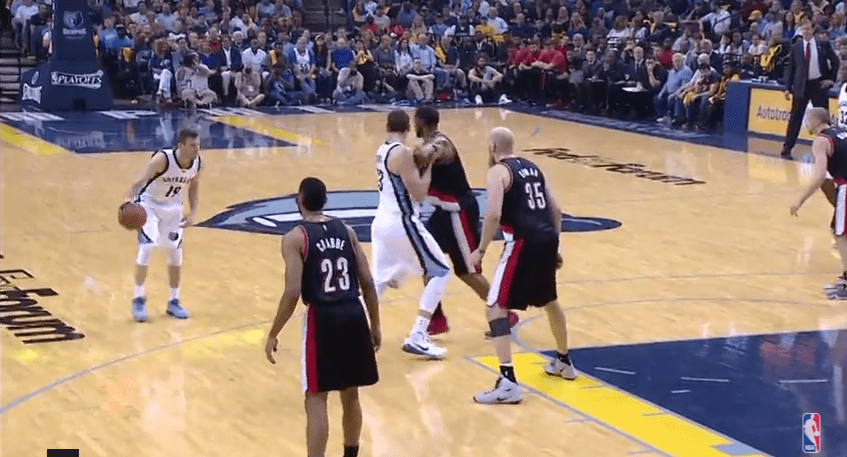 It’s tough to beat a team eight times,” Lillard said. “Eventually, I feel like we’ll come around. Houston beat up on us in the regular season (last year) … but we got the best of them in the playoffs.” – Damian Lillard speaking to The Oregonian on the Portland Trail Blazers 0-4 regular season record versus the Memphis Grizzlies

A lopsided Game-1 performances doesn’t guarantee anything for the remainder of a playoff series, but the Memphis Grizzlies definitely feel spunky after last night’s 100-86 victory.

The Portland Trail Blazers were held to 39 points in the first half, including a measly 15 points in the first quarter. LaMarcus Aldridge and Damian Lillard struggled in the first two quarters with 9-of-29 combined shooting from the field, and were unable to make a significant contribution on the defensive side of the ball. The All-Star duo combined to shoot 18-of-55; the rest of the team only had 40 shot attempts combined.

For the Grizzlies this was their first dominant win in over a month. Beno Udrih scored a playoff career-high 20 points off the bench, which began with him hitting his first six shots in the first quarter. Udrih’s unexpected scoring provided the Grizzlies with a cushion for a lead they never relinquished the entire game. Four players scored 15 or more points for the Grizzlies, and they had no trouble keeping the Trail Blazers from scoring. The game can basically be summed up with this mascot on mascot violence that actually happened during a TV break.

There is no way to quantify physical superiority, but the Grizzlies have it in spades at every position. The Trail Blazers would have a better chance to fight back if a litany of injuries did not occur all at once. The Blazers three best shooting guards are out or fighting through injuries. Alonzo Gee has a right foot issue. Nicolas Batum is playing hurt (bruised right knee). LaMarcus Aldridge is enduring through a left thumb injury. Things are pretty grim for the Blazers right now.

How can the Blazers fight back?

The Blazers are not going to win battles of brute force against the Grizzlies, as very few teams are capable of that feat even with a roster at full strenght. Two numbers really stick out when reviewing the box score: rebounds and fast break points. The Blazers out rebounded the Grizzlies 56-48, but only had six fast break points. The Blazers are in the bottom-third of the league for fast break points per game in the regular season. The playoffs require adjustments and this is a necessary change. Elite defenses do not fold on the strength of halfcourt sets alone (see the San Antonio Spurs last night). The Blazers won’t have a chance to win this series if they don’t create easy opportunities.

Game 2 starts Wednesday at 8:00 PM Eastern Time and will be broadcast on TNT.