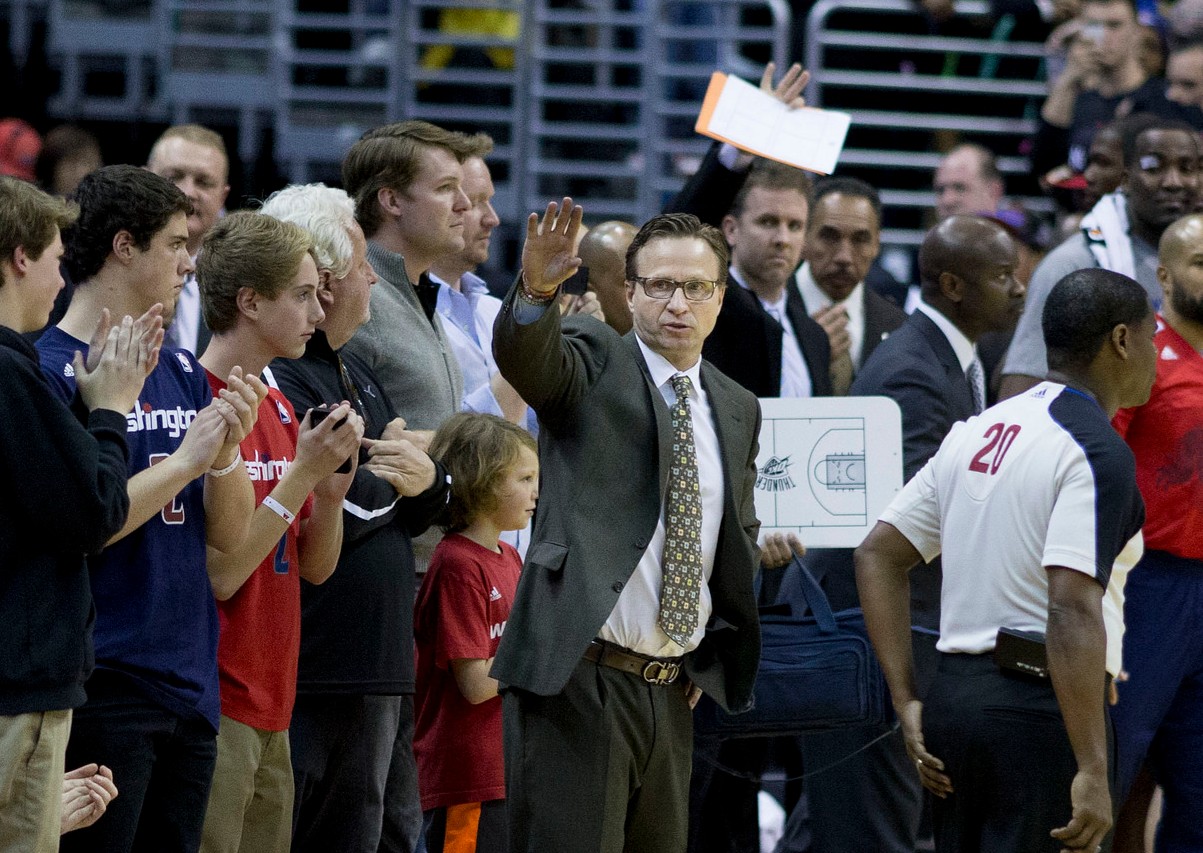 This was all so predictable. I basically wrote the opening paragraph for this column six months ago for Baller Mind Frame’s 2014 NBA Season Preview.

The 2014 offseason was the time for the Thunder’s front office to make a significant move. Durant’s contract runs out at the end of the 2015-16 season. Any big changes made after the 2014-15 season will only have one year to work, or Durant is leaving for greener pastures. For example, if a coaching change was going to be made, it had to be in the 2014 offseason. If the Thunder do not make the Finals this year, the front office might seriously consider firing Scott Brooks only it would be too late. Hiring a new coach for 2015-16, the last year of Durant’s contract, is a much riskier proposition because the new coach would have one year to push the Thunder to the next level.

As we all know, this past year we had unique and challenging circumstances and as I have conveyed, not many people could have accomplished what Scott and this team were able to. Therefore, it is very important to state that this decision is not a reflection of this past season, but rather an assessment of what we feel is necessary at this point in time in order to continually evolve, progress and sustain. We determined that, in order to stimulate progress and put ourselves in the best position next season and as we looked to the future, a transition of this kind was necessary for the program.

That’s a whole lot of words to say nothing at all. The Thunder (45-37) missed the playoffs this year with the same record as the number eight seed in the West thanks to a miracle shot by soon-to-be MVP Anthony Davis.

That’s the difference in us discussing a tightly contested first-round series versus the Golden State Warriors, and Scott Brooks being fired a few days after the regular season ended. Yes, it is stupid.

The Western Conference is not the Eastern Conference. Missing the playoffs when reigning MVP Kevin Durant missed 55 games, current MVP candidate Russell Westbrook missed 15 games, and defensive stalwart Serge Ibaka missed 18 games is nothing to be ashamed of. In fact, any Western Conference playoff exit prior to the Finals is nothing to sneeze at. The Thunder were in serious danger of not making it out of the first round last year against the Memphis Grizzlies without Reggie Jackson losing his mind in the fourth quarter of Game 4, and a perplexing suspension of Zach Randolph for Game 7 for this light physical retaliation (Ibaka punched Los Angeles Clippers forward Blake Griffin in the balls ten days later and got no punishment… anyway).

Every seed in the Western Conference is a minefield. The 2,3, 5, and 6 seeds are only separated by one game in the Western Conference, and each team is a legitimate contender for the title. The strongest contender to the Miami Heat in their four straight trips to the Finals was the Indiana Pacers – let that sink in for a moment. Although Brooks’ firing is problematic considering the strenuous circumstances of injuries and Western Conference superiority, the consequences of doing it now are what make this situation untenable.

Durant will be entering his eighth season in the league, Westbrook his seventh. They are no longer a young duo. They are grizzled vets who have suffered season-ending injuries, and would love to reach the top of the mountain as soon as yesterday.  The Thunder have proven to be notoriously cheap simply for the sake of maintaining their initial plans for the organization in place.

In March 2011, Kendrick Perkins was signed to a 4-year, $36 million extension after being acquired via trade from the Boston Celtics. The Thunder would question that decision a year later after the Thunder reached the 2012 Finals, and James Harden sought an extension around 4-years, $60 million during the 2012 offseason. Instead of trying to figure it out during the season, or doing the simple thing by cutting Perkins, the Thunder traded Harden, this year’s likely MVP winner, to the Houston Rockets for a bag of peanuts. For the record, Perkins constantly put the Thunder at an offensive disadvantage when he was on the floor, and has 2 total minutes for the Cleveland Cavaliers in three playoffs games so far. Definitely a game-changer, just maybe not in the way intended.

Sure, Thunder fans are tired of hearing about the Harden trade, but the team is about to give the same amount of money that Harden requested to restricted free agent Enes Kanter who they just traded for. The Thunder will then have Enes Kanter, Steven Adams, Mitch McGary, Serge Ibaka, and Nick Collison sharing minutes at the 4 and 5 spots which also doesn’t include the moments Durant will play power forward. Kanter got huge numbers at the end of the season; those same numbers and opportunities won’t be there when Durant and Westbrook return.

Who wants this head coaching job? According to the Thunder, Kevin Ollie and Billy Donovan are the frontrunners! Okay, honestly that’s not exciting at all. Ollie, head coach of the Connecticut Huskies, won the 2014 National Championship and is considered a strong candidate because of the relationship he built with Durant while he was still playing in the league. Donovan won back to back national championships in 2006 and 2007 as the head coach of the Florida Gators, and is remembered in NBA circles for accepting the Orlando Magic head coaching job in June 2007 before negating the agreement a day after his introductory press conference. Worthy of note is Donovan’s close friendship with Presti who will of course forgive the transgression with the Magic from eight years ago.

So the primary candidates for the head coaching position are a close friend of Durant, and a close friend of Presti. This isn’t high school. Bringing a new coach in the last year of Durant’s contract puts an extraordinary amount of pressure on everyone in the organization. The new hire could be the difference in the Thunder fulfilling their destiny as a team for the ages, or Oklahoma City become a basketball ghost town in two years (after Westbrook’s contract ends) that no free agent will ever commit to. The stakes are immeasurably high and Presti is making decisions as if he has the same standards as the characters in Mean Girls.

This is the is the penultimate chapter to the Thunder we know and love. Enjoy it while it last.