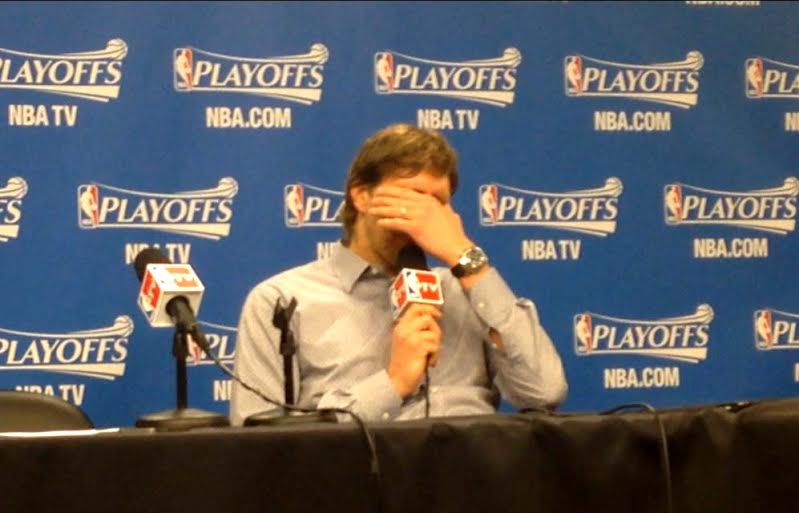 The faithlessness that seemingly flicked at the spine of Dallas Mavericks fans, after their sedated loss to the Houston Rockets in Game 2, was a mere echo during the fourth quarter of Game 3. The desperate viciousness that glistened in the eyes of the Mavericks on the court was woven strictly from the great clan of fans who had taken to their feet, passion surging through their bodies and piercing roars. The American Airlines Center was alive. Dallas was high on hope, recalcitrant against naysayers’ suggestions to roll over and die already after falling into a 0-2 hole. The normally shy Monta Ellis, who had been askew with his shooting as of late yet closed the game with a playoff career high 34-points, was standing tall on the hardwood, sweat beading down his baby face and he raised his hands to address the home crowd while Josh Smith stood firm on the free throw line…

The crowd, at their beloved shooting guard’s feet, responded with bellows and raging stings of contempt toward their rivals, doing everything within their power to distract Smith. Doing everything they could to help their team obtain a fighting chance to survive this first round. 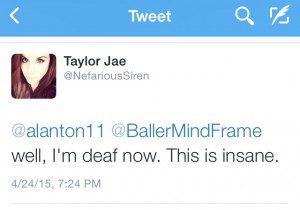 The officials, always one for controversy, had other plans.

“We’re scrambling like hell defensively and Devin Harris is going to get the ball, and Dwight Howard throws him into our bench,” Mavericks coach Rick Carlisle said of the events that followed the “missed” call while sitting bruised and beaten in front of the media after the devastating 130-128 loss. “So instead of us getting the ball and a foul on Howard, it turns into essentially a five or six point swing.”

Mavericks owner Mark Cuban was so heated over the officiating, that he briefly left the court early during the fourth, but not before giving a penetrating glare to NBA commissioner Adam Silver, who was in attendance, as he stormed away.

“Howard is throwing people all over the place,” Carlisle expressed when talking about the incident, something he’ll most likely be fined for. “And that can’t happen in Game 4.”

Despite a penetrating comeback in the final seconds of the game, the Mavericks suffered one of the most brutally heartbreaking losses in their playoff history, setting them back in the series 0-3 against their Texas rivals. Adding insult to injury, the fatal James Harden helped tie the Mavericks to the headboard by chalking on 42-points of his own.

When asked if he could take pride in a loss like this, All-Star Dirk Nowitzki brushed the hair out of his dejected face and answered honestly.

The acuity of this very game wasn’t quite as clear to viewers, or even to the players, during the start of this game though. Ellis opened up the first quarter with a solid trey, feeding hope to those who had been down on him, exciting the crowd in a way that had been absent as they cautiously watched their team on TV while they were limping through away games in Houston. Raymond Felton, who appeared in his first starting lineup since May 18th, 2013 with the New York Knicks, replaced Rajon“he-who-must-not-be-named” Rondo (ugh, that guy), eagerly took to the court and nabbed his first rebound as a Mavericks starter seconds into the game after Terrence Jones missed a jump hook shot. Despite their vigor, Dallas was down 42-36 by the end of the first.

J.J. Barea gave a much needed spark off of the Mavericks bench in the second with six points, three rebounds, and five assists at the 6:16 remaining in the half as he helped bring the Mavericks up 52-49. Ellis closed the deal before the buzzard as the home team went into the locker room leading 72-65.

However, third quarter woes twisted its ugly head and struck down the Mavericks as they flayed about. Mavs starting center Tyson Chandler, not too cautious in displaying his irritation for the nagging Rockets, started getting slightly touchy-feely with Howard, which led to the latter’s third foul of the game. Regardless, Houston would end up leading 101-99 going into the fourth.

The brutal reality of the final minutes of the final quarter brought Dallas to their knees. They fought kicking and screaming to the very moment Ellis took on the role of clutch master, grasping the ball in his eager hands on that final shot, only to dramatically miss and bring the pain of a season corrupted one step closer for the Dallas Mavericks.

The Mavs have one last chance to grasp a life-saving straw on Sunday night when they face the Rockets in Dallas.

But if they go down, it will be swinging.

“The guys are fighting their asses off,” Carlisle mused. “I love it, and we’re going to be back in here fighting our asses off on Sunday.”