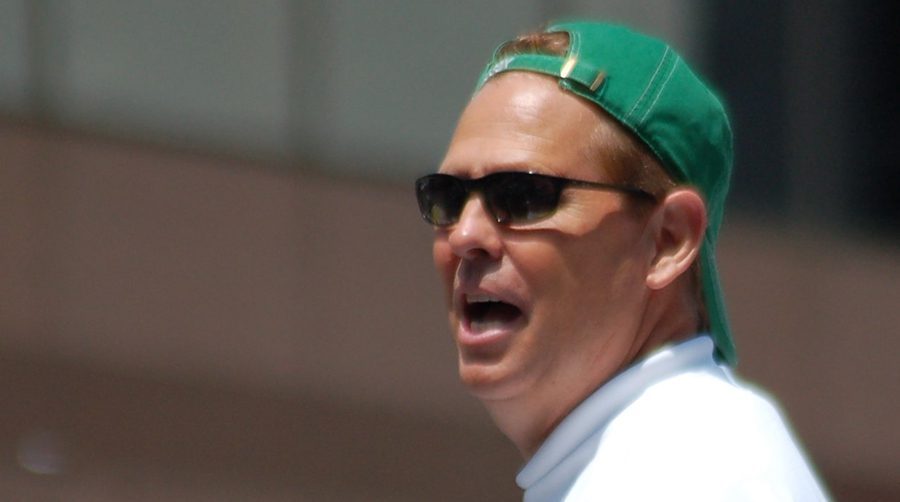 Self-referencing writers are mostly incompetent boors suffering the additional misfortune of misplaced narcissism, and yet, I must (1) reference myself in addressing my rage towards Danny Ainge.

The Boston Celtics entered the NBA Playoffs and started the 2015 tournament at the “Mistake by the Lake.” (2) Isaiah Thomas legitimately challenged for the NBA Sixth Man of the Year Award; Brad Stevens was an obvious candidate for NBA Coach of the Year (3). Boston’s run since February 2 is astounding. The Celtics, 23-12 in that time, with a .657 winning percentage is flat-out amazing considering that prior to Groundhog Day, Boston’s record was an uninspiring 17-30, and an equally uninspiring .361 percent. Vegas projected the Celtics for 27 wins.

The idea of trading the last remaining link to the glory days of 2008 (point guard, Rajon Rondo) rubbed many fans (4) the wrong way. Credit to Danny Ainge – the man has never shied away from trades despite arguments that sometimes the best trades are ones never made. Here’s a list of Boston’s roster moves this season:

Ainge’s trades relieved salary cap pressure while adding dynamism to a roster lacking the effervescence of today’s NBA. Furthermore, Jeff Green and Rajon Rondo were not Boston’s future. (5) The Celtics’ roster transformation directly correlates with the acceleration of results. Boston’s rise in the standings possibly may be explained as the Eastern Conference being bereft of good teams, but that analysis is short-sighted. The East is rightly regarded as the weaker of conferences, yet six of the eight playoff teams have winning records.

Despite the insufferable presence of the New York Knicks and Philadelphia 76ers, meaning the Celtics have the privilege of padding their win totals against the NBA’s ambassadors of awfulness, the East is full of compelling stories – the Detroit Pistons rise since the dumping of Josh Smith, the rise of Hassan Whiteside with the Miami Heat, Paul George’s return to the Indiana Pacers, and the Brooklyn Nets bumming everyone out by capturing the eighth seed.

Since Groundhog Day, the Celtics’ narrative changed and became a different story. They’ve beaten the Atlanta Hawks, Cleveland Cavaliers (twice), Pelicans, Grizzlies, Pacers (twice), Toronto Raptors (twice) and the Heat. Against teams with playoff aspirations (meaning not the Knicks, Sixers, Nuggets, Minnesota Timberwolves, Sacramento Kings, Utah Jazz, Orlando Magic, Los Angeles Lakers and Pistons), Boston’s record is 15-8; a .652 winning percentage. Sixty-four percent of Boston’s games during the post-Groundhog Day push have been against teams with playoff aspirations. Extrapolating those numbers over a full season (64% of games being against playoff aspirants), the Celtics would win 34 out of 52 games going 34-18. Against the dregs of the league, the Celtics are 9-3, a .750 winning percentage. If the Celtics maintained their winning ways over a full season they are a 53-win team.

The Celtics are not a fluke, flash in the pan team. This team is a tale of two seasons: the first part a hodgepodge of spare parts thrust into roles of prominence; the last 34 games these Celtics are a systemic organism buying into lofty goals – and achieving them. Ten days prior to the regular season’s culmination the Celtics were not considered a strong candidate for the postseason; Miami and Brooklyn were the logical choices to take the 7th and 8th spots – it was such a fait-accompli in South Florida there was open speculation as to who the Heat should face – LeBron and the Cavs or maybe nip the 6th seed and face Toronto. Boston’s rise reveals the clarity of Ainge’s plan and the speed of a rebuild under a coach uniquely equipped to put his players in winning positions. Stevens’ coaching acumen justifiably receives praise, but Ainge is the unsung hero. To Danny Ainge – let me state this unequivocally – I sincerely apologize for every negative word I wrote in December.

Certain columnists (6) were dopes and overreacted when Rondo and Green were traded. Sometimes fans have short-sighted notions on how to make a team better. Boston’s success resembles past Celtic teams – the whole team buying into a goal and making the team’s desire supreme over individual desires. Isaiah Thomas’ first playoff game comes with the Celtics. His valuable contributions speak to Ainge identifying a glaring need in his team: dynamic point creation off the bench. Initially, the worry was that Thomas would infringe upon the development of Marcus Smart rather than what has happened: Thomas’ presence caused Smart to elevate his game. Avery Bradley was required to do more than he’s capable in the past, and the Celtics now harness his talents and he’s exactly what he is: a versatile player filling many different needs on a playoff team. Jared Sullinger, Kelly Olynyk, and Tyler Zeller bring presence to the interior, and there seems to be a clear developmental goal for Olynyk whereas before his development seemed governed by the hand of divine mercy. Jae Crowder’s energy and enthusiasm are infectious (7) and Evan Turner no longer seems concerned with being the man and living up the hype of his draft pick status. (8)

The Celtics are not a finished product, but the team Ainge put together is compelling; they play hard and are coached to expect nothing less than success. He’s validated his role as impresario of the Celtics and clearly Boston’s direction lacks ambiguity. The Celtics are heading upward – fast. Though unrealistic to expect an NBA title this season in Boston, the Celtics validate the idea that tanking is deplorable and teams that play to win create the great excitement of sports: the joy of playing with house money when your team overachieves.

Consider the Celtics are down three games to love against Cleveland. (9) Fans of the guys in green never would conceive of the playoffs this season, and if asked in October if they’d mind a 3-0 series deficit, Boston fans would enthusiastically welcome the return of late-April basketball. The Celtics and Stevens stand only to gain from this experience, even if a sweep results. Through the first two games, Boston’s competitive chops are displayed; the young Celtics are being put to the sword earlier than expected yet responding like champions because they belong amongst the NBA’s top 16 teams. A sweep is not the worst result from this playoff foray – this team demonstrates their hunger for success through play and verbalization. “Happy to be here” is not in Stevens’ ethos and surely isn’t satisfactory for Ainge. Teams often claim not to rebuild, but reload, (10) yet those statements come across with the authenticity of a used car salesman’s advocacy of undercoating and rustproofing. The Celtics actually reloaded; Boston realistically needs one superstar to vault into the NBA’s elite – and though I derided Ainge’s “asset collection” in December, those assets now bear fruit.

Since December, Rondo submarined his market value and the Celtics have what seems to be infinite first round picks. Basketball increasingly views first round picks the way Major League Baseball executives view prospects: wary to deal them away because the future return might make the executive dealing the prospect/pick a rube a few years from now. The Celtics can turn their eyes towards a host of franchise players in bad situations – paging DeMarcus Cousins – and construct hard-to-pass offers. They could trade a slew of picks for Jahlil Okafor, Karl-Anthony Towns or another draft day darling. The Celtics could make incremental moves to improve and land a Kevin Durant-type superstar in the 2016 offseason NBA Free Agency bonanza. Boston enters the upcoming offseason massively positioned for success.

Perhaps, though, the Celtics should think nostalgically. A great move could be bringing Paul Pierce back to Boston for his final season, especially if the Celtics draft or trade for a franchise cornerstone. Boston fans were robbed of having Larry Bird pass the baton to Len Bias; Pierce transitioning to Franchise Player X is that type of wonderful transition Boston is famous for.

Then again, who am I to suggest any type of personnel move to Danny Ainge AKA the guy who should win NBA Executive of the Year?

1. I understand the hypocrisy of excoriating other writers then doing the same action. This author’s foolishness is well-noted, and I shall eat crow whilst simultaneously acting high and mighty about eating crow because the Celtics are in the playoffs and I’m overcome with joy.
2. Cleveland – seriously, what is good about that town? The most notable part of Cleveland’s history is pollution, which was so disturbingly intense that the Cuyahoga River caught on fire. As Gonzalo “Papi” LeBatard said (about Akron, but still), “That place is a dump.”
3. Respect to Mike Budenholzer, he’s earned the honor, but Atlanta being in the #1 seed is not as unlikely as Boston’s postseason appearance. Stevens putting the Celtics in the playoffs after their two best players were traded is flat out amazing. The Celtics finished 40-42. I never suspected Boston would sniff a playoff berth, let alone 40 wins, even in the atrocious East; credit to Red… I mean Brad Stevens.
4. Me.
5. Despite my protestations in December on behalf of Rondo. Green was unwelcome from Day 1 – his presence is the reason Kendrick Perkins was gone. Perk was a beloved part of the Big Three Celtics.
6. Me. Again.
7. Full disclosure: after reading ESPN the Magazine’s article on Rondo I grew wistful and watched my 2008 NBA Championship DVD. I forgot how James Posey and Sam Cassell kept injecting shots of excitement into the team. Crowder is a guy impossible to root against – the hair, the energy, and the ability to hit a late shot to beat good teams like the Raptors is unbelievable.
8. Jackie MacMullan wrote a great column on Turner for ESPN Boston.
9. As of this writing, 4/23/15.
10. The Lakers and the Dwight Howard/Steve Nash acquisitions might be the best example of this idea even as the team ended their season in humiliating fashion with Houston being the site of the latest Dwightmare.