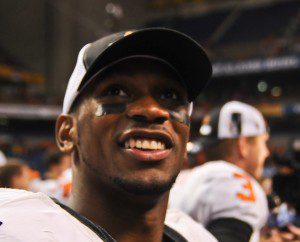 The case can still be referred to the city prosecutor’s office for potential misdemeanor charges. A former girlfriend of Randle’s told police that he brandished a gun and broke a car window during an scuffle with her. The girlfriend also alleged that Randle pointed the gun at a vehicle while their son and his friend were seated inside.

The Cowboys P.R. spokesman has said the team has no comment at this time. The Cowboys Greg Hardy was recently suspended for 10 games after being found guilty in a domestic violence case, which was later dropped when the only witness went missing during the jury trial.

No word yet on possible league discipline surrounding this incident.