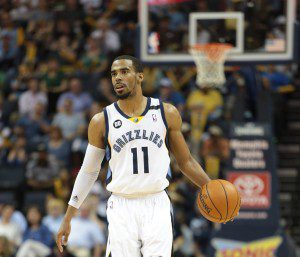 The Memphis Grizzlies played an ugly, slow contest against the Golden State Warriors in Game 2 of the Western Conference semifinals. Fittingly enough, that’s exactly how Memphis likes it, and this slugfest ended with the Grizzlies winning by a 97-90 score. This margin notched the series at 1-1 prior to heading to Memphis for a Saturday showdown. Without doubt, the Grizzlies’ Game 2 victory mostly came because of Mike Conley‘s return. The Ohio State product displayed heart and tenacity during a clutch performance.

Even Memphis fans weren’t sure what Conley would bring. He suffered a grotesque facial injury against the Portland Trail Blazers, one that sidelined him for multiple days and kept him out of Game 1. A return with managed minutes and limited effectiveness would be reasonable. Instead, Conley went 8-12 from the field, finished with 22 points, and only committed a single turnover. Not bad for a guy with a goofy mask and a horribly distorted left eye. Conley’s heart simply propelled the Grizzlies to earn this split.

From the Warriors’ perspective, it’s actually surprising they only lost by seven given such a lackluster showing. On the night he received his MVP Award, Stephen Curry had a painful shooting display: 2-11 on threes, 7-19 overall. Klay Thompson wasn’t much better as he went 6-15 overall, 1-6 on threes. Draymond Green was 3-11, and Golden State went 6-26 from beyond the arc. The amount of clanked shots was appalling, clear proof that teams live and die by the three. The quiet, unexpected performer was Leandro Barbosa who scored 14 points in 14 minutes.

Beyond Conley, the Grizzlies also benefited from its reliable interior forces, Zach Randolph and Marc Gasol. Randolph had 20 points and seven rebounds as Gasol totaled 15 points. Courtney Lee wasn’t efficient, but his 15 points and overall energy provided Conley with a capable running mate. This game also can’t be discussed without praising the intensity of Tony Allen. The defensive specialist locked up Thompson and poured in nine points, four steals of his own. Allen wasn’t afraid to sprawl on the floor or push the tempo when needed. Memphis doesn’t snatch away Game 2 without Allen.

Moving forward, each team has a full three days off prior to Saturday’s matchup. It will be intriguing to see how Golden State responds to getting slugged in the mouth. The Warriors were the best road team in the NBA during the regular season, meaning even “The Grindhouse,” an appropriate nickname for the FedExForum where Memphis plays, won’t scare them. But a similar shooting display in Game 2 would surely doom Golden State in Game 3. Here’s to betting Curry and Thompson don’t shoot that poorly again. Regardless, we definitely have ourselves a series. That was made official the second Conley laced his shoes up for Game 2.