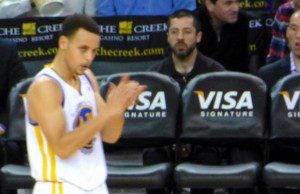 The Golden State Warriors have only been tested on extremely rare occasions this season. Following a 2-1 series deficit to the Memphis Grizzlies, the Bay Area squad faced a prototypical “back against the wall” situation for the first time. In resounding fashion, the Warriors responded. They were primarily aided by the efforts of Stephen Curry, the MVP who went 11-22 from the field to total 33 points. Despite 21 team turnovers, Golden State managed to win because of 14-33 three-point shooting.

Effectiveness from deep was the biggest key to the Warriors’ success. On threes specifically, Curry was 4-9, Klay Thompson was 3-6, Draymond Green was 3-8, and Andre Iguodala was 3-5. That’s a wide range of productive shooters. Beyond lighting it up from deep, Golden State had tremendous defensive activity. Marc Gasol and Zach Randolph were regularly double teamed. This left Tony Allen wide open to clank jumpers in predictable fashion. Mike Conley also struggled with his opportunities against Golden State’s tenacity, going just 4-for-15 from the field.

The work done on Gasol and Randolph benefited the Warriors throughout the game. After each big man owned the paint in Game 3, this contest told a different story. Andrew Bogut bounced back with a far improved performance as he blocked three shots and grabbed nine rebounds in 30 minutes of time. Along with Green, Harrison Barnes, and David Lee, Bogut took turns on the two Memphis big boys, largely holding them in check. Randolph had four turnovers, and Gasol never looked comfortable during his 7-for-19 shooting display. The Grizzlies also received little help from Allen or Courtney Lee.

When a clutch performance is needed, when a team is against the ropes, certain individuals have to step up. That clearly applied to Curry, the immensely popular player with MVP hardware, following two straight uncharacteristic performances. In Game 4, the Davidson product hit step-back triples with regularity. His mid-range shot was sharp. He was able to get in the lane and finish near the rim. These aspects escaped Curry and Golden State in Games 2 and 3. Game 4 was different, and now the best team in the NBA is essentially in a three-game series with two potential games in Oakland.

For Memphis, overreacting would be a fatal misstep. They excelled to win back-to-back games, and no one realistically expected the Warriors to drop three consecutively. Perhaps a Game 5 adjustment will be featuring a smaller lineup in spurts. Memphis did decent work with Vince Carter, Jeff Green, and other bench players in the lineup. On the Warriors’ end, another sharp shooting showing will be necessary. The Oracle Arena crowd explodes when Curry or Thompson drill a triple. Shooting and continued activity on defense should put them in a quality position.