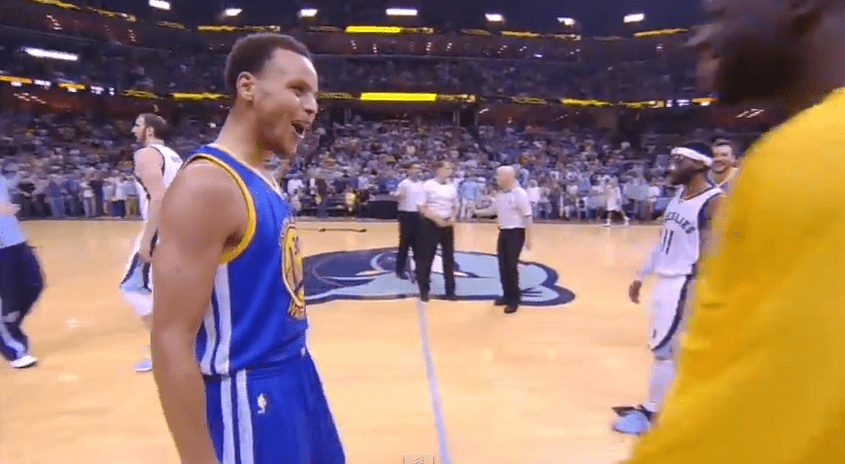 The Golden State Warriors have advanced to the Western Conference finals for the first time since 1976. After defeating the Memphis Grizzlies by a 108-95 final on the road, Golden State now waits for the Game 7 winner in the Houston Rockets/Los Angeles Clippers series. Stephen Curry‘s 32 points were the biggest difference in this contest. He and Klay Thompson combined for 11-18 three-point shooting, and the Warriors went 15-32 on triples as a team.

Memphis battled back into the game after suffering a miserable start. A double-digit lead came for the Warriors quickly in the first quarter, and the Grizzlies lack of firepower remained a theme of the series. Marc Gasol had a forgettable performance during his 7-for-23 shooting display. Mike Conley was 0-for-6 on threes, but did have nine assists with just a single turnover. His facial injury clearly prevented him from being his regular self during these six games. Memphis also received 16 points from Vince Carter and 15 from Zach Randolph.

For the Warriors, no NBA team can match its long-range shooting ability. They combined for 29 made threes in Games 5 and 6. Beyond having two of the most efficient shooters in the league, those being Curry and Thompson, the Warriors are now landing deep threat contributions from Andre Iguodala. He went 11-for-23 on three-pointers in this series. 10 bench points from Shaun Livingston, and another double-double from Draymond Green were additional factors in the Warriors snatching Game 6.

A turning point in the game was Curry drilling a shot beyond 60-feet at the third quarter buzzer. ESPN announcer Hubie Brown thought that Jeff Green was fouled on an Iguodala defended jumper prior to Curry’s shot. The loose ball was picked up by the MVP, and he launched an outrageously difficult heave that hit a beautiful combination of rim and net. The replay showed Iguodala having his hand all over the ball, putting into question what the usually insightful Brown thought of the play. What’s not debatable is that Curry’s bucket drained a previously energetic crowd.

Memphis faces an uncertain future with the 30-year-old Gasol set to hit the free-agent market. The Grizzlies have knocked on the door constantly, always making quality postseason runs. But more realistic title aspirations or a larger paycheck could pull Gasol elsewhere. The Warriors’ future is less complicated. The organization is enjoying its most successful season in about 40 years, and its decision to replace Mark Jackson with Steve Kerr has proven itself to be a brilliant move. Either the Rockets or Clippers against the Warriors would make for a high energy series.