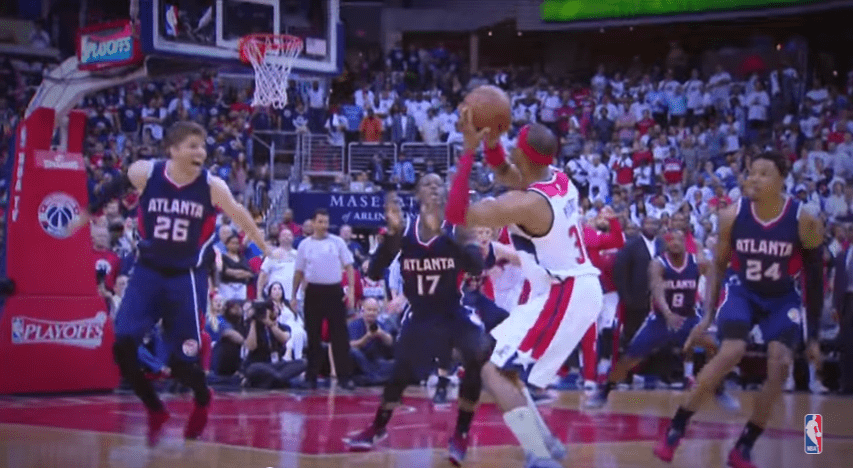 First the Capitals choked on a 3-1 lead over the Rangers and were eliminated from Stanley Cup contention and now the Wizards have been eliminated in dramatic fashion.

I mean, he hit the shot! The Truth struck again — only this time he was probably 0.3 of a second too late.

In a world before instant replay, this game goes to overtime and the Wizards possibly force a Game 7.

Instead, it’s series over — and so too may be Paul Pierce‘s career.

“I don’t even know if I’m going to play basketball anymore,” Pierce told the media after the game.

“These rides throughout the NBA season, throughout the playoffs, are very emotional. They take a lot out of not only your body, but your mind, your spirit.”

Fair enough too — Pierce was at center of nearly every big play of this series: In Game 3, Pierce hit the buzzer-beating bank shot where he called “game”, in Game 4, Pierce missed a wide open look to tie up the game in the dying seconds, in Game 5, Pierce spoke too soon and called “series” before a miraculous put back by Al Horford with 1.9 seconds remaining and then, Game 6, Pierce with possibly one of the greatest shots of all time waved off on review.

And while Pierce will be remembered mostly for his end-of-game heroics in this series, the story of the game was the Hawks focus to go at him on the other end of the floor. DeMarre Carroll dropped in a team-high 25 points and a mismatch saw Paul Millsap use his size to take advantage of the older, smaller Pierce.

The Wizards found themselves in a 15-point hole during the third quarter but were always going to dig themselves out of it and turn this into a ball game because, well, it’s this series and very little made sense in this series but for the guarantee that each game would likely come down to the wire.

Game 6 was no exception. To go into the details of this game would be almost pointless. Exhibit A: Kevin Seraphin, who had played 10 total minutes in the first five games of the series, played 28 in the deciding Game 6 — more than Marcin Gortat, Nene or Paul Pierce.

The Wizards, who finally caught up with the rest of the league in the playoffs and rebranded themselves as a spread-the-floor three-point shooting ensemble, were failed by their new found range. Washington shot just 4-18 from beyond the arc in Game 6 and shot just over 36 percent for the Game.

The shooting woes weren’t just limited to the Wizards. Kyle Korver, who had a historic shooting year for the regular season, couldn’t get anything going in this series. He shot a paltry 31% from the field over the past six games including just 28% from deep.

As for the Hawks, well, in typical Hawks fashion, the team is slowly but surely finding what made them so successful during the regular season.

Some precision execution down the stretch leading to easy assists for Jeff Teague and two easy lay-ups for DeMarre Carroll were oh so Hawks — and they sealed the game.

Now, they’re headed to their first Conference Finals in 45 years. They’re reward for doing so? A date with LeBron James and the Cavs.