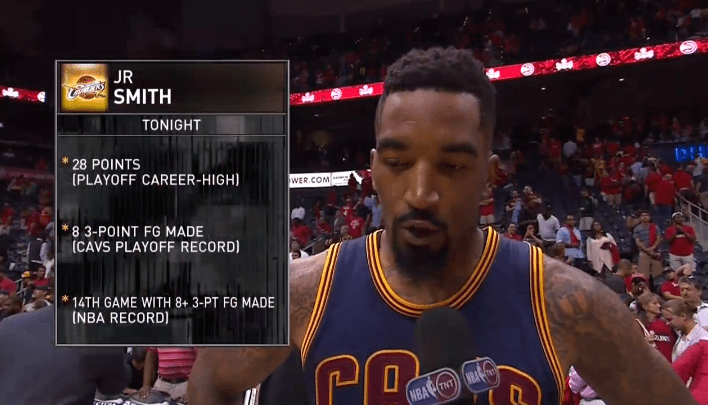 Screen capture courtesy of the NBA.

Though the Atlanta Hawks had home court advantage, they faced an aggressive albeit injured Cleveland Cavaliers team. Still, a few late mistakes and a bad injury resulted in a 97-89 Cleveland victory.

The Atlanta Hawks controlled the game early in the first quarter by beginning with a 12-6 run. Jeff Teague seemed focused and commanded the floor to set the pace of the game and prevent LeBron James from doing so. It worked to a certain extent, as Atlanta closed the first leading by six points. Already, Cleveland looked like a mess and nothing like their most recent playoff performance.

Entering the second quarter, the Cavaliers looked to gain the lead despite their paltry shooting in the first. While Cleveland was only hitting on 35 percent from field-goal range, the Hawks were having a blast as they shot with ease, as their 61 percent shooting would attest to that.

Still, Cleveland was only a possession or two away from grabbing the lead. Much of that was due to the disparity in rebounds. Despite the Hawks’ stellar shooting percentage, they were virtually absent on the glass. Cleveland dominated early, grabbing more than twice as many boards as the Hawks. But more importantly, Cleveland outrebounded Atlanta 15-6 in the first quarter, which kept the Cavaliers within reach despite their awful shooting display.

But you can’t rely on a team like the Cleveland Cavaliers to maintain such a poor shooting percentage for three more quarters. After all, this is a team that on occasion can shoot lights out. You don’t have to look back far to see that. In the final game of the Eastern Conference Semifinals, Cleveland swiftly defeated the Bulls in a one-sided affair by a score of 94-73; they were bound to get their rhythm back against the Hawks, which they did partly due to the playoff performance of J.R. Smith.

Smith’s performance must have added salt to the wound to every Knicks fan watching, given that the team fell to number four in the NBA Draft Lottery just yesterday. The Cavaliers’ bench contributed 28 points in this victory. Scratch that—J.R. Smith single-handedly scored 28 off the bench. James Jones and Matthew Dellavedova went for a combined 0-9 from the field, but that didn’t matter at all given Smith’s performance. Among those 28 points was a franchise-high 8 three-pointers off 12 attempts.

Game 1 at home looked like a losing effort in more ways than one for the Atlanta Hawks. Already trailing in the fourth quarter, DeMarre Carroll—arguably the Hawks’ best player in the playoffs, in spite of being the only player in their starting five to not make the All-Star team—suffered a non-contact injury to his left knee in the middle of the fourth quarter. Before the series began, Carroll already garnered the most attention of any Atlanta Hawk given that he would guard LeBron James to prevent him from taking over the game.

All hope seemed to be lost, for this game and possibly for the series, as Carroll writhed in pain on the floor. He was carried off the to the locker room by the trainers and did not return. The mood was very somber given the severity of the injury. Carroll, a free agent after these playoffs, will have an MRI to see if the knee injury is as serious as it looked.

As unfortunate as Carroll’s injury was to both his personal health and to the Hawks’ playoff hopes, Atlanta proceeded to go on an 11-1 run led by Kent Bazemore. With the help of a circus fadeaway and-one and a running layup, Bazemore somehow made the game a two-point possession, despite leading by 18 points.

Still, when you have LeBron James on your team, you can rest easy and let him take over the game, which he elegantly did as he drove it in for a driving slam with 37 seconds left remaining in a 6-point game (due to defensive miscommunication on Atlanta’s part; seriously, Kyle Korver just stood there in astonishment as James attacked the rim). The only Hawk to score thereafter was Jeff Teague, who ended his night with 27 points. Aside from securing the victory, LeBron James scored 31 points off 12-26 shooting to go along his 8 rebounds and 6 assists.

As injured as both teams are, their respective competitiveness remains. Atlanta has now lost home-court advantage and must win the second game at home in order to avoid 0-2 deficit that will surely spell doom for the Atlanta Hawks team that was white hot during the regular season. For what it’s worth, a stellar J.R. Smith performance of that caliber seems highly unlikely. Nevertheless, their chances may be determined by Carroll’s left knee.