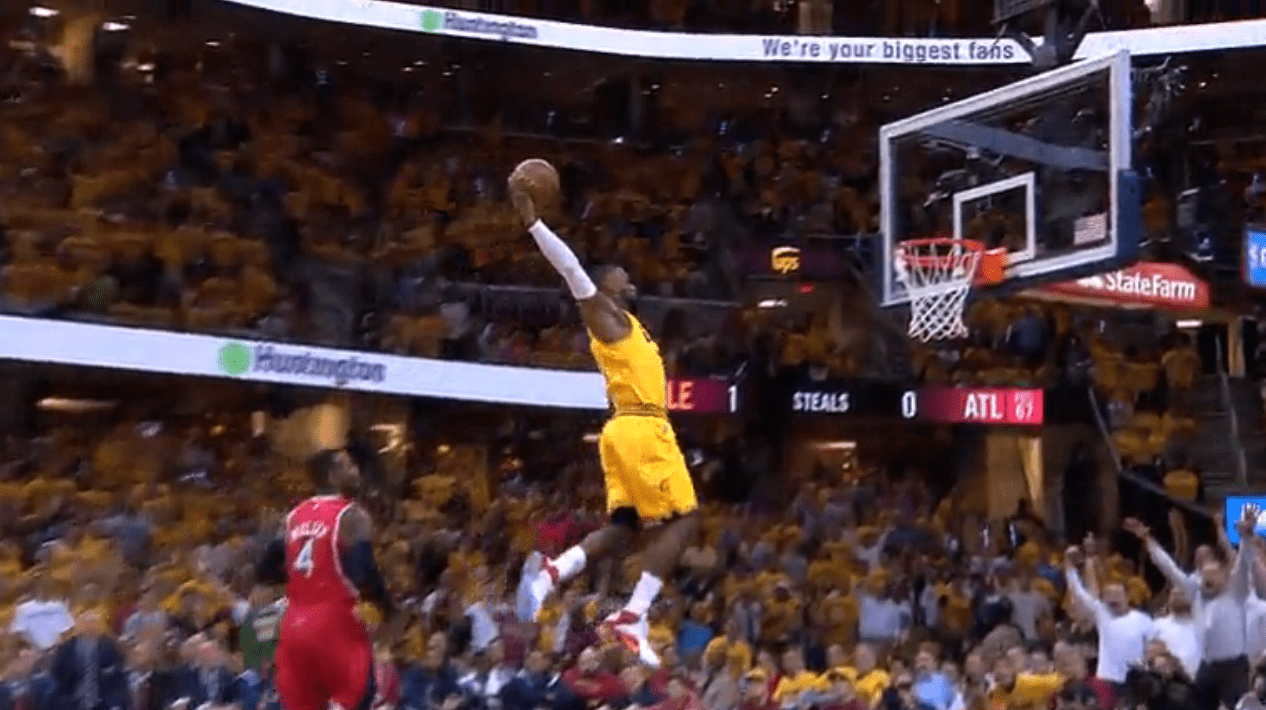 In what was undoubtedly the most anticlimactic game of the series, the Atlanta Hawks submitted to the Cleveland Cavaliers in Game 4 by a score of 118-88.

The Cavaliers are now headed to the NBA Finals.

The start of the game was an early indication for the grim results of what was to come for the Atlanta Hawks. While Jeff Teague and Kent Bazemore attempted to do their best and not get swept, the Cavaliers countered with effective ball distribution. Every starter on Cleveland’s roster scored a bucket within 4 minutes. LeBron James was not able to replicate his 39-point performance, but he didn’t need to. He ended his night with 23 points, 7 assists, and 9 rebounds.

Even Timofey Mozgov was able to get retribution for being labeled as an accessory to a dunk poster throughout his career (you can thank Blake Griffin for that one) by dunking on Paul Millsap. Indeed, everything was going well for the Cavaliers.

Typically, such an optimistic statement bereft of any problems would be followed with an antithetical situation wherein the momentum of the game shifts. Nope. That didn’t happen in Game 4, as the Atlanta Hawks did what’s best and begrudgingly stayed down for the rest of the game. The Cavaliers were up against the Hawks by 17 points at the end of the half and only piled on the sorrow by beating them by 20.

Cleveland was dominant in all aspects of the game. In just the first quarter, the shooting from outside the paint spoke volumes. Whereas Cleveland shot 8-16 from outside the paint, Atlanta was a paltry 1-9. Much of the long range shooting was once again attributed to LeBron James selflessness, dishing the rock to the likes of J.R. Smith, Iman Shumpert, and especially Matthew Dellavedova. Dellavedova used his newfound reputation as a dirty player by playing mind games with Bazemore who seemed peeved at the notion that the guard from Australia had enough clout to alter the momentum of an already unbalanced game.

Understanding the repercussions of having an injured player on the court, the Cavaliers nevertheless allowed Kyrie Irving to start the game. He finished his night with 16 points, but he’s most importantly shaking off the rust that comes with an injury. With the exuberance of victory in his hands, Irving can now ease into playing at 100% until the NBA Finals begin.

Irving and the rest of the Cavaliers are now headed to the Finals, the franchise’s first since 2007. For what it’s worth, the 2007 Cavs didn’t fare well in the Finals. The San Antonio Spurs swept them. That squad featured the likes of an aging Zydrunas Ilgauskas, an overpaid Larry Hughes, and an emerging Daniel “Boobie” Gibson who admittedly was productive due to the attention given to LeBron.

Now, eight years later, LeBron has a formidable cast in Smith, Shumpert, and this team’s Boobie Gibson in Matthew Dellavedova. And this is technically James’ B-squad given that Kevin Love is hurt and Kyrie Irving is sill ailing from an injured knee that caused him to sit out two games in this series.

The NBA Finals begin on Thursday, June 4 at 6:00p.m. PDT/9:00p.m. EDT. Their opponent is yet to be determined, as the Golden State Warriors currently lead the series against the Houston Rockets 3-1.