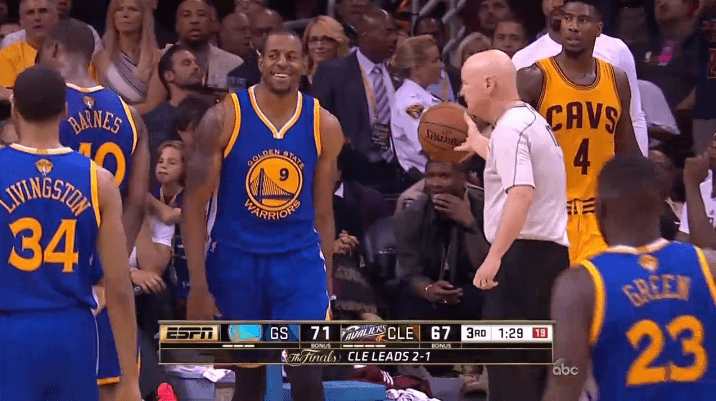 With the help of newly-minted starter Andre Iguodala, the Golden State Warriors found their stride in a Game 4 victory against the Cleveland Cavaliers.

The past few games have been painstakingly horrid to watch as a fan. At this point, it is clear that there is a definite distinction between the regular-season Golden State Warriors, whose meteoric rise propelled them ahead of every team in the already-dominant Western Conference, and the NBA Finals rendition of the Dubs, who seemed marred by hesitancy, headlined by a struggling Stephen Curry in the first half.

The formula head coach Steve Kerr had used throughout seemed virtually ineffective against the Cleveland Cavaliers team, which essentially forced them to witch things up. Prior to tip off, there was no indication that the team would do so. However, once the starting lineups were announced, it was clear that the Warriors were looking to change the formula that has the Cavaliers up one game, and two games away from a championship, in the NBA Finals.

Instead of Bogut in the starting lineup, the Warriors opted for a smaller rotation. In his place would be Andre Iguodala who accepted a role off the bench, a crucial move that allowed players like Harrison Barnes and Draymond Green to flourish this season while providing a reliable spark once the starters needed breaks.

Kerr’s strategy seemed to falter at first. The Cavaliers hit the ground running and went on a quick 7-0 run started by Timofey Mozgov and Tristan Thompson who would take advantage of the smaller starters in the paint. With the momentum echoing that of Game 3, the Warriors had no other option but to call a timeout to maintain their composure. Curry then hit a quick three-pointer and essentially hit the reset button for the game, and probably the rest of this series.

Curry himself did not do as well as one would anticipate. He continued to fall into a first-half slump, but did contribute eight point by the half, definitely better than his previous attempts in the series. In Curry’s 41 minutes on the court, he scored 22 points off 8-17 shooting and 4-7 from the three-point line.

Matthew Dellavedova, who at times seemed like a formidable opponent opposite Curry, was not as effective in Game 4 as he was in his game-clinching savior-mode performance from Game 3 where he scored 20 points but had to be taken to a Cleveland Clinic due to severe cramps after the game. According to reports, the cramping may have been caused to Delly’s pre-game ritual of drinking coffee. In order to combat the cramping in Game 4, he forwent his ritual and didn’t perform as well, scoring 10 points while shooting 3-for-14 from the floor.

But blaming Delly, who the media has been quick to dub the Cleveland darling that LeBron desperately needs to win a title, is a little easy, especially when considering the lack of support from other Cavalier players. J.R. Smith and Iman Shumpert were also nowhere to be found. They went for a combined 9 points off 4-of-23 shooting. With support being paper thin, save for Mozgov who had a team-high 28 points, James needed another playoff performance like in the other three games. At this point, as absurd as it may sound, a 40-point performance is borderline pedestrian from James. Unfortunately, Cavs fans were not witness to such a performance from James who scored half that in 40 minutes. To be fair, James did suffer an injury where his head hit a nearby camera, which caused him to bleed profusely at one point.

With that, Curry regained his confidence in the second half and with bench support and timely dunks from Iguodala, the Warriors were able to seal the victory fairly early in the game, which ended in a score of 103-82, the largest margin by which any team in the Finals has won. This is partly due to the Warriors finding their stride during adversity.

After the game, Kerr confessed about the lack of change prior to tipoff. “I lied. Sorry.” Kerr shouldn’t apologize to the media or to fans in general. Instead, those who are witnessing the 2014 Finals should thank him for the 2-2 series tie. With at least two more games left in the NBA Finals, we are finally getting glimpses of the Golden State Warriors team that paraded through the playoffs as opposed to the squad that struggled in games 2 and 3.