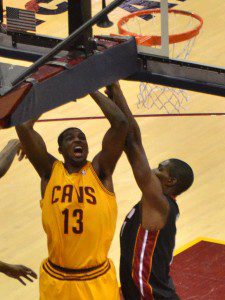 This past weekend I was working when I encountered the most intoxicated man in the room, and I don’t work at a bar or restaurant. I had seen the man before and decided to indulge him in conversation, as he was alone and easily the loudest person in the place. This place being an arena.

After he took a sip out of both of the Mike’s Hard Lemonade’s in either hand and rambled about his passion for Cleveland sports, he made a good point. Why haven’t the Cavs signed Tristan Thompson yet? And not just that, but whether or not he is worth a max contract.

Severely drunk/random man aside, the point is an interesting one. The reason being, it was initially believed, based on many reports, that LeBron James would not sign until Tristan had a firm deal set in place. Then LeBron signed his deal. Tristan is still a free agent.

There is no need to panic yet, but is there any need to panic at all? I have been watching Tristan every year since he entered the league, and he is undoubtedly a solid player. But he may not even be a starter for the next four to five years.

This situation comes down to the same that comes up in MLB arbitration cases. The worst qualities must be brought to light in order to prove a point that ultimately comes down to several million dollars going to a multi-millionaire. But that last point is an eternal argument for another day.

So there are negatives to Thompson. If he was getting a mid-level deal, this would not need to come up, but that is not the case. For a player to make around $80 million, he needs to be elite, or named Joe Johnson.

Stat-wise, Thompson is average. I know, there are many other things than just points, rebounds, and blocks, but they do still tell some of the story. In the regular season, he only averaged 8.5 points and 8 rebounds a game. But with a team filled with LeBron James, Kevin Love, and Kyrie Irving, the postseason is what matters, so let’s look at that instead. Even with Love being out a majority of the time, Thompson only averaged 9.6 points and 10.8 rebounds. Not anything that warrants a major raise.

The best thing Thompson brings to the team is his offensive rebounding, but he fails to let that translate into more points of his own. And while his stats may be affected by the LeBron-iso offense that was prevalent throughout the team’s Finals run, Thompson should have put up better numbers based on the type of money he is looking for.

And these numbers came when he was averaging over 36 minutes a game. With a healthy Kevin Love and Anderson Varejao, Thompson’s minutes will only go down. His offensive rebounding is helpful, but points are what will be the focus, and that means Kevin Love will be the main power forward in end of game situations. Thompson could find some time in rotations not involving Timofey Mozgov, but Mozgov proved that he is indeed capable of holding his own in nearly any situation, unless the other team is going entirely small with their rotation. Even with that being the case, Mozgov may still be a better option than Thompson because of his scoring ability.

The fact is that Thompson is only talking about a max deal for two reasons. The first is because his agent also represents a certain LeBron James. The second is that his value inflated greatly due to the national spotlight of the playoffs. He is a solid rotation player who was thrust into the starting lineup because of injuries. He held his own, but the fact that LeBron could only leave the floor for about thirty seconds at a time showed that no one but himself, Irving, and Love are deserving of max deals.

The question for Thompson is whether he will stay with the Cavs for less money, or go to another team and take the max. He seems to want to stay in Cleveland, and playing well will still allow him to go for a max in his next contract. All this being said, it is still possible Dan Gilbert will just tell GM David Griffin to give max money and increase his luxury tax payment. Anything is possible with an owner who has billions.