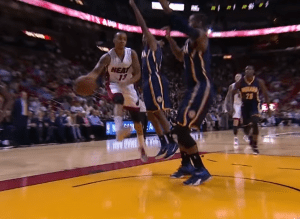 LeBron James‘ “favorite player” in the 2014 NBA draft now has something in common with James: both are former Miami Heat players.

The Sun Sentinel confirmed Sunday that the Heat will trade Shabazz Napier to the Orlando Magic in exchange for a protected 2016 second-round pick. The Heat only will get the pick from the Magic if Orlando has one of the NBA’s five best records in 2015-16. Otherwise the obligation from the Magic would be extinguished without anything in return to the Heat.

The deal, and the terms, are expected to be formally announced sometime on Monday.  Florida Sun Sentinel