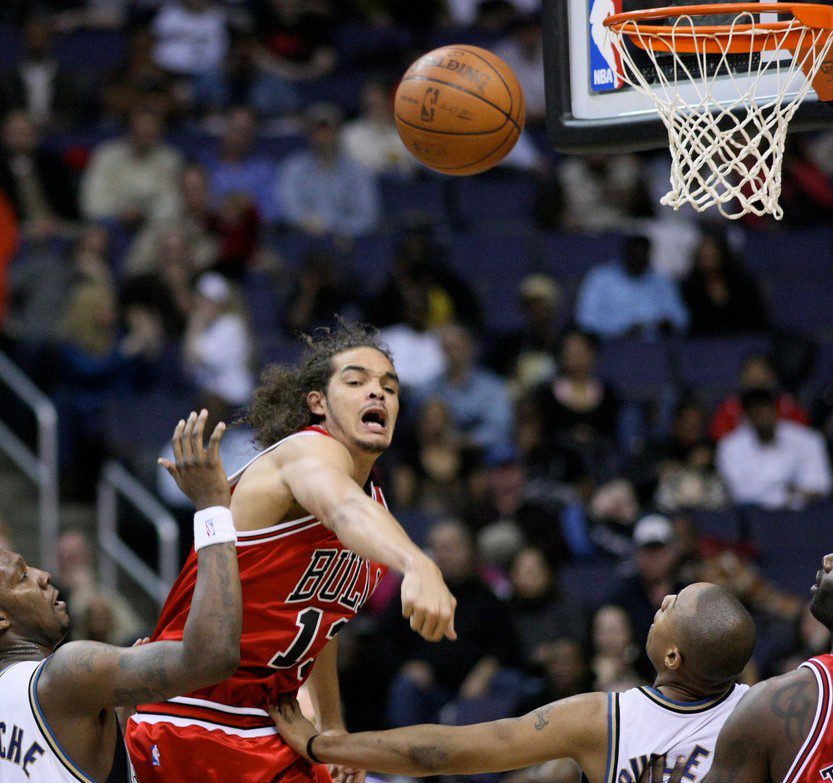 Before the 2014-15 NBA season I predicted that the Chicago Bulls would have their best offensive season in the Tom Thibodeau era. For a variety of reasons this wasn’t the case. Derrick Rose (surprise, surprise) couldn’t stay healthy and even when he was “healthy” never looked like prime Derrick Rose. Pau Gasol never quite meshed with any of his frontcourt counterparts. First Round draft pick Doug McDermott literally did nothing. Jimmy Butler started the season hot but faded down the stretch. And maybe most importantly, Joakim Noah wasn’t the same Joakim Noah he was the season prior.

The Joakim Noah of 2013-14 was the one who the Bulls ran their offense through. He grabbed defensive rebounds and pushed the ball up the floor. He caught the ball at the elbow and made quick, correct decisions. He attacked the basket like he attacked the glass for many years before, and he solidified himself as the best passing big man in the game. On top of all of that good stuff, Noah rightfully won the Defensive Player of the Year Award,

The Joakim Noah of 2014-15 didn’t do anything of those things. He definitely wasn’t as comfortable offensively without the ball in his hands, which was the case the majority of the time now that the Bulls had other weapons to create offense. He was hobbled with knee and foot problems all year long, and as a result he couldn’t attack the basket or even make defenses honor him as a weapon. His defensive output slipped just as badly.

On one hand, I feel like we can chalk up a down season for Noah on nagging injuries that never quite healed all the way because he has a ton of Thibodeau minutes under his belt, and because a new crop of playmakers surrounded him this year he never got too comfortable in his new role. On the other hand, when a big man hits a wall, they usually don’t come back from it. When their bodies start breaking down after they turn thirty, it’s all over; they’re never the same. Noah turned thirty last February, and his body had started betraying him long before that.

Let’s go back to that first hand, the hand that’s making a case for a Joakim Noah resurgence in 2015-16. It’s incredibly hard to imagine Noah, the NBA’s loudest and brashest player for at least half of a decade now, going down with a whimper. He’s not the most talented guy in the league, at least in the ways that we typically measure that kind of thing, but he’s arguably the most competitive. Nobody has been tougher or more fearless on the court. That’s Noah’s shtick; it’s why he was a lottery pick in 2007, and it’s the biggest reason why he finished fourth in MVP voting two seasons ago.

Noah kept the Bulls alive and more impressively, relevant in the post-healthy Derrick Rose era. Every year they’ve not only made the Playoffs, but put up one hell of a fight in the process, even though they’ve almost always been undermanned-manned and clearly not as talented as their opponent.

So yeah, it’s tough to imagine that a warrior like Noah would just fade into irrelevancy. But the unfortunate reality is that is the most likely outcome. Noah claimed during the offseason that he’s healthier now and hungrier than he ever has been. The best case scenario for Noah might be a move to the bench, fewer minutes, and as was the case when the Bulls were shorthanded in the past, the keys to the offense being handed over to Noah when he’s on the floor with predominantly bench units. Regardless, I’m convinced Noah will find a way to justify his Top 50 inclusion, and he’ll do it with a holler and several chest pumps.