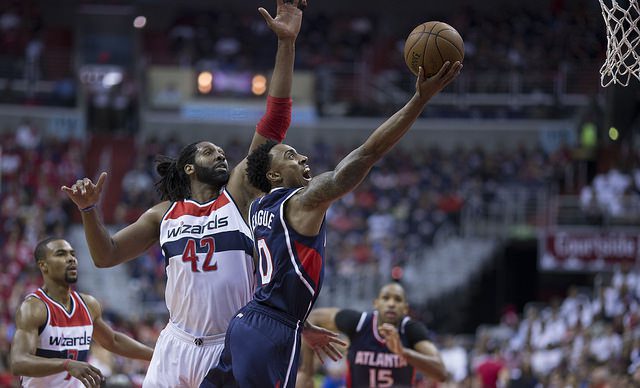 Remember how back in the beginning of the year all five Atlanta Hawks starters were named Eastern Conference Player of the Month after they went 17-0 in January? Yeah, well I almost used that somewhat dubious distinction as a precedent to write just one massive Hawks section in my Top 50 Countdown, but then after a moment of weakness I remembered that it was pretty asinine that a collective unit could be named “Player” of the Month. That would be like if you told me, “O.K. Sonny, I’m going to take you to McDonald’s and I’ll buy you any one cheeseburger you want,” and then I proceeded to order five McDoubles, stack them on top of each other and tell you, “Yeah, this is my one burger. Thanks!”

Sure, combining the four remaining Hawks starters and sprinkling in a dash of DeMarre Carroll would’ve made things much easier for me. After all, if any team advanced the ideology of team basketball being greater than iso-ball, it was the Atlanta Hawks. Had they won eight more postseason games, they would have surpassed the 2004 Detroit Pistons as the greatest modern day example of a starless team winning the NBA Championship. A lot of novices probably never caught a Hawks game last year until they were in the Playoffs, and most of them wouldn’t be able to tell you even two starters.

The one logical step left in my process was determining what exactly these roles were, how well they were filled and how important they were to the team. I would argue that Kyle Korver filled his role best (more on this coming up in the next few days), but Al Horford and Paul Millsap were probably the most important players to the Hawks. DeMarre Carroll and the subject of today’s write-up, Jeff Teague, came across to me as the two more “average” players.

I swear that’s not a knock on either player. It’s just the reality of the situation. Kyle Korver is the premiere floor spacer/outside shooter alive. Al Horford was probably the best shooting big man in the NBA, and Millsap is one of the most versatile stretch fours in the league. Teague, for lack of a better term, was an average point guard. It would be a stretch to say that based on his body of work from last season, or based on the almost always trusty eye test, that Teague was a star point guard. He is a very good player but not great or transcendent, and there is nothing about his game that transcendent either.

Teague is fast, crafty with his dribble and at his best, he can be one of the better attacking point guards in the league. It’s no coincidence that Atlanta’s offense had a machine-feel to it when Teague was collapsing the defense and his teammates were cashing in on the open looks that resulted. Here’s the harsh reality for any big time Teague backers out there: there are plenty of point guards who can do what Teague does, and a whole lot more.

His jumper is still coming along; it’s not quite the weapon that it Hawks fans would want it to be. He hasn’t developed a knockdown mid-range jumper like Chris Paul, nor has he found a way to score near the rim with the efficiency or volume that Tony Parker used to. Parker might be the best case scenario for Teague long-term. Like Teague, Parker’s long distance jumper has never gave opposing defenses fits, but if Teague can attack pick and rolls with the same ferocity that Parker did at his peak, that’s when Atlanta’s offense will truly thrive. To do so, Teague will have to continue to sharpen up his mid-range game (it looked better this past season compared to two years before), and he’ll especially need to be better in that weird floater/runner sort of area about 4-10 feet from the rim that is right in Parker’s wheelhouse.

The unfortunate thing for Teague, his Hawks teammates and all relevant Spurs over the past decade or so is there will always be the debate about whether players who play for Gregg Popovich or any Popovich disciple are really as good as they appear, or if they are benefactors of superb coaching and a great system. Answer me this: why can’t the coach, the players and the system all benefit from one another? And if they do, why is this a bad thing? Perhaps Teague deserves more credit than we’ll ever give him, and maybe he’ll never get it because he’s doing all the right things for a bunch of guys who are making him look better than he really is because of it. Was that last sentence confusing? Good, it was supposed to be. Now you know how I’m feeling trying to figure out where Teague should be on this list.

I wish I could tell you that next year I’ll have a better idea of where Teague should be ranked, but you and I both know that’s untrue. The Hawks will be just as fun to watch this coming season as they were last year, and that means next year the players on the team will be just as difficult to rank as they were this time around.