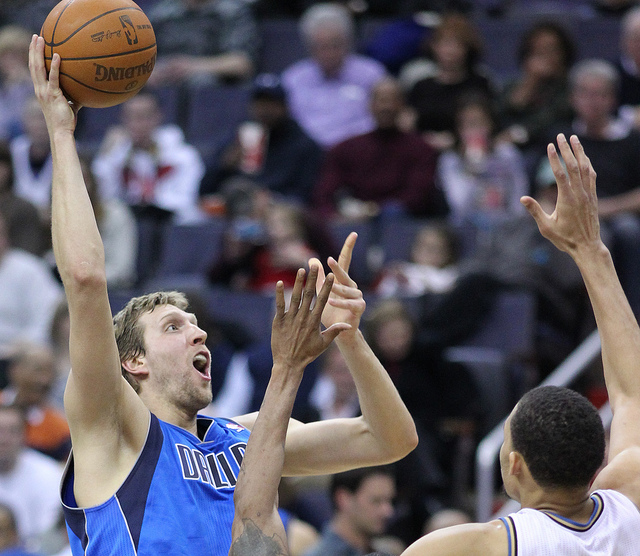 As Dirk Nowitzki enters his 18th season in the NBA, I feel the same way about him as I felt when he was entering his 16th season. Dirk’s 15th season was a disappointment by just about any calculation. For the first time in his career, it really looked like Dirk’s best days were well behind and gone forever. He was banged up and a few very noticeable steps slower. His points per game dropped below 20 for the first time since 2000 and, as I’ve phrased it before, that weird German swagger that usually oozed out of one of the best international basketball players ever, was absent.

And then Dirk came out in the 2013-14 season and crushed everyone in a way that only Dirk can. He put on a mid-post clinic, killing defenders with the one-legged fallaways, the running hooks and trailing threes. His scoring increased, he played 80 games after suiting up for just 53 in the prior season, and he finished 14th in the MVP voting that season, and he probably should have been higher. Once again, that Nowitzki German swag, or as the Germans would call it, Stolzieren, was on display.

Just as quickly as Dirk regained his stolzieren, he lost it again last year. It’s not unusual that a 17-year vet sees his game deteriorate. In fact, it’s more unusual that Dirk was able to find his footing after a down season in year 15. It’s a tragic scene when seven-footers hit a wall. They can’t jump, they can’t run and their hands start to function as well as my Grandma’s do. If Dirk gets back to an All-NBA level in 2015-16, it would be something we have never seen before. Then again, would it really surprise you that much?

Until I’m given a reason to believe otherwise, I’m going to assume that Dirk won’t develop Grandma Giuliano hands any time soon. He’s never been a runner or a leaper, though you could probably argue that young Dirk was deceptively athletic. What Dirk still does at an elite level is shoot. And even if his shooting numbers dropped across the board last season, the big German still has enough cred built up as a dagger-slinger that defenses not only have to honor him, but completely contort itself to stop him.

Do me a favor; if you’re watching the Mavericks play this year just pay close attention to how defenses (and I don’t just mean Dirk’s man, I mean the entire defense) move around when Dirk is the roll-man, or more often, the pop-man, in a pick and roll at the top of the key. A good defense won’t leave him alone, and if they do he’ll make them pay. If both defenders involved in the pick and roll jump the ball handler then there better be another defender rotating up to Dirk. Or else, as I said before, he’ll make them pay.

Now more than ever though, pairing Dirk with a point guard or primary ball-handler that can put an equal or at least comparable amount of pressure on the defense as Dirk as a penetrator and as a shooter is vital for Dirk’s own success. Dirk can’t isolate on the wing or post up double-digit times per game anymore and make it through a regular season. That’s also not a sustainable way to build an offense, relying so heavily on a 37 year old seven-footer who isn’t as efficient as he was ten, five or even three years ago. It’s not a surprise that once the Mavericks traded for Rajon Rondo and changed their identity (as we know now, for the worse) that not only did the Mavericks suffer, but Dirk suffered as well. Dirk’s scoring and shooting numbers went down post-Rondo trade and the Mavericks, who had won 70 percent of their games before they acquired Rondo barely won 50 percent of their games afterwards.

Rondo is long gone now and the Mavericks are rebuilt their roster in the offseason. Monta Ellis fled to Indiana and Tyson Chandler is now a member of the Phoenix Suns. DeAndre Jordan was an almost-Maverick and Wes Matthews (coming off an Achilles tear) and the Shell of Deron Williams are real-life Mavericks now. Rick Carlisle will work his magic and the Mavericks, as they have been for nearly two decades, will at worst be a fringe Playoff team. But don’t be fooled; the success of the Mavericks season hinges on how much, if anything substantial, Dirk has left. And as I said back in 2013, “history tells me that I shouldn’t overlook Dirk Nowitzki.”