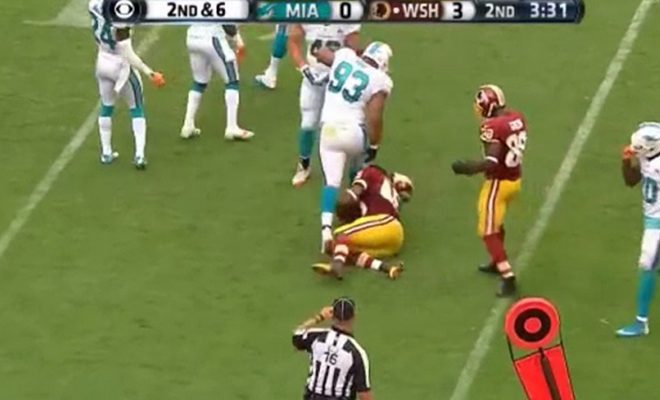 For those of you unaware there is a bit of a history with Ndamukong Suh.  There have been far too many incidents of things happening “accidentally”, and we’re adding one to the pile.

In the Week 1 matchup with the Washington Redskins, Suh tackled Alfred Morris.  On his way up it appears as though Suh knowingly removes Morris’s helmet as part of getting back to his feet and heading to the huddle.

For the time being the league is content with the explanation that it was incidentally, and Suh’s errant knee was the reason for the helmet popping off.  There is no fine or punishment forthcoming.  If it was anyone else in the league does this incident isn’t even discussed?  It’s probably not even noticed.  With a track record as long as Suh’s, the NFL was forced to take a second look.

It’s a good thing that a player with this much scrutiny didn’t just sign the largest contract for a defensive player in the history of the NFL.  I mean, if he did, and he was suspended because of something like this, that could the league’s image.

Even more than him putting up one tackle and one assisted tackle in his debut might.

But it’s not like either of those things happened.