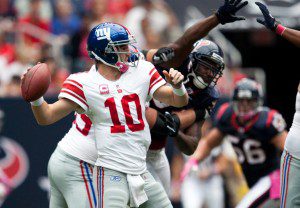 The perfect play call takes into account the situation and gives you the most opportunity for success.

With under two minutes to go in the game, the New York Giants elected to throw a pass instead of run the ball, giving the Dallas Cowboys just enough time to pull off an improbable victory.

The New York Giants needed to make sure the clock was running.  A sack would have been better than throwing the ball away in that situation and Eli Manning should have known that, not to mention been reminded of it by the coaches.

The Seattle Seahawks elected to run the ball on a fourth-and-one in overtime in their season opening matchup against the division rival, St. Louis Rams.  The play call was different from the infamous Super Bowl slant pass, but the net result was the same.  A turnover (this time on downs) that lost the Seahawks the game.

It would appear you should be running the ball wide after faking an “A” Gap dive with your up-back, something Marshawn Lynch excels at.  Maybe the right play call here is probably a toss-option sweep?  It gets the Rams moving laterally giving Wilson has the option to throw, run himself, or pitch to a running back.  With a mobile QB this was the best play call possible, and of course it’s not what was called.

No NFL game comes down to a single play call, but so many can have just a few be critical junctures of the game.

It’s important to remember that when you’re figuring out who is calling your plays.