Rather than giving you the skinny via two separate columns on two of the bigger surprises to this years top 50 list, I decided that since Rudy Gobert and Hassan Whiteside are so stylistically similar and the choice of one over the other proved to be so darn difficult, I’d let these two lanky bigs duke it out in the second of three Dr. Jack Breakdowns in my 4th Annual Top 50 NBA Players Countdown. Contain your excitement, we’re just getting started!

Neither of these two are Olajuwon’s or McHale’s offensively, but they both have their strengths. Both Whiteside and Gobert project to be great pick-and-roll finishers, but Whiteside edges out Gobert in the category. Gobert’s body of work as a primary scoring option is non-existant. He’s never featured in the post, and until he proves that this is an area of his game that he’s improved, it’s for good reason. He’s exclusively finishing on rolls to the basket and scoring on putbacks.

Whiteside doesn’t have a treasure chest of moves in the post, but he’s already an above average scorer there. Per NBA.com, Whiteside was one of only five guys in the league who took at least 100 shots from a post-up and made at least 50 percent of his shots, and there’s still not too much fluidity to his post game. His jump hook is solid and he’s shown a decent touch from outside of the paint. From 8 to 16 feet, Whiteside hit 48 percent of his 58 field goal attempts, a better percentage than Anthony Davis shot from the same area.

Whiteside blocks a ton of of shots, effects even more and rebounds at a crazy rate, but there wasn’t a tangible transformation in Miami’s team defense after Whiteside cracked the rotation like there was in Utah’s once Gobert was inserted into the starting lineup. Gobert, an exceptionally long-armed presence in the paint, was the league’s premiere interior defender, holding opponents to 40.4 percent shooting at the rim according to NBA.com, and that rim protection was a big reason why Utah’s defensive rating went from fourth worst in the league before the All-Star break to best in the league after the All-Star Break … and that was by a pretty wide margin. The gap in the Defensive Rating between Utah and Memphis, the second best defensive team, post All-Star Break was the same as the gap between Memphis and Orlando, the 20th best defense after the All-Star Break. Getting rid of a minus defender like Enes Kanter and replacing him with just about anyone would result in an improvement. But Gobert’s emergence caused a full-fledged culture shift in Utah.

The four best nicknames for Gobert are better than any suggested nickname for Whiteside that I’ve ever seen or heard. In Whiteside’s defense, there isn’t a better nickname in sports right now than The Stifle Tower, and with a name like Hassan Whiteside he doesn’t even need a nickname. There is no nickname that could better build his brand or improve his star power than his own name.

Jay Bilas loves three things more than anything else in the world: Basketball, Wingspan and Upside. Hassan Whiteside and Rudy Gobert are both basketball players and they both possess tremendous wingspan and upside. Gobert’s wingspan (7’9″) was just a little bit longer than Whiteside’s (7’6″) when they were measured at their respective Draft Combines, but Whiteside probably has a little more upside now because of the edge he has as an offensive player. I’m sure if anybody could get a hold of Jay Bilas and ask him to make a choice between Whiteside and Gobert, he’d sit there trying to make up his mind for a half an hour and then have to take a cold shower before he passed out.

It’s a strong victory for Whiteside in this category and part of it could be credited to the fact that he plays in Miami and Gobert plays in Salt Lake City. If you’re a League Pass subscriber, you probably remember the late March game where Andrew Wiggins and Gobert engaged in a war that likely had every French-Canadian feeling a little conflicted.

You didn’t need League Pass to see Whiteside destroy the Chicago Bulls on a Sunday afternoon in January. That’s when Hassan Whiteside Mania become a full-blown craze. Whiteside tossed up the rare points-rebounds-blocks triple double in just 24 minutes of game action, and I swear to God he swatted at least 15 of Taj Gibson shot attempts, even though Gibson took just ten shots and Whiteside was credited with only 12 blocks.

Gobert and Whiteside are both in the Tyson Chandler/DeAndre Jordan mold of centers, only their ascension in the league has been between five and ten times more bewildering than any other guy like them. Gobert is French (I personally don’t know any French people, so this makes him Tony Parker, Nic Batum and Boris Diaw very rare in my book) and he was sitting on Utah’s bench behind the defensively inept Enes Kanter for a year and a half before the Jazz realized what they truly had with him. Then he tossed up 16 double-doubles in 29 starts post-Kanter, and was at least 75 percent responsible for turning Utah into a defensive juggernaut in the second half of the year.

And then there is Whiteside. He got drafted by Sacramento in 2010, had a few cups of coffee in the D-League, went overseas to play in China and Lebanon, and then he became the biggest story in the NBA for a month. I never thought I’d see something crazier in the NBA than Linsanity, but everything that happened with Whiteside was unequivocally more kooky. How did it take so long for anyone to give Whiteside a prolonged look? How come nobody saw that he is a physical freak and with a little polishing he could dominate? Wait a second … I SAW THAT! 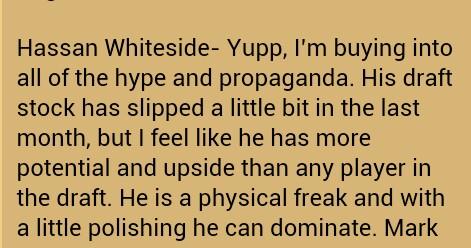 That’s a quote from me back in June of 2010. I’d say that I don’t mean to toot my own horn, but honk honk, beep beep, toot toot, woot woot and every other noise a horn might make. I’ve gone to bat for Whiteside for five years. Even when he was playing for the Reno Bighorns and Sichuan Blue Whales I never wavered! If I never made another correct sports prediction in my life at least I could die happy knowing that Whiteside got there. He’s become the player I expected he could be and I couldn’t be more proud. This must be what being a father is like.

Utah is the popular “sleeper” pick to be a potential Playoff team in the Western Conference next season (If a sleeper pick becomes popular, it no longer is a sleeper pick), and that has almost everything to do with the Gobert-inspired turn in the right direction they took post All-Star Break last season. The safer pick for the distant future might be Gobert, but when it comes to making Whiteside inspired predictions, I don’t usually go down the safe route. With a full training camp under his belt, Whiteside should mesh a little better with teammates that include fellow Top 50 entries Dwyane Wade, Chris Bosh and Goran Dragic next season. All three are ahead of Whiteside on the list this year, but if Whiteside’s coming out party during the 2014-15 campaign is any indication, that might not be the case after next season.