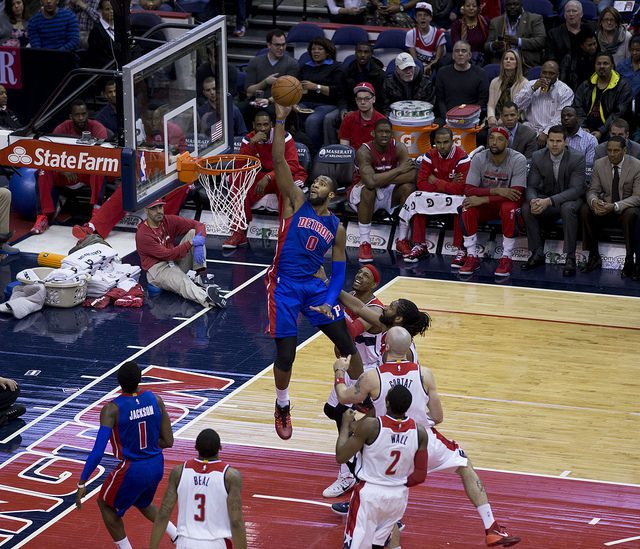 Last year the theme of my Top 50 NBA Players Countdown section on Andre Drummond was that the 2014-15 season would be the one where the Detroit Pistons center finally broke out. I don’t like to recycle concepts from previous season’s Countdowns, but this is really all we’re waiting on with Drummond, isn’t it? Wouldn’t it be fair to say that since Stan Van Gundy has finally made an imprint on this Pistons roster, this is the year where either the Drummond breakout season happens, or we decide that he’s always going to be what he is right now.

What Drummond is right now is a big-bodied freak of an athlete who is elite in some areas and severely underdeveloped, or at least deficient in others. Drummond’s post game is rudimentary, he isn’t totally there defensively and he’s an utter liability late in games because he’s arguably the worst free throw shooter to ever play in the NBA. That’s not even hyperbole.

On the bright side, Drummond is very comfortable as a pick and roll roll-man. Per NBA.com, of the 67 players who attempted at least 80 shots rolling towards the basket, only DeAndre Jordan, Tyson Chandler and Tristan Thompson shot a higher percentage than Drummond did. He moves well without the basketball, making timely cuts to get himself dunks, and he’s the premiere offensive rebounder in the league, and on pace to be one of the best offensive rebounders in league history. According to Basketball-Reference Drummond is one of five players to lead the league in offensive rebounds in back to back seasons, along with Dennis Rodman, Tyson Chandler, Charles Barkley and the late Moses Malone. Drummond has also posted two of the 12 best single-season offensive rebounding totals in NBA history.

Drummond brings a lot more to the table than he takes off, but the deficiencies in his game are preventing him from making a leap from solid young athlete with a ton of promise to bonafide star. Maybe we just need to be a little bit more patient. After all, he’s only 22 years old and entering year four in the league. He’ll never be a marksman at the line, but improvement from sub-forty percent to at least fifty percent is very possible. He made big time strides as a post scorer from year one to year two, but there wasn’t much more of that in year three. Despite the lack of development on the block, Van Gundy featured Drummond there more in year three than either of the two previous seasons. Predictably, Drummond’s field goal percentage dipped.

Drummond was dead last in field goal percentage among the 32 players who attempted at least 150 shots in post-up situations last season. Drummond will need to improve in this area of his game, even if it’s not where the majority of his shots should be coming. He has no real go-to-move at the moment aside from a right-handed jump hook that he takes from basically anywhere in the paint. After that becomes consistent, a couple of counter-moves would be nice additions.

The development of Andre Drummond has almost as much to do with the way Stan Van Gundy uses him as it does the work Drummond puts in. SVG is clearly trying to get the right sort of weapons in place around Drummond so he can play as much like Dwight Howard used to for him as possible. This means getting Drummond as many looks as possible where he is comfortable as a scorer; rolling towards the basket. Drummond isn’t as skilled as young Dwight was on the block, but the rest of the physical tools are all there. Or so most people think.

At least next year we’ll probably know what we’re getting with Drummond. At worst, he’ll be right back around the 40th spot in the rankings, because everything he brings to the table warrants inclusion. At best, he’ll be climbing towards the Top 25 and giving us flashbacks of what it was like to watch Dwight Howard in 2008.