As head coach Doc Rivers sat on stage during the Clippers’ media day, one question seemed to pop up more than once. That question was about the team’s starting small forward.

The team is stacked with a few players who could realistically fill that void. In fact, that was their priority this offseason which they accomplished a few times over. Now the team has Paul Pierce who was recently a clutch playoff performer for the Washington Wizards. The Clippers hope he can call game for them later in the season.

But the team might not even get there with how deep they are. The Clippers also traded for Lance Stephenson. Though both players can theoretically play the three position, they way they do it is miles apart—and that’s the way Doc Rivers wants it. When asked specifically about Stephenson, Rivers said “I think he gives us a great defender—a multi-positional player—which I stressed over the summer.”

All throughout media day, Doc preached the multi-positional nature of the newly acquired Clippers players. Though their core has now been together for quite few years, every seasons brings along a new cast of supporting players. The instability from season to season, amongst other things, can be to blame for the Los Angeles’ faltering in the playoffs. With the malleability of Pierce and Stephenson, the Clippers aim to patch up any vulnerabilities depending on the matchup at hand.

Not only did the Clippers acquire Lance and Pierce, but they also signed a metaphorical deal with last season’s devil in their signings of former Houston Rockets Josh Smith and Pablo Prigioni. The two were of course instrumental in the Clippers playoff collapse that resulted in the Rockets reaching the 2015 Western Conference Finals. Even Smith is aware of the high standard being set on this team simply on paper. Without any qualms, Smith noted that “This is the deepest team I’ve played for.”

But even then, none of those players are set to be the starting small forward according to Doc Rivers. He is leaning towards Wesley Johnson who is making the long trek across the Staples Center locker room for a more prosperous team and season. his inclusion, amongst a few other Clippers, is representative of how deep the team truly is. After the first few rounds of interviews were over, Clippers staff were ready to end  the session only to realize that they had completely overlooked a batch of players. This happened more than once, which goes to show that the invariable depth of the 2015-2016 squad is something Clippers brass is not used to. 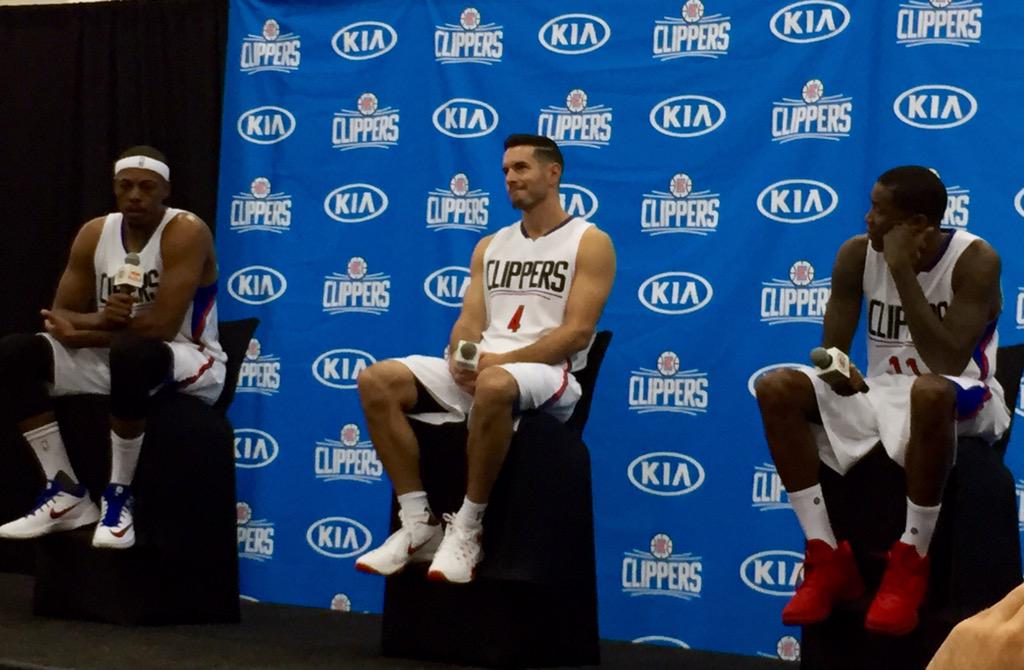 Oh, and about that entire offseason drama that occurred surrounding free agent DeAndre Jordan: one thing we can definitely surmise from that wonderful day of the National Basketball Association on the world wide web (especially Twitter dot com) was that the food was good. Seriously, that seemed to be the default response from most Clippers about the situation.

Rather than succumbing to the hype that seems everlasting, the Clippers made it clear that DeAndre Jordan’s last minute change of heart was as civil and banal as one could imagine a contract signing going. They all said very little. Doc Rivers dissolved any notion of beef with the Dallas Mavericks early on.

“Unless Mark [Cuban] and I are going one-on-one—or we get in a cage match—I don’t think it matters.”

But Jordan did take the time to compliment Blake Griffin on his social media savviness.

DeAndre Jordan on the great emoji war of the NBA offseason. #Clippers pic.twitter.com/MAPTQDOBt4