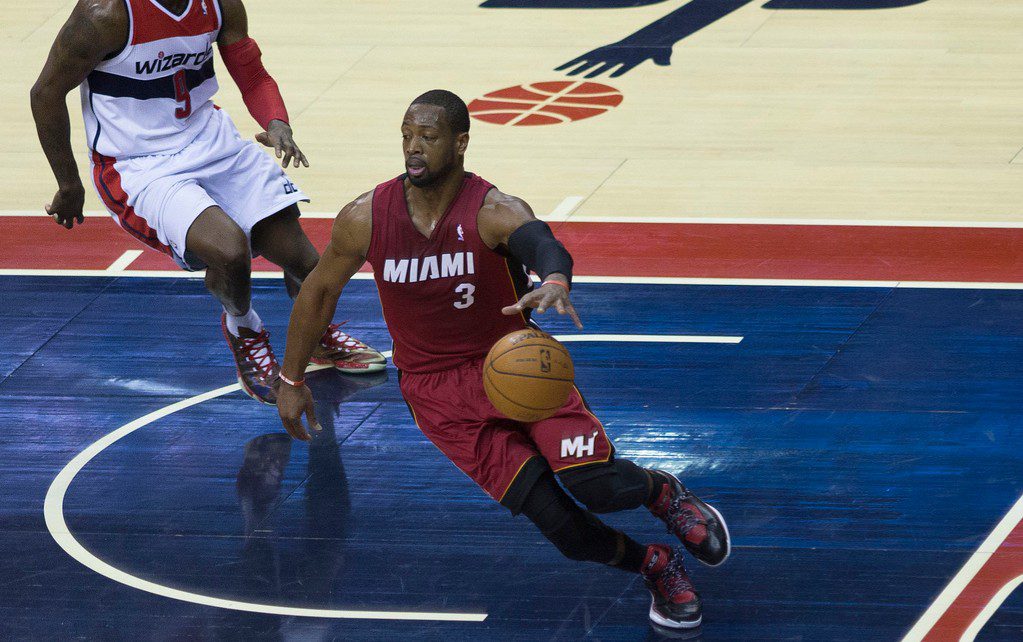 Over the past few years I’ve faced some criticism in the comments section because of my playfully critical, yet absolutely justified and legitimate thoughts and opinions on Dwyane Wade. I don’t hide the fact that I’ve never been the biggest Wade fan. Even in the four seasons that preceeded my favorite basketball player ever deciding to take his talents to South Beach, I wasn’t a Wade fan and I never pretended to be. In some way, it became my shtick to throw shade at Dwyane Wade.
However, I never discredited Wade when it came to ranking him in my Top 50 Countdown or for his career achievements. Wade at his peak was sensational; it wasn’t a prolonged peak, but for five years or so Wade was somewhere between the third and fifth best player in the NBA. He’s the second best shooting guard since MJ and probably the fourth best shooting guard ever. Post-MJ, he’s been one of the seven best players in the league along with Kobe Bryant, Tim Duncan, Kevin Garnett, LeBron James, Dirk Nowitzki and Shaquille O’Neal (please note that those players are mentioned in alphabetical order; maybe next year I’ll decide to rank the best players of the 2000’s, but not right now).

Even this year as a broken down Wade heads into his 13th season, I’m expecting that I’ll have him ranked higher than most would, and that isn’t a new concept. It should be noted that in the previous three seasons of ranking players, my placement of the Heat shooting guard has actually been higher than ESPN’s annual #NBARank in two of those three years, and in the one season he wasn’t I had him ranked 9th when ESPN had him ranked 8th.

At this point, we know what we’re going to get from Dwyane Wade throughout the course of a season. It would be a bigger surprise if Wade played a full slate of games than if he missed at least half. 50-60 seems the most realistic at this point in his career. Without a basketball savant controlling the action offensively (i.e. James, LeBron) Wade’s field goal percentage will probably continue to drop. Last year Wade’s field goal percentage was the lowest it’s been since the 2007-08 season, and the third lowest of his entire career. It doesn’t help that Wade still doesn’t have a brutally efficient mid-range jumper, the kind that Kobe Bryant and Michael Jordan developed as they aged.

Twelve seasons of attacking the basket has clearly taken it’s toll on Wade. He can’t do it with reckless abandon like he did when he won the Finals MVP in 2006. He can’t do it like he did in 2009, his best regular season to do. And without LeBron James (and for half of the year last season, without Chris Bosh), the bulk of the attention by opposing defenses is now paid to Wade. Without the ability (or maybe the desire) to attack the basket multiple times per game, Wade’s game has changed. Per Basketball-Reference, Wade took just 23 percent of his field goal attempts between 0 and 3 feet from the rim last season. In comparison, the percentages from that same range from the 2010-11 season to the 2013-14 season were 37, 37, 37 and 35 percent. Last year Wade took a higher percentage of his field goal attempts from mid-range than any other season.

This aging process hasn’t helped Wade’s cause on defense either. His commitment at that end comes and goes, and he’s never been one to get back in transition. Again, this isn’t something that will change overnight. Even when the Heat were winning titles and scrambling all over the place defensively, Wade would go through stretches where he most definitely benefited from the fact that he was playing with a bunch of other hounds out there.

You’re probably sitting there thinking, “Well wait, why did Wade even crack the Top 30 then?” Well, you have to factor in the potential for a deeper and more talented Heat roster being able to take some of the every night burden off of Wade. You have to factor in the fact that three or four times a year Wade will play a three or four game stretch where he just kills the opposing team; he’ll will himself to the line, fly around on defense, get on one of those hot streaks from mid-range. Not to mention, even though Wade hasn’t added a killer mid-range game to his repertoire, there are some areas in which his old man game is highly advanced. His shot fake is a work of art, so good that he’ll routinely lull defenders into jumping on shots that they should barely be contesting anyway. And as was on display during the Heat’s recent reign of excellence, Wade’s movement without the ball is spectacular.

Without Wade last year the Heat’s offense was a dumpster fire. With Wade on the floor it was an above average unit. Of course, some of that has to do with a lot of those minutes minus-Wade corresponding with minutes that were sans Chris Bosh, but it speaks volumes that Wade was able to keep an insanely banged-up Heat team in the hunt for a Playoff spot until the final week of the season.

I don’t know how many more seasons Wade has left, or while he’s still around how many games he can give the Heat. I do know that for all of the criticism I’ve thrown Wade’s way over his career, I was really hopeful that he’d decide to take his talents to Cleveland this offseason and join forces with LeBron James and the Cavaliers. It didn’t work that way and I was being irrational for thinking it was a serious possibility. But if that doesn’t tell you I can be rational about Dwyane Wade’s place in the league, I don’t know what else does.