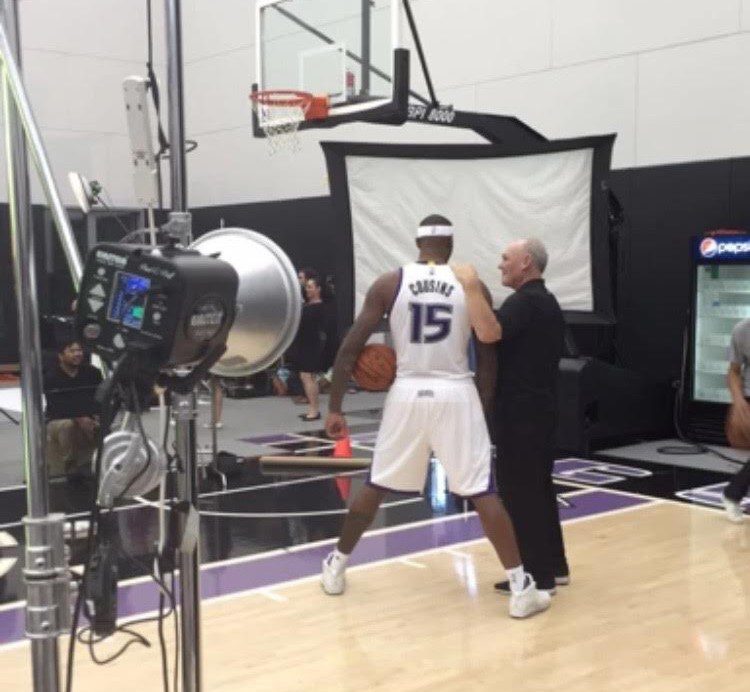 A week long escape from the media, tension, and rumors that surrounded this offseason. A chance for the team to finally get on the court together. Defusing the tension from three long months of pressure and frustration.

Yet, this so-called “pressure” and “frustration” wasn’t apparent during the 2015 NBA Media Day in Sacramento. The players, coaches, and front office members were surprisingly enthusiastic to get the season started. No tension. No angst. Creating a mellow and laid-back ambiance amongst counterparts.

The team appeared to thoroughly enjoy each others company. A facade? Maybe. Still, a very different culture than what had been previously been reported in preceding months.

The Sacramento Kings were walking with a chip on their shoulder. They were hungry for the season and excited to showcase their new identity to the NBA world. A completely different type of swagger to the “Suicide Squad.”

Sitting down with the players and coaches, the Sacramento Kings certainly didn’t seem like themselves. Not having won more than 30 games in a season in over 7 years, this new attitude may come to the chagrin of many. This year is different.

The Kings are Ready for the Season

The 2015-16 NBA offseason was anything but pleasant for the players of the Kings organization. If anything, it was a test for this new squad. Through all of the smoke of the media, the Kings were able to establish a basis for this new-found attitude. Ready to get to work.

Who better to unify the effort of this Sacramento team rather than their ring-leader, George Karl, himself. Immediately addressing the summer, Karl believes that  “a lot of people [said] a lot of stupid stuff and now [the team] gets to work and prove everyone wrong.” A reoccurring theme throughout Sacramento personnel.  It was apparent that the chance to prove the media, skeptics and critics alike is a huge drive for the organization.

Sacramento Believes They are a Playoff Team

It will be a decade since the Kings were a playoff caliber team. In 05-06, Rick Adelman lead Sacramento to a 44-38 record with Brad Miller leading the team in win shares at 9.1. A different time for the Natomas area.

With the final season in Sleep Train Arena, the players made it particularly apparent how excited they were to finally get back to winning. Newly signed center. Kosta Koufos, believes the Kings “have all the pieces to be a success. [He] feel[s] confident enough that [they] can make the post season.” Koufos wasn’t the only player that wholeheartedly believed in the potential of the Kings.  Throughout the day, players would reiterate their aspirations to surprise the league. From Marco Belinelli to added Seth Curry, every player’s apparent main focus is to reach the next level.  To earn respect within the division. Unified together as the villains of the NBA. A sort of camaraderie that has yet to be seen since Chris Webber owned Center Court with C-Webb.

“We [have] a chance to surprise some people,” added center, DeMarcus Cousins. Nobody more eager to get on the floor than the All-Star center. Cousins has displayed outstanding growth in his maturity and professionalism within the league. The Kings would be a shell of a team had social media, analysts, or doubters had gotten to him. This season, Cousins looks to add to his career year in 2015. Both mentally and physically, Cousins has given everything to the organization and it may finally pay off. Cousins briefly touched on this by finishing his interview stating that “it took a lot to get here. But, I’m excited for the spot we’re in. I’m excited about the future.”

Things Kings Have a Chip on Their Shoulder

The Sacramento Kings are much watch TV this coming fall. Whether viewers will be tuning in for entertainment or good basketball is completely up to choice. The players recognize a pressure to not only succeed but at the cost of the opinions of others. In order to prove them wrong. Scrutiny has surrounded this team for the past three months and the opportunity to speak back on the floor is approaching quickly.

Excited to embrace the role of wearing the black hat, is Kings rookie Willie Trill Cauley-Stein. When asked if the Kings were going to surprise the league, a brightness elicited from Trill. “We like the Suicide Squad,” Trill started, “if we come together we can be so nice. We can be contenders.”  Accompanied by a sudden sense of rationalism, Willie also acknowledged that “if [the players] come together as a team of brothers, it’s going to be scary. If not, it’s going to be a long year.”

In seasons past, Sacramento had been a weigh station for players careers. Ulterior motivations and different agenda’s has plagued the city for years. Until now, every player was brought in this offseason with a unifying goal. Win. The Kings not only need to win but want to win. An important step in making the appropriate steps to reach the next level. The Sacramento Kings may finally be playing with a purpose. If the team ever becomes even semi-cognitive of its true potential, the rest of the NBA should be worried.

Rajon Rondo had his first and potentially last NBA free agency this summer. Finding home in Sacramento with a 1-year contract. Rondo was incredibly optimistic for the season and his future in Sacramento. “We have the best big man in the league. There is no reason to go anywhere else.” Rondo stated.

Rajon was a major topic of discussion throughout the day with nothing but support from his constituent veterans. There is a lot of excitement for the point guard battle during training camp this week. The team genuinely believes in the new found versatility occupying the position. The addition of a healthy Rondo gives the Kings a depth that is nearly unparalleled in the Western Conference. Emphasizing the pace of the game, Sacramento now has the ability to control the entire ebb and flow of the court at all times.

Professionalism in the NBA is something that is often overlooked. With multi-million dollar salaries, egos, and reputations, it is often disregarded to push an agenda. According to popular reports, this is exactly what was brought to light this previous summer.

For those of you who live under a rock, newly hired Sacramento head coach was publicly open with criticism DeMarcus Cousins towards the ending of the 2014-2015 NBA season. This lead to an awkward summer full of undisclosed tension as the two attempted to rekindle trust within each other. While this instance has been partially recovered, it was another part of a long record of disrespectful behavior towards the center. The breaking point for all media sources.

Since then, Karl and Cousins have publicly rekindled their office relationship. Budding together a fully functional and respectable atmosphere for the team. They have a long way to go, but Vlade Divac has made miraculous steps in the establishment of a winning culture in Sacramento.

Both parties were bombarded with questions pertaining to the seemingly outdated material. George Karl responded but nothing but praise for the young center stating that “if [he] had to grade [his] guys giving [him] a summer, Cuz gave [him] an A+ summer. Physically, an A+. Mentally an A+.” This a near 180-degree change from when George Karl stated that there was no player on the roster that was “untradeable.”

Cousins had a similar response when asked about the current state of relationship with the coach stating that “[Karl], that’s my man.” As aforementioned, nothing like this would ever change overnight. Yet, the two had a seemingly casual and melancholy afternoon together with the press. Even getting together to discuss a few things away from all of the attention.

For Kings fans, this season should be the most interesting season in recent memory. There is such a wide variability in the outcome of the season that nothing but time will be an indication of the success of this team.

A team that began by a miraculous offseason from the front office. Bringing in some of the best players available and establishing a young core. A team that has been endorsed by the coaching staff, and lead by their fearless leader in Coach Karl. A team of players that believe in themselves. A team with a new found confidence and swagger for the season.