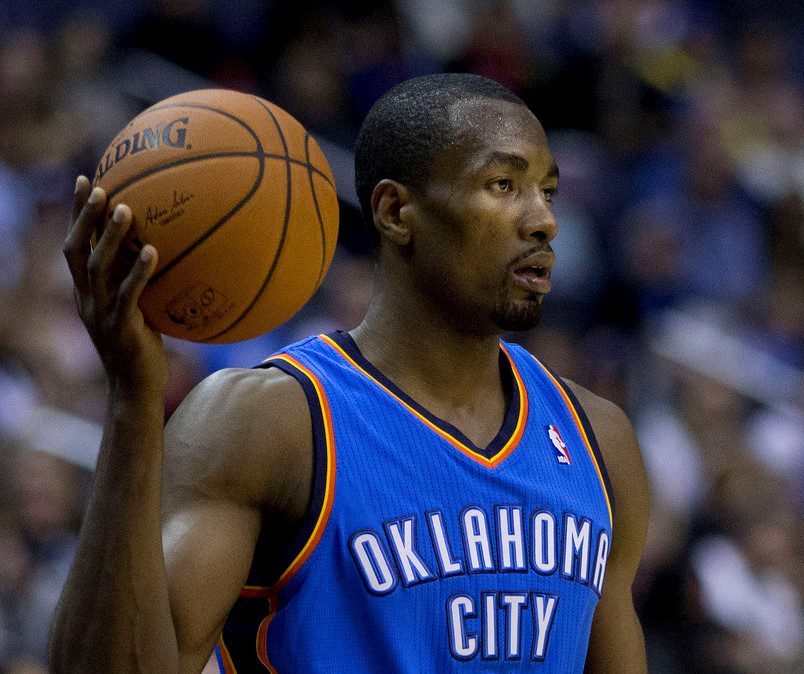 It’s funny … as the game of basketball continues to evolve, what we as fans and connoisseurs of the game want to see are players who can do a lot of different things well. The quest to find the jack-of-all-trades is what matters most for teams; it’s why Erik Spoelstra was praised for implementing position-less basketball in Miami. It’s why Draymond Green was such a lightning rod of opinions and hot takes throughout the postseason. It’s why the thought of Anthony Davis turning into a three-point shooter scares the shit out of the rest of the league. It’s also why I am baffled that Serge Ibaka isn’t universally praised as one of the truly unique and impactful players in the league.

Just consider what Ibaka is:

He’s a 6’10”, long-armed, active shot blocker/rim protector on a team that lacks rim protectors and is heavy on spastic, over-aggressive perimeter defenders who take a ton of chances and absolutely positively need a rim protector behind them or else the Thunder would give up 125 points per game.

He’s also a 6’10”, floor spacing big man who gives every penetrating wing on the roster a whole lot more space to work with because he’s turned himself into a marksman from mid-range and respectable three point shooter.

He’s also a 6’10” versatile offensive weapon that was seemingly hand crafted to be a power forward for a pick-and-roll heavy team since he can pop or roll towards the hoop after setting a screen.

I’m (almost) just as guilty as most people are of shorting Ibaka the credit he deserves. For a good part of this process I had Ibaka slotted for a spot in the mid-forties. Something about last season just rubbed me the wrong way. An injury cost him the last month of the season. He never looked like he was capable of momentarily stepping into the second banana role while Kevin Durant was out. And without putting too much thought into it, it baffled me that Ibaka was spending so much time on the perimeter on offense. Then everything kinda just clicked, and I realized I was missing what made Ibaka special in the first place.

He’s one of the few guys who is a legitimate two-way player. He’s one of the even fewer guys who can score efficiently from everywhere on the floor. He had the presence of mind (and maybe, credit to Scott Brooks, the nudge from the Thunder coaching staff) to expand his range so offensive dynamos Russell Westbrook and Kevin Durant had more room to work. Check out this insightful quote from Ibaka talking about expanding his range, included in a Kirk Goldsberry piece at Grantland.

“That shot makes it easier for Westbrook, for KD, for all of our teammates to work in space. So I have to shoot that shot. It’s hard when people question it, but I know my teammates believe in me, and they want me to shoot it every time when I’m open, so that gives me a lot of confidence.”

Those words really opened up my eyes and made me think about how I might be seeing Ibaka differently if the Thunder had stayed healthy and won a title last year, or the year before that matter. We’d be applauding Ibaka not only for his defense, but for his willingness to expand his range and diversify his offensive attack. In a way, it would be similar to everything we said about Chris Bosh when the Heat won back to back titles.

Then again, Ibaka isn’t exactly the same kind of weapon that Bosh is. Bosh can create his own shot and carry an offense. Ibaka needs effective weapons alongside him in order to thrive. Luckily, he has Russell Westbrook and Kevin Durant, two of the best scorers in the game who draw a ton of attention away from everybody else on the floor. He also now has a head coach in Billy Donovan who will likely put Ibaka in a million pick and rolls this season.

That is of course good news for Ibaka, and good news for anyone who is invested in the popular opinion of him as an NBA player. As always, if the Thunder stay healthy they’ll be a serious contender for the NBA Title, and that caveat doesn’t just include Westbrook and Durant. Ibaka isn’t nearly as talented as either of the two Oklahoma City alpha dogs, but in a roundabout, he’s probably just as important.