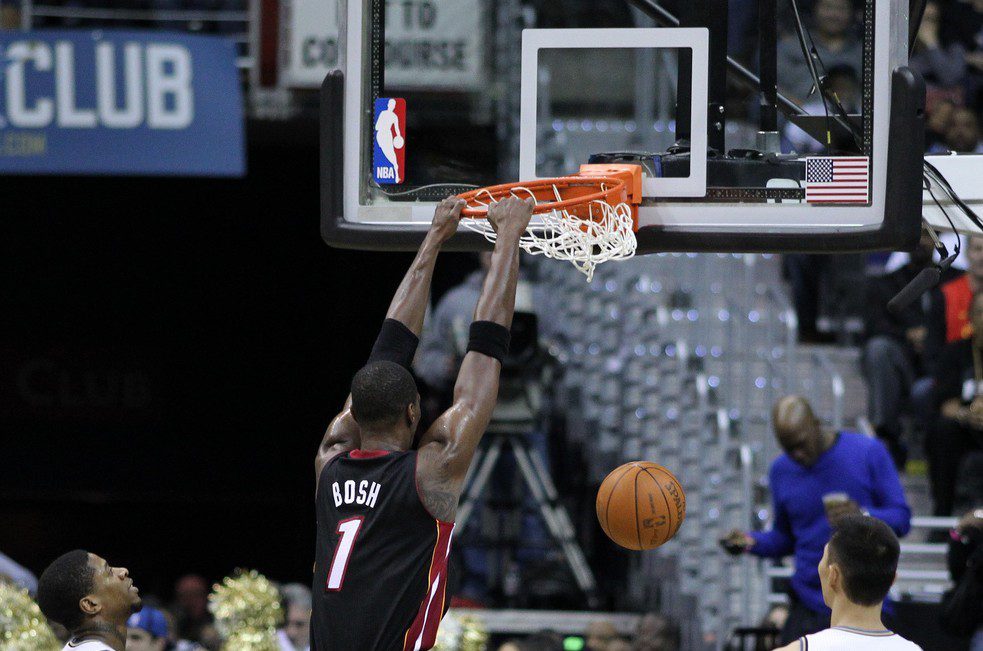 After four consecutive seasons concluding in the NBA Finals, twice winning the Championship, the end to Chris Bosh‘s 2014-15 campaign wasn’t nearly what the ten-time All-Star could have hoped for or expected. Miami failed to make the Playoffs, but Bosh didn’t see the premature end to Miami’s season because his season ended even more prematurely.

In late February Bosh was sidelined for the rest of the season due to blood clots in his lung. First and foremost, the part of this story that matters most is how it has seemingly concluded. Bosh has since made a full recovery and made his pre-season debut last night. Whether you love a player or despise them, their physical well-being should always come before any team allegiance you might have, especially when it’s something much scarier than your run of the mill ankle sprain.

The question now is whether Miami has the pieces in place to extend their season into late April and beyond, and a lot of that has to do with whether Bosh, who for four years played the role of third banana in Miami, can now assume the workload of a number one when he’s most likely past the prime of his career.

The answer to this question is not solely dependent on Bosh himself. Of course, we have to operate under the assumption that Bosh will be similarly effective this coming season as he was for the first half of the 2014-15 season. Bosh wasn’t a pick and roll destroying defender last year like he was the prior seasons on championship teams, a change that has as much to do with defensive scheme as it does Bosh being a step slower or less committed at that end. Miami was a little more conservative defensively, and with Bosh carrying a bigger load on the offensive end it makes sense that Miami might not want him blitzing ball-handlers and flying around the floor at all times.

If Bosh is 100 percent healthy and still moves like he did the last few seasons, his transition from guarding bulky fives to floor-spacing fours won’t be a dramatic change. If he can’t keep up Miami won’t regain their defensive form; there are just too many other weak spots and Bosh can’t afford to be one. Of course, with Hassan Whiteside anchoring the defense, you might be able to afford to have an extra weak link or two.

The outlook for the Heat offense, and Bosh’s niche in the offense in particular, is more optimistic. The Goran Dragic/Bosh pick and pop partnership is a match made in basketball heaven. Per NBA.com, of all players who took at least 125 shots as a pick and roll roll-man, Bosh had the fifth highest Effective Field Goal percentage, trailing two of the usual suspects (Dirk Nowitzki and Anthony Davis) and two clear outliers (Amir Johnson and Tyler Zeller). Even if good defensive teams send help off of non-shooters to deter Bosh from taking open jumpers all night, the Heat should be able to craft a workable offense out of sets that start here. Additionally, any Dragic/ Whiteside pick and roll will be aided by Bosh’s presence on the perimeter as a spot up shooter. It gives opposing defenses one less guy that they can send help from.

A healthy Bosh isn’t just a vital piece to an Erik Spoelstra devised offense; he’s its safety harness, or some other type of contraption that can keep one, in this case an offense, alive. Bosh is one of the very few guys in the league who can get himself a shot from just about anywhere on the floor. You can allow him to work in the post, spot up on the perimeter or isolate on the wing; all of which are O.K. outcomes for an offensive possession.

There’s good reason why Bosh was so highly coveted by the Houston Rockets as a free agent last summer. Even as he enters year thirteen now, Bosh still has plenty of game left and his ability to adapt to different roles, roles that range from spot up shooter to go-to-guy and everywhere in between, make him the most valuable player on a team that employed the best basketball player in the world only a year and a half ago.