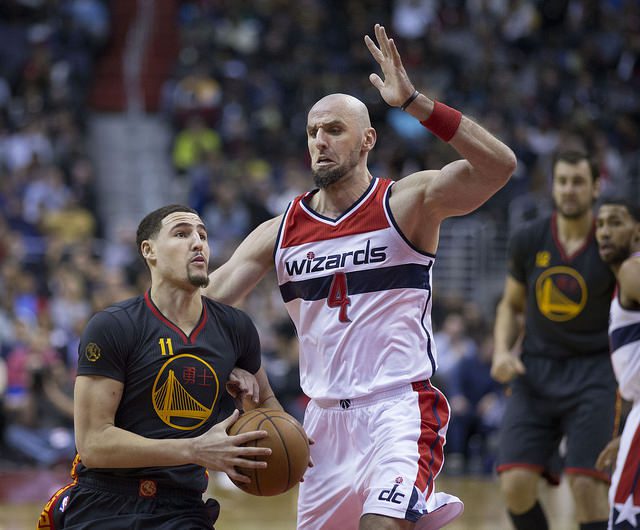 I wish I had some sort of way to measure just exactly how much basketball I’ve watched over the last fifteen years. Not only would it be cool just to know how much of my life has been devoted to watching the National Basketball Association (it’s a staggering amount of time to say the least), but it would also be beneficial so that I could properly preface the statement I’m about to make.

Klay Thompson‘s 37-point 3rd quarter explosion against the Sacramento Kings was one of the most memorable regular season moments I’ve ever experienced.

I can’t sit here and say with complete confidence that it’s number one, because there are a ton of other moments that are worthy of inclusion. Stephen Curry‘s 54 point game at MSG … Carmelo’s 62 point outburst against the Bobcats … The Heat’s quest for the longest winning streak in NBA history coming to an end in Chicago … The Miami Big Three’s first game together at Boston … The Malice at the Palace … Michael Jordan‘s last game for the Wizards.

Take a look at that list. We’re talking about games that saw superstars have one of the best nights of their career, regular season games with higher stakes than normal or landmark moments in NBA history. And then there’s Klay Thompson, putting on the greatest twelve minute scoring exhibition that I’ve ever seen in my life. If you haven’t seen it, please take the nine minutes to watch this video. You’ve never seen anything like this, and like Draymond Green said in the post-game press conference, “you can’t do that in a video game.”

This, on a much, much larger scale is what it’s like to watch Klay Thompson play basketball. 37 point explosions aren’t the norm, but on any given night Klay is capable of ripping off one of those 90 second stretches where he puts ten points on the board and all of the sudden a five point Warriors lead has ballooned to a fifteen point Warriors lead. This is Thompson’s niche. He’s one of the premiere heat-check guys in the league; capable of pulling up from 30 feet away, drilling jumpers with a hand in his face, or blowing by his defender and finishing at the basket when he closes out too hard.

Klay’s a scoring machine, on par with Kyle Korver as the best catch-and-shoot shooter in the world. Per Basketball-Reference, 91 percent of Klay Thompson’s three pointers were assisted this year, and he drilled an incredible percentage of them. Only five players attempted more than 500 three pointers this season, and the Splash Brothers were the only two of the five who hit at least 40 percent from downtown.

It goes without saying that Klay is a tremendously talented basketball player. When you are of the three best shooters alive and also routinely get the assignment to defend the opposing teams best perimeter scorer each night, you’re doing something right. But it has to be mentioned that of any player in the top 25 on this list, Klay Thompson is one of the biggest beneficiaries of playing on a team that is an ideal fit for his skill set.

Think about, Klay has been integrated in an offense that pings that ball from one player to the next to the next until someone gets a wide open look. He plays with a point guard who requires an unheard amount of attention from opposing defenses each night and a power forward who is an effing nightmare to deal with in pick and rolls, and is better equipped to find open shooters on the perimeter than any other power forward in the game.

He’s rarely, if ever, relied on to score in any sort of isolation set in any meaningful moment in a basketball game. The only times Klay will isolate is when he’s feeling it, or if he feels like he’s a shot away from feeling it, and that’s basically all the time. Klay plays within the offense, but the majority of the time when Klay touches the ball the possession ends right there. Per NBA.com, Thompson through the third fewest amount of passes of any player who played at least 32 minutes per game. Unless you’re like me, and you’re looking specifically for how many times Thompson refuses to make one more extra pass to a wide open Stephen Curry in the corner, this isn’t a terrible outcome for a possession. After all, he did shoot 44 percent from three-point range this season.

If we lived in an alternate universe where the Warriors parted ways with Klay Thompson and decided to pull the trigger on a trade for Kevin Love, I’m confident that Thompson wouldn’t be in the top 25 and the Warriors probably wouldn’t be NBA champions. Not only did the non-trade help to solidify Draymond Green’s place in the Warriors lineup, but it also ensured that the best backcourt in the NBA stay intact.