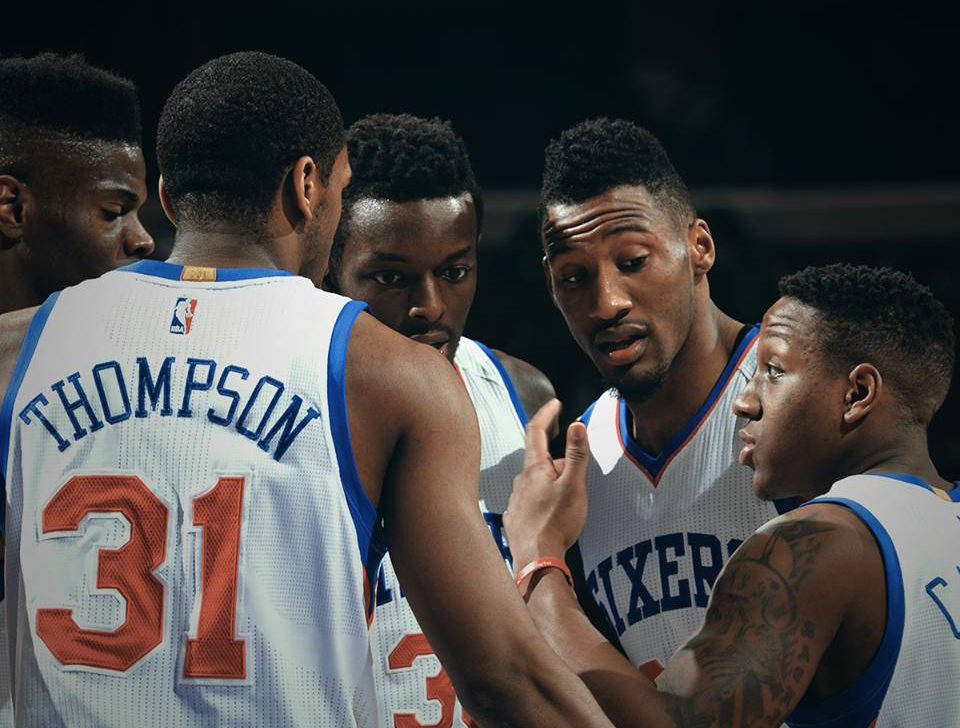 1. What significant moves were made during the offseason?
Well, it all depends on what you classify as “significant.” Of the team’s seven newly acquired players, it’s safe to assume that two, maybe three of them will have a future in Philadelphia beyond the 2015-16 season. Why? Because that’s the Sam Hinkie philosophy. Acquire a plethora of meaningless second-round picks, sign a group of subpar free agents, play well enough to give fans hope, but poorly enough to secure a top five draft pick, dump 80 percent of the roster and do it all again next season. Don’t believe me? Figure this. Since Hinkie’s arrival in 2013, the 76ers have selected 12 players in the second round. Of those 12, only two (Jerami Grant & Richaun Holmes) remain on the active roster. Last year, a grand total of 25 players suited up in a Sixers uniform. TWNETY-FIVE! Do you know how many of them still call Philadelphia home? A lucky seven. Yep, in regards to how effortlessly they sign and dispose of their players, the 76ers are the Kentucky Wildcats of the NBA. The only difference is that Kentucky wins and well, you know, the Sixers….don’t.

I’m getting off topic; back to the point. The Sixers did in fact make moves this offseason. Last year, the Sixers ranked second to last in the NBA in points per game and three-point percentage, while finishing dead last in the field goal and free-throw percentage categories. So what did the 76ers do?? They acquired scorers! For starters, they drafted a potential superstar in, Jahlil Okafor, who will fulfill Philadelphia’s desperate need for a multi-talented low-post presence. At 6’11 and 270 pounds, Okafor has an opportunity to be dominant in a 76ers’ uniform. If Henry Sims could average ten points per game as a Sixer, imagine what Okafor could do. Jahlil’s unbelievable strength mixed with his advanced foot work and soft shooting touch make him a matchup nightmare. Despite being a rookie, expect head coach, Brett Brown, to give him the green light early and often. Jahlil Okafor is the future; a rising star in the NBA. I guarantee it! But even if he goes out there and averages two points per game, that’s still two more points than Andrew Bynum and Joel Embiid combined, right?

Another significant offseason acquisition came in the form of a lean, 6’6, Billy Hoyle (White Men Can’t Jump) looking shooting guard named Nik Stauskas. Acquired in a trade with the Sacramento Kings, Stauskas is a pure shooter who knocked down almost 45 percent of his three-pointers during his two year tenure at Michigan. Although he struggled as a rookie, Stauskas’ ability to shoot will certainly help the Sixers spread the floor, leading to easier buckets for Sixer bigs Okafor and Nerlens Noel. In addition to shooting, Stauskas is known as a fiery competitor with above average athleticism and play-making ability. He occasionally ran the point at Michigan, and if necessary, he could do the same in Philadelphia. So far, Stauskas is a virtual unknown in the NBA. Sixer fans don’t really know what to expect from him. If he plays his role, I wouldn’t be surprised if he’s able to remain a Sixer for years to come. If not, Sam Hinkie will have him shipped out of town for a bunch of second-round picks that won’t even make the preseason roster.

2. What are the team’s biggest strengths?
Last season, the Sixers ranked in the top 10 in five major statistical categories. They placed 1st in steals (tied with the Milwaukee Bucks), 2nd in forced turnovers, 4th in blocks, 5th in personal fouls, and 9th in overall free-throw attempts. Although the win column doesn’t reflect their hustle, the 76ers biggest strength is their activity! They’re not afraid to get after it defensively. They’re not afraid to scrap and they are certainly aren’t afraid of attacking the basket. The stats prove it. My high school coach always told me that “quick feet and swift hands win basketball games.” The Sixers have both. Unfortunately, they’re an atrocity on offense, which causes their defensive intensity to go unnoticed.

Another major strength lies in Sixers head coach Brett Brown. As a longtime assistant with the San Antonio Spurs, Brown learned under the stewardship of Gregg Popovich and has incorporated a variety of Popovich’s coaching techniques and philosophies into helping rebuild the 76ers franchise. Despite having a 37-127 head coaching record, Brown is revered amongst the NBA community. He’s a player’s coach, a builder of raw talent; the perfect fit for this inexperienced, untested, 76ers roster. Seeing how he and Popovich were able to develop a young Tim Duncan, Tony Parker, and Manu Ginobili, I can’t wait to see what he does with Nik Stauskas, Nerlens Noel, and Jahlil Okafor.

3. What are the team’s biggest weaknesses?
Holy crap, where should I begin?? Well for starters, even with Nik Stauskas in the lineup, the Sixers are still an horrifically bad shooting team. Their opening night starting lineup will consist of Isaiah Canaan (37.7 FG %), Jerami Grant (35.2 FG %), Hollis Thompson (41.3 FG %), Nerlens Noel (60.9 FT %) and Jahlil Okafor (51.0 FT % at Duke). Not to mention, Tony Wroten (40.3 FG% & 26.1 3PT %) and Robert Covington (39.6 FG %) who will both play significant minutes once they return from injury. Just imagine playing NBA2k and having the “ice cold” symbol on you the entire game. That’s the Philadelphia 76ers! They can’t shoot! If Tony Wroten had to make an open three-pointer to save humanity, we’d all be dead. As for the reason why; just blame it on their youth. The Sixers are juvenile and inexperienced. They haven’t had enough time to fully develop their offensive skills on a professional platform. We can make a million excuses, but at the end of the day, basketball is about putting a ball into a hoop, and the 76ers are God awful at it.

4. What are the goals for this team?
It depends on who you’re asking. If you’re Sam Hinkie, the goal is to tank and secure a top-five draft pick (hopefully a point guard) that will be able to throw lob passes to Nerlens Noel and run the pick-and-roll with Jahlil Okafor. If you’re Brett Brown, the goal is development and growth. Learn from past mistakes, mature as a player and continuously progress as a team. If you’re a 76ers player, the goal is to pad the hell out of your stats and look good for the opposing general managers who will want to sign you once the season is over. I’m dead serious! Sixers players need to realize that their time in Philadelphia is short; one season, two max. As soon as their contracts expire, Sam Hinkie will show them the door and these players will have to find a job somewhere else. Their stats will be their resume, so they better make them look damn good, or else they’ll be somewhere in China playing basketball with Stephon Marbury.