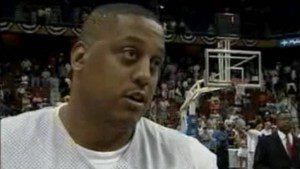 Image courtesy of the NBA/YouTube.

A former NBA player who starred at the University of Connecticut faces sentencing in New Jersey in a federal fraud case.

Tate George was convicted two years ago on four counts of wire fraud after a jury in Trenton found him guilty of running a real estate Ponzi scheme.

Some of the scheme’s victims included former professional athletes and celebrities. One of them, former NBA player Brevin Knight, allegedly lost $300,000.

George played for the NBA’s New Jersey Nets and Milwaukee Bucks. He’s best remembered for a buzzer-beating shot for UConn in a 1990 NCAA tournament game against Clemson.

The U.S. attorney’s office contended George persuaded victims to invest in real estate opportunities by lying about his company’s assets and projects, then took their money and used it for personal expenses and to pay off earlier investors. Centre Daily Times