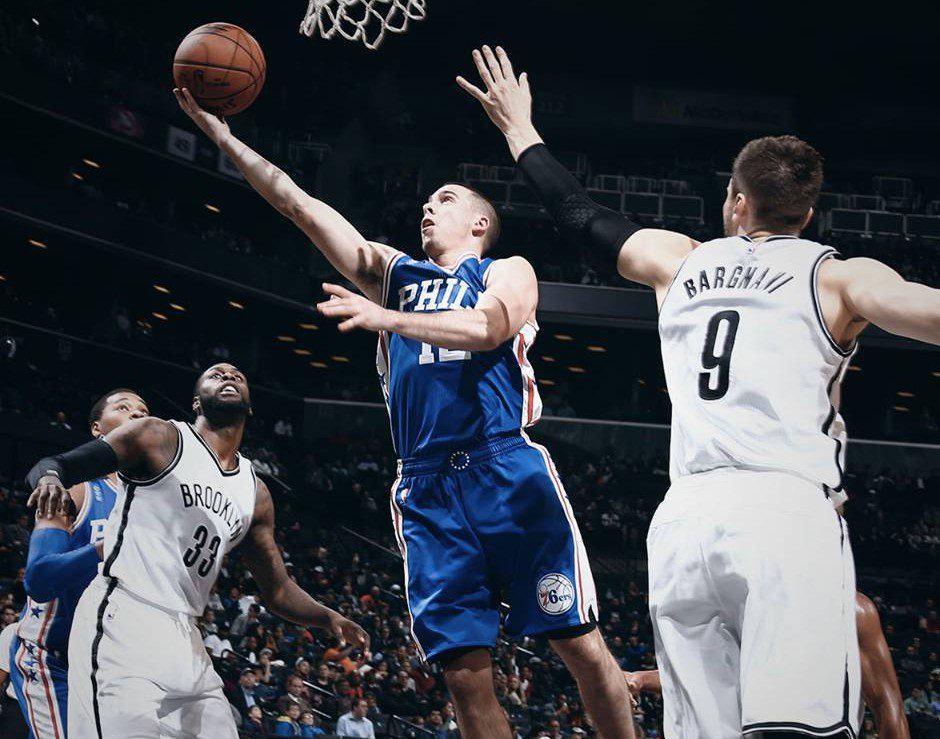 Led by Jahlil Okafor’s 22 points and a career night from T.J. McConnell (17 pts, 3 stl) the Philadelphia 76ers turned a 16-point 2nd quarter deficit into a four-point lead entering the final period against the Brooklyn Nets. Ultimately, foul trouble and Brooklyn’s strong bench play proved to be too much for the youthful 76ers as they were defeated 100-91, dropping Philly to 1-22 overall and 0-13 on the road. It was another crushing defeat for the Sixers who have lost their last four games, including a 51-point beat down to the San Antonio Spurs, after defeating the Lakers on December 1st.

1st Quarter
Tied at nine midway through the 1st, the Nets went on a 15-4 run to end the quarter, holding the 76ers without a field goal for the final seven minutes of the period. The Sixers were ice cold to begin the game, connecting on only 5-24 (20.8%) field goal attempts and going 0-10 from downtown in their first twelve minutes of action. After the 1st quarter, Philly trailed 24-13 as Sixers’ reserves Jerami Grant, Nik Stauskas and T.J. McConnell were held scoreless on 0-9 FG and 0-6 from beyond the arc. Okafor wasn’t much better, as he managed only 2 points, missing on four of his first five shots. The Nets on the other hand, shot an efficient 10-22 (45.5) from the field led by eight first-quarter points from Bojan Bogdanovic who started in place of Rondae Hollis-Jefferson as he recovers (8-10 weeks) after undergoing ankle surgery on Wednesday.

2nd Quarter
If the 76ers have proven anything this season, it’s that they’ll fight and claw their way back into ballgames. They might not win, but at least they make it interesting. After the Nets took a 29-13 lead off of a quick 5-0 run to begin the 2nd quarter, T.J. McConnell, who entered the game with only 10 three-pointers made all season, drilled consecutive shots from downtown, followed by a third from Jerami Grant (9 pts, 8 rbs) to cut the Brooklyn lead down to 8 entering the half. The Sixers scored 31 points in the 2nd quarter on 11-24 (45.8%) shooting, while connecting on three of their final four shots from beyond the arc after missing their first 15 attempts. Richaun Holmes led the way for the 76ers with 10 first-half points on 3-4 FG (4-4 FT) in eight minutes of play, while Okafor contributed eight and Tony Wroten added seven.

3rd Quarter
Carrying momentum from the end of the first half, the Sixers entered the 3rd quarter aggressively as Jahlil Okafor ran off six quick points in the opening minutes to cut the Nets lead to two. Brook Lopez, who looked helpless against the stronger, bulkier Okafor, picked up two quick fouls against the Sixers rookie and was forced to sit, allowing the Sixers to take advantage of the Nets’ lack of size in the paint. After a Thaddeus Young (18 pts, 11 rbs) layup and a three-pointer from Joe Johnson (7 pts) extended the Brooklyn lead, the Sixers went on an 8-0 run capped off by a T.J. MConnell jump shot to tie the game at 58 with 6:01 remaining in the quarter. The rest of the quarter belonged to the always active Jerami Grant, who locked down Joe Johnson and scored six points in the final minute to help the 76ers take a 74-70 lead entering the 4th quarter.

4th Quarter
Leading by as many as six, Philadelphia looked well on their way to securing their second win of the season. Unfortunately, foul trouble, spotty shot selection, and stiff defense got the best of the 76ers, and as we’ve become so accustomed to watching, the Sixers fell victim to another 4th-quarter lead.

With the 76ers leading by four entering the final period of play, Brooklyn went on a furious 13-4 run, sparked by Shane Larkin’s eight points, including two “And-1’s”, in the opening minutes of the 4th quarter. Despite Larkin’s brilliance, the quarter belonged to Andrea Bargnani, the former 1st overall pick in the 2006 NBA Draft, who’s versatility and hot shooting put the nail in the coffin for the 76ers. As Brook Lopez sat with foul trouble, the veteran Bargnani took the younger, less experienced Jahlil Okafor to school, scoring 13 of his 23 points in the final period, rallying the Brooklyn bench into an offensive frenzy as the second unit scored 24 of the Nets’ 30 fourth-quarter points.