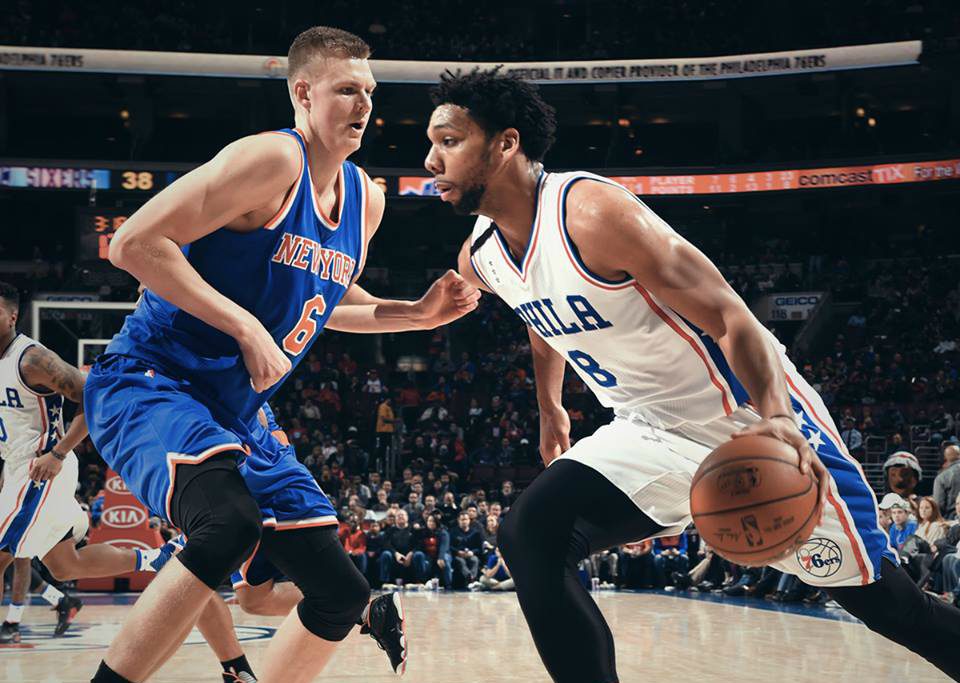 They say “numbers never lie”, but take a look at the final score of Friday night’s matchup between the Philadelphia 76ers and New York Knicks and you will be deceived. The 76ers, who had lost their previous six games by an average of 22 points, came out the gates shooting 1-11 (9%) from three and 1-7 (14.3%) from the foul line as the Knicks, led by Carmelo Anthony (16 pts, all in the 1st half) and Aaron Afflalo (22 pts), took a commanding 65-44 lead into halftime. The Sixers would trail by as many as 30 in the 2nd half, but were able to make the deficit look respectable as they outscored New York 29-9 in the final eight minutes of regulation. The 107-97 loss dropped Philadelphia to 1-27 on the season and gave the Knicks their thirteenth win after totaling only 17 all of last year.

Okafor vs. Porzingis
Kristap got the win, but Jahlil had the better stat line. After dominating the Sixers for 17 points and 10 rebounds two weeks ago, Porzingis had a much quieter outing Friday night totaling only eight points (3-9 FG) and four rebounds in 26 minutes of action. Even so, that didn’t stop the thousands of Knicks fans in attendance from flooding the Wells Fargo Center with chants of “PORZINGIS” every time the 20-year-old Latvian sensation touched the ball. Okafor, his rookie rival, who missed the Sixers first matchup against the Knicks on December 2nd due to suspension, aggressively looked for his shot all night, tallying a game high 17 shot attempts (9 made) for a team leading 20 points and five rebounds in 30 minutes. Unfortunately, the two future superstars only guarded each other for a few minutes in the 2nd quarter as Porzingis rested most of the second half with the Knicks up by double figures.

Know Your Role
The Knicks’ role players were spectacular all night. With Carmelo Anthony struggling (4-14 FG), New York got a huge lift from Aaron Afflalo who scored 22 points (9-13 FG) and grabbed seven rebounds in 25 minutes. Afflalo, who was coming off of a 29-point effort against the Minnesota Timberwolves, spent most of the game being guarded by the 6’0 Isaiah Canaan (14 pts), which allowed him to shoot and drive to the basket at will. Derrick Williams, the former number two pick in the 2011 NBA Draft, added 17 points (7-11 FG) and three rebounds off the bench, while Kyle O’Quinn filled the stat sheet (10 pts, 7 rebs, 5 asts) and did a commendable job guarding Jahlil Okafor with Porzingis and Robin Lopez on the bench.

The Sixers bench was solid as well. Tony Wroten scored a season high 15 points, although he was sloppy at times, committing seven of the team’s 15 turnovers. Hollis Thompson, who has really struggled with his shot, averaging only 3.6 ppg (28.5% FG) in his last seven games, broke out of his slump with a 10 point and seven rebound effort. Richaun Holmes also scored 10 including four thunderous slams to add to his ever-growing collection of poster worthy dunks. While these numbers are encouraging for the struggling Sixers reserves, it should be noted that most of this work was done during garbage time against the Knicks’ second unit, while the game was already out of hand.

The Grant Brothers
Jerami and Jerian Grant faced off for the second time in their young NBA careers. The sons of Harvey Grant and nephews of Horace Grant both struggled in their brotherly matchup. Older brother, Jerian, scored only four points (2-6 FG) in 22 minutes off the bench for the Knicks. Jerami also struggled to find his rhythm contributing eight points on 2-8 shooting (0-3 from three) and had a layup attempt swatted by the 7’3 Kristap Porzingis which sent the thousands of Knicks fans in attendance into a frenzy. This season, Jerami has been able to establish himself as one of Philadelphia’s most reliable defensive stoppers. His 1.8 blocks per game is tied for 11th best in the NBA and because Robert Covington (3 points) and Tony Wroten missed significant time due to injury, Grant has often been called upon to guard opposing team’s best perimeter players.

Game Notes
• Nerlens Noel returned to the starting lineup after missing the previous two games with a left eye corneal abrasion. In 27 minutes, Noel logged eight points, five rebounds and a team high three blocked shots.
• The Sixers were outrebounded 49-36. For the season, Philly is the fifth worst (41.4 rpg) rebounding team in the NBA.
• JaKarr Sampson dislocated his right pinky finger in the 2nd quarter (he would return).
• The 76ers will travel to Cleveland to face the Cavaliers (17-7) on Sunday at 3:30 PM.