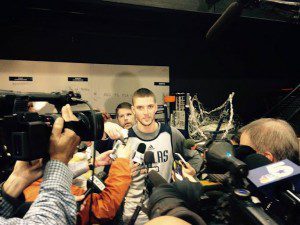 There were a lot of awe-inspiring moments during the Dallas Mavericks’ 97-88 win over the visiting Memphis Grizzlies: Chandler Parsons shining off the bench, JaVale McGee tacking on a season-high 18 minutes and slaying on defense AND offense, Zaza Pachulia’s 15th double-double of the season, finally seeing a decent lobs again (four of McGee’s five baskets were some Tyson Chandler/Brandan Wright worthy dunks), take your pick. But the one that packed the biggest WTF punch had to have been Dallas head coach Rick Carlisle’s post-presser following the win when talking about Parson’s journey back from his injury:

“Going through this whole ordeal with the surgery, the difficult summer of rehab, the difficulty in getting reconditioned – this is when you become a true professional. This is when you really find out what it’s all about,” Carlisle said of his small forward. “Everybody wants a nice cooked steak, but nobody wants to see you chopping up the cows in the back. The last four or fives months, Parsons has been in the back butchering the cows – that’s the kind of work he’s had to do. I think it’s an analogy that has some accuracy; sometimes things aren’t pretty.”

Yes, cows. And steaks. And murdering cows to get said steaks. Classic Carlisle.

Of course things aren’t pretty when you’re working your ass off to get back to the form you once had, but Parsons has been doing the butchering with a sense of grace, all while ignoring his naysayers who’ve been complaining about his skill set this season. In the sixth man role on Friday night, Parsons played just over 31-minutes, had 16 points, seven rebounds, and seven assists.

“It felt great,” Parsons said in the locker room of his contributions to the win. “I just competed, man. I played hard and coach has been on me to focus on defense and exhausting myself to make sure I get back into game shape until I feel 100 percent is going to be tough. Nights like this are a step in the right direction and it feels good.”

Along with the stand-out performances by McGee and Parsons, the big-guy Dirk Nowitzki put up 20 points, bringing him closer to passing Shaquille O’Neal for sixth place on the NBA’s All-Time Scoring list. Before Friday night’s game, Nowitzki needed only 50 points to pass Shaq, and now that magic number is down to 30. Fans are hoping that moment will arrive at home on the December 26 when the Mavericks face the Milwaukee Bucks, and not while they’re on the road days before. It seems more likely that Dirk may tone it down just slightly so he’ll be able to win the honor in front of his beloved fans in the house he spent his entire NBA career in.