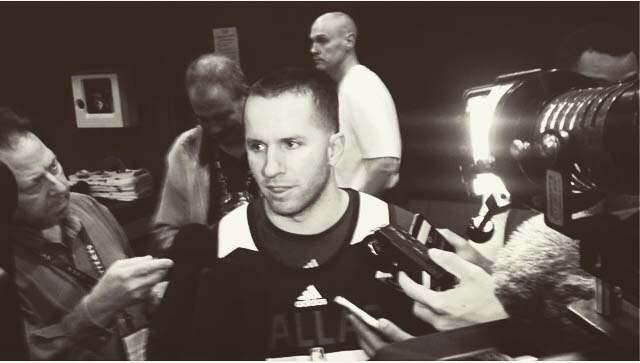 To those who are not Golden State Warriors fans, this is a shockingly impressive number. Abstruse to the normal human eye, the Dubs have performed a feat this 2015-16 NBA season that not many could do or aspire to do.

The thing is, it became utterly clear that the number one team in the league got there on the shoulders of one player.

Stephen Curry sat on the sidelines at the American Airlines Center on Wednesday night; his light eyes glued to the action on the court, his facial expression nonchalant as roars erupted around him, his body also somewhat insouciant amidst the loudness that ricocheted off the walls of the center. He watched as his team dug themselves into a hole that they alone couldn’t climb out of during the first half of the game. The Dallas Mavericks, lead by sometimes hobbit impersonator J.J. Barea, were out shooting Golden State 51.2 percent to a lowly 38.9 percent along with a stunning 25-17 rebounding advantage, which had led the Dubs to be down by 18 points going into the second half – the biggest halftime deficit for the strongest team in the West this season.

Curry wasn’t the only starter noticeably absent from the lineup. Harrison Barnes was also out for his 14th straight game, so it was up to Klay Thompson, Draymond Green, and Curry-shaped replacement Shaun Livingston to attempt to subdue the currently hot Mavericks. However, Barea (who was filling in for an injured Deron Williams) scored 23 points in the Mavs’ 114-91 win, and seemed to take full advantage of the fact that the Dubs were without their star.

The Mavericks just didn’t just beat the Warriors, they humiliated them.

“They were a little shorthanded tonight,” Devin Harris said post game. “That might have made a little difference.”

The usually grumpy and hard-on-his-boys Mavs’ head coach Rick Carlisle was even chipper following the annihilation…er, win. “From start to finish, the guys did a really good job,” Carlisle said. “I’m very happy we were able to win these three games.”

Curry’s absence was felt hard on the defensive end of the court as the Warriors just couldn’t find an answer to the Mavericks’ hot shooting.

Dallas joins the Milwaukee Bucks as the only two teams that have beaten Golden State this season, quite an elite short list to be a part of.

With this win, Dallas managed to pull off the impossible and made 19-13 look a hellva lot better than 29.2.

At least for now.