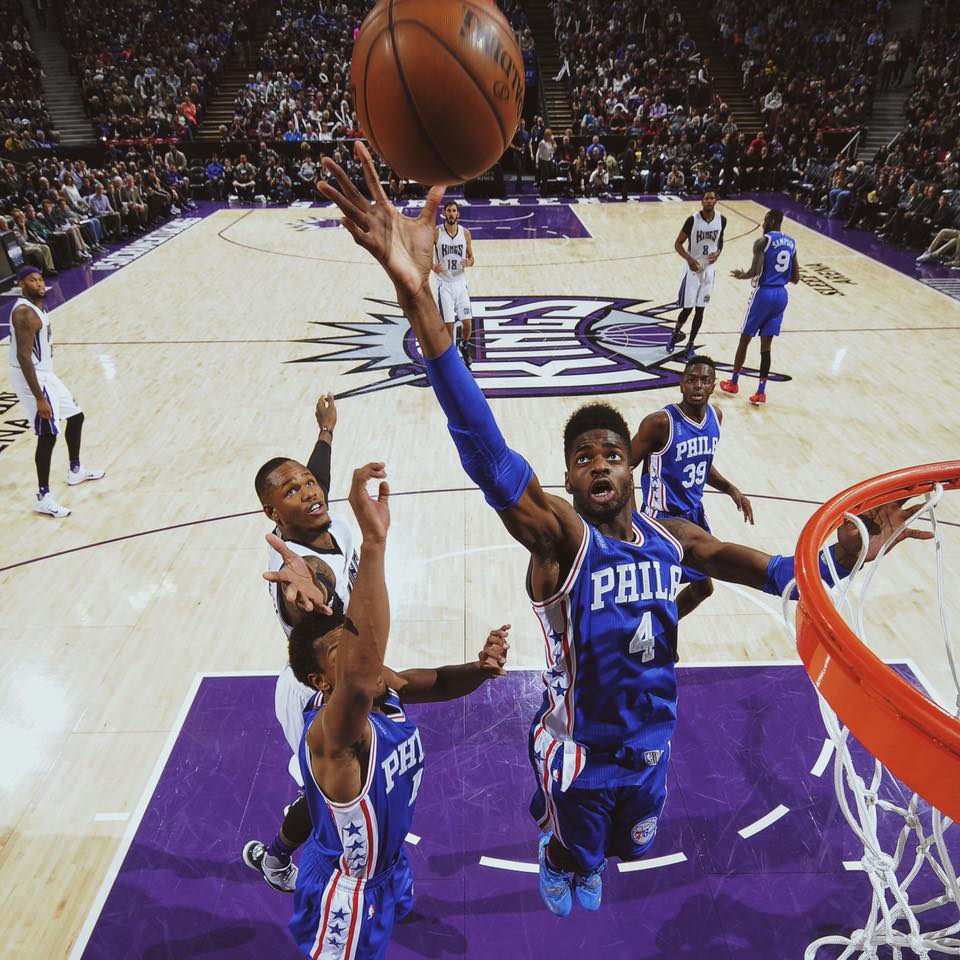 The Sixers are 3-31, but inside their locker room, you won’t find a single person who isn’t absolutely exuberant about what has transpired within the organization over the past week. Playing their best basketball of the season, the Sixers flew into Sacramento Wednesday morning with one goal in mind; end 2015 with a W. Trailing by as many as nine in the 2nd quarter, the 76ers fought back with a 16-5 run to tie the score at 57 entering the half. Philly carried this momentum into the 3rd quarter, outscoring the Kings 16-4 on four consecutive three-pointers to take a 12 point lead (73-61). Down, but not out, Sacramento refused to go away quietly, using a season high, 28 point (11-17 FG) performance from Italian sharpshooter Marco Belinelli to get them within two points late in the 4th quarter. Ultimately, the Kings would dig their own grave, turning the ball over 22 times as late buckets by Ish Smith and clutch free throw shooting from Jerami Grant helped Philly pull away 110-105 for their third win of the season. Head coach Brett Brown was all smiles after the game, telling reporters, “We’ve taken a lot of hits and if there is such thing as deserving to win, they deserve to win. They put in the work. They don’t blink. They don’t go away. They stay together. I’m proud of them. I think it’s just a real tribute to their perseverance to come away with a road win.”

Oakfor’s Return
Jahlil was back in the lineup after missing the previous two games with soreness in his right knee. Playing in a limited role off the bench, the rookie nabbed another double-double (10 pts, 10 reb), but was a rusty 4-11 from the field and 2-5 from the free throw line. For stretches, he was very active defensively on DeMarcus Cousins, not allowing him to get good position down low, while using his strength to force Cousins off the block and into contested jumpers.

The Alley and The Oop
Ish Smith and Nerlens Noel are quickly becoming one of the most exciting inside out combo’s in the NBA. Noel, who has looked out of place at times, has been brilliant since Smith’s arrival to Philly, averaging 17.3 points and 8.7 rebounds to accompany his three steals and two blocks over the last three games. Against the Kings, he continued his above the rim play, throwing down six dunks, most of which came off of a Smith assist.

As for Ish, what else can I say about him? In three games, Smith has helped deliver two wins and for the first time all season, he has the city believing again. Last night, he continued his stellar play with an 18 point (7-14 FG) and nine assist night, while turning the ball over only once in 32 minutes. Smith’s ability to penetrate the defense and dish the rock has been beneficial to more than just Nerlens Noel. Philly’s wing players have seen their production increase dramatically. Hollis Thompson scored 12 (all in the first half), Isaiah Canaan added 15, and Jerami Grant, who’s been quiet as of late, had his best outing of the season, scoring 16 points (4-6 FG, 6-8 FT), grabbing game high 11 rebounds and swatting five shots in 34 minutes. Grant, who is only shooting 21.5% from beyond the arc, also drilled two three-pointers to cap off the marvelous night for the second year forward out of Syracuse.

Missed Opportunities
The free-throw line was anything, but free for both teams Wednesday night. The Sixers made only 21 of their 34 attempts (61.8%), while the Kings connected on 25-41 (61.0%). DeMarcus Cousins had seven of those misses for Sacramento. This season, the 76ers rank 3rd last in the NBA in free throw percentage (69.3%) compared to the Kings who aren’t much better, shooting 71.6%, 5th worst in the league.

Game Notes
• Nik Stauskas made his return to Sacramento, a year after the Kings selected him eighth overall in the 2014 NBA Draft. The “revenge game” didn’t go according to planned as Stauskas managed to score only 3 points on 1-7 FG (1-6 from three) in 19 minutes.
• Sixers defense did a phenomenal job closing out on Omri Caspi, who was limited to 10 points (3-10 FG), two days after he lit up the Warriors for 36 points on 9-12 shooting from three.
• DeMarcus Cousins, who averaged a monstrous 36 points and 20.5 rebounds in two meetings with the Sixers last year, scored 21 points (4-10 FG, 13-20 FT) and pulled down 11 rebounds last night before fouling out.  After the game, a dejected Cousins complemented the Sixers, saying “That’s a young hungry team that just outplayed us. Straight up.”
• Rajon Rondo dished out a game high 14 assists, but accounted for seven of Sacramento’s 22 turnovers.
• The Sixers will continue their road trip on Friday against the Los Angeles Lakers at 10:30 PM.